Things To Do With Family 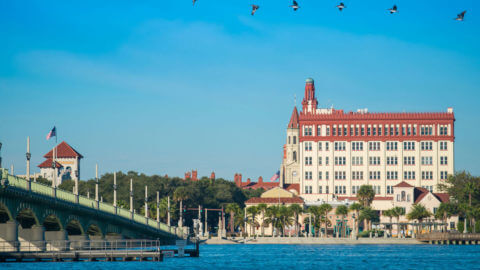 Things To Do In St. Augustine With Family

What has four centuries of history, magnificent beaches and the fountain of youth? St. Augustine. The nation’s oldest city has all this and so much more. Architectural wonders built by Henry Flagler, museums, iconic landmarks, quaint shops, exceptional restaurants… the list goes on. If you’ve come with the family, you’re all in for an amazing vacation experience. The Old Jail, that is! Built by Henry Flagler in 1891, it was designed to look like one of his fine hotels and is one of the few surviving 19th century jails. Prisoners were incarcerated here for more than 60 years. Take a guided tour led by an expert Deputy and step inside the men and women’s tiny cement cells – kids and adults alike are fascinated by how small the cells are. You can also see the living quarters of the Sheriff and his family; they lived right upstairs from the prisoners! There’s a collection of weapons that were used in actual crimes on display and one of the scariest sheriff’s ever known to mankind, Joe Perry is waiting to meet you.

The St. Augustine Pirate & Treasure Museum is for every kid that’s been fascinated with pirates – and the adults that still wish they were kids. Step inside and be transported back to the time when pirates scoured the seas for treasure, drew their swords and flew the skull and crossbones flag with pride. At this unique museum, you’ll take a journey back to 17th century, the era of the Golden Age of Piracy. See real pirate gold and one of the only authentic pirate treasure chests in the world. There are also high quality animatronics, interactive exhibits, a main deck, a lower deck, a gun deck and the execution dock. From firing a real cannon and witnessing the final battle of Blackbeard and Captain Kid’s final voyage to seeing real pirate movie paraphernalia, this is a museum experience your family will never forget. Take a ride on the Old Town Trolley! It’s the most popular sightseeing tour and shows you more than 100 different points of interest. The tour is led and narrated by hometown folks who not only live in St. Augustine, they’re also history experts. So while you’re traveling throughout the city, you’ll be treated to funny stories and really interesting facts about the famous and infamous people and places that have shaped the city. You’ll see the Spanish Quarter, the Oldest Wooden School House, the Flagler Memorial Presbyterian Church, Grace United Methodist Church, the Castillo de San Marcos, St. George Street and so many more things to do with family. Get off, get back on or hang out at any of the 23 stops as long as you want. Trolleys come along all day so take your time enjoying all the St. Augustine attractions. The St. Augustine Lighthouse and Museum is a fun and educational outing for the family. Built in 1874, the lighthouse rises 165 feet above sea level and has 219 steps. Kids love climbing to the top and checking out the incredible views of the city and the ocean below. And there’s a walk-in kaleidoscope that they can play in and learn about the science of how the lighthouse works, learn to tie sailor’s knots and play in the shipyard playground.

Immerse yourself in St. Augustine’s history at the Spanish Quarter

Take a captivating journey with your family through the city’s rich history. Participate in a musket drill or climb to the top of a 17th century watchtower for a fun and memorable vacation experience. You can even dine on authentic 18th century British and Spanish food after a day of exploring the Spanish Quarter. Don’t miss out on this St. Augustine must-do in the heart of the historic district.

Fun for the young & young at heart in the ancient city

For a family vacation that has something for everyone in your crew, St. Augustine has it all and more. After you’ve taken the Old Town Trolley Tour, visited the Pirate & Treasure Museum and seen the many historic attractions, spend some time on Crescent Beach or any of the other unspoiled beaches in the area. It’s the perfect ending to an unforgettable family getaway. Old Town Trolley Tour
Up Up
Back to top
We use cookies to give you the best experience. By using our site, you agree to our cookie policy.Ok