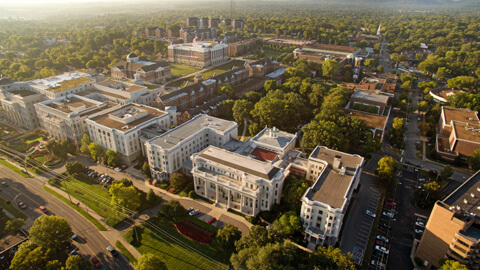 Wealthy Nashville socialite, Adelicia Acklen built Belmont Mansion in 1850. She sold the elaborate antebellum home and surrounding estate 37 years later. The property became home to the Belmont Seminary for Women. After the turn of the 20th century, the school merged with the prestigious Ward Seminary for Young Ladies. The school was the setting for the city’s first radio broadcast in 1922. Approximately 30 years later, the Tennessee Baptist Convention purchased the school and laid the foundation for today’s Belmont University. The school desegregated in 1965 and became a nonaffiliated Christian university in 2007.

The campus hosted a visit by President Franklin Roosevelt and his wife during the Great Depression and a presidential debate between candidates Barack Obama and John McCain in 2008. The university is open for guided campus tours Monday through Friday, except school holidays, as well as four select Saturdays during the academic year. Campus maps are available for self-guided tours. The university can provide information regarding the location of visitor parking lots. Because spaces are limited, the best way to visit the campus is to ride the Old Town Trolley. You do not have to worry about city traffic or a place to park. Hop off the trolley and tour the campus at your own pace. When you are ready, you can climb aboard the next passing trolley.

Points of interest on campus include the Belmont Mansion, the Bell Tower and the Gallery of Iconic Guitars.

Belmont Mansion is a historic house museum containing an art gallery and period furnishings. The grounds feature lavish gardens and various gazebos. Formerly the estate’s water tower, the historic bell tower is the iconic symbol of the university. Used as a signal tower during the Civil War, it houses the first carillon in Tennessee. The Gallery of Iconic Guitars located inside the Lila Bunch Library displays several famous stringed instruments. Music Row is located north of the campus. Home to numerous businesses related to the country music industry, it is the setting for Owen Bradley Park and the large Musica Statue. The famed RCA Studio B, where hundreds of hit songs were recorded, offers daily tours.

Located south of the university, the Belmont-Hillsboro neighborhood contains numerous older homes displaying a variety of architectural styles, including Tudors and early 20th-century bungalows. The neighborhood is listed on the National Register of Historic Places.

The 12 South neighborhood contains a variety of shops, boutiques, eateries and live music venues. It is the setting for the famous Imogene and Willie clothier, which operates in the renovated Granny White Service Station.