Things to Do with Family Nashville is a large modern city that retains the quaint ambiance of the American South. Known as Music City, it combines urban sophistication with small town charm. Nestled on the banks of the Cumberland River, the city skyline is set against a backdrop of lush rolling hills. Nashville is a world-renowned vacation destination that attracts music fans and history buffs alike. The city boasts acclaimed museums and major league sports franchises as well as an eclectic food and music scene. With revitalized areas like the Gulch and the District, Nashville is a vibrant as well as historic city. With so much to see and do, finding an attraction, museum or tour that appeals to each member of your family won’t be hard. Follow this guide for the best things to do in Nashville with family and start making memories!

Whether it’s your family’s first time to Nashville or you call Music City home, a land tour or water cruise is a great way to see the city. The best part is you’ll be able to experience it together. Old Town Trolley is the ideal way for a family to see the best that Nashville has to offer. Enjoy a relaxing ride through town while listening to the conductor deliver a fun and entertaining narration about the city’s most popular and lesser-known attractions. The trolley is a great way for everyone to see Nashville’s attractions together. With hop-on and hop-off privileges at 15 stops, you can also use the Old Town Trolley to reach your favorite attractions with minimal walking.

Explore your favorite attractions at your own pace and then hop aboard the next trolley to continue your tour. 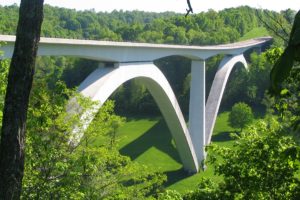 Discover the natural beauty surrounding Nashville as you drive along the Natchez Trace Parkway during the spring and summer foliage seasons. In addition to the vibrant colors, you may spot various species of wildlife that call the forest home. The protected ecosystem is the habitat for more than 130 types of birds as well as deer, fox and coyote.

Imagine yourself as a character in a Mark Twain novel as you ply the Cumberland River aboard a paddle-wheel riverboat cruise. Enjoy scenic waterborne views of the city skyline and surrounding landscape. During the day, the cruise features family-friendly dining and entertainment in their Victorian-era style theaters.

Immerse yourself in the history of a uniquely American art form at the Country Music Hall of Fame and Museum. Opening at its present location on Fifth Avenue South in 2001, the museum exhibits a range of artifacts and memorabilia as well as interactive displays designed to entertain and enlighten visitors.

Housed in the National Landmark Old Post Office on Broadway, the Frist Center for the Visual Arts hosts an ever-changing schedule of traveling exhibits throughout the year. This world-class art venue also features the Martin ArtQuest Gallery, an interactive space with 30 hands-on stations where children can create their own works of art.

Travel back in time at the Tennessee State Museum and discover the history of the Volunteer State from the Paleolithic Period through the 20th century. Situated inside the James K. Polk Cultural Center, the museum highlights the Age of Jackson as well as the tumultuous Civil War period. The collection includes paintings, military artifacts and local crafts.

Walk on the wild side and visit the Nashville Zoo at Grassmere, which is home to hundreds of animal species from around the world. Along with the animal displays, the zoo has a carousel and large play area with slides, swings and climbing nets. There is also a historic plantation home with landscaped gardens.

Let the kids run around while the adults chit chat about dinner plans with a trip to these outdoor green spaces. Major attractions in downtown Nashville include Riverfront Park, which features a playground, an expanse of green lawn and the Ascend Amphitheater. The facility’s stage hosts a wide range of musical performances during the year. Cross the nearby John Seigenthaler Pedestrian Bridge to Cumberland Park where you can enjoy spray fountains, a climbing wall and butterfly garden. Centennial Park is the setting for the Parthenon, a scale model replica of the ancient Athenian temple. The Parthenon houses works of art as well as the ornate statue of Athena. The park has a lawn for various ballgames, a duck pond and a band shell that hosts a variety of performances, including Shakespearean plays and children’s puppet shows.

The park is also the location for various festivals that often include hands-on demonstrations.

Bicentennial Mall State Park first opened in 1996 and is a 19-acre park with an outdoor museum. The large open green space can be used for games and picnic lunches. While the amphitheater hosts various performances, the park is the setting for several festivals during the year.

Nashville Shores is a water theme park featuring a sandy beach, a lazy river ride and several water slides. Family members can swim and relax in the sun or enjoy the adrenaline-pumping action of the thrill rides. The adjacent Treetop Adventure Park has 100 challenging obstacles like ziplines, cargo nets, suspended bridges and Tarzan swings. The thrilling elements can provide a unique bonding experience for your family.

Nashville boasts a wide range of cafes, restaurants and other eateries. If your family craves down-home cookin’, Music City has you covered. Many eateries feature “a meat and three” menu, which is common in the South. Each family member can pick his or her preference of one meat from a daily selection of 3 to 6 choices and combine it with three side dishes from a list that may include up to a dozen options. Available throughout the country, this menu combination traces its roots to Nashville. You can also dine in country kitchens like Puckett’s Grocery and Restaurant that feature live music as well as savory Southern comfort food like biscuits and gravy, fried chicken and slow-smoked barbecue. Your family’s entertainment fans will enjoy visiting places that have served as the backdrop for scenes of their favorite television shows, movies and music videos. Located downtown and built in 1909, the iconic John Seigenthaler Pedestrian Bridge has appeared in the background of numerous country music videos. Opening in 1982, the Bluebird Café is the inspiration for the movie “This Thing Called Love” as well as the hit TV show “Nashville.” While the historic Ryman Auditorium was home to the Grand Ole Opry for 30 years, the distinguished Hermitage Hotel was used for scenes from “Nashville,” “Master of None,” “The Hannah Montana Movie” and “Country Strong.” RCA Studio B is the venue where Elvis Presley and many other legendary musical performers recorded hundreds of hit records. Sports fans will enjoy joining the crowd as they cheer on their hometown teams. The NFL’s Tennessee Titans along with the Tennessee State Tigers play at the multipurpose Nissan Stadium. It is located on the eastern shore of the Cumberland River across from downtown. Hockey fans will enjoy watching the Predators of the NHL play inside the downtown Bridgestone Arena. If baseball is your family’s favorite sport, they can watch the Nashville Sounds, the Triple-A affiliate of the Oakland Athletics. These future stars play at First Tennessee Park situated just north of downtown. Families will enjoy attending one of the various festivals and cultural celebrations held in Nashville throughout the year. Music City hosts one of the largest Independence Day firework displays in the nation. The city also holds the annual Hot Chicken Festival honoring Nashville’s signature dish. Music City is home to rides, midway games and other events of the State Fair. These festivals often include a range of food, music, games and other activities for the whole family.

While the summer can be hot and humid, the pleasant spring and fall weather offers warm days and cool evenings. This requires dressing in layers, so bring a variety of clothes. And don’t be fooled by this southern locale, winter temperatures can stay below freezing throughout the day. You’ll find Music City to be more crowded from April through October during the peak tourist season. No matter when you visit, family fun abounds in Nashville. Hop on the Old Town Trolley for convenient and safe travel between major points of interest. You can sightsee, learn the history of Nashville and create lasting memories together aboard the trolley. And don’t be surprised if a stranger strikes up a conversation. Nashville is ranked as one of the friendliest cities in the country.

With so many things to see and do, Nashville is a great vacation destination for families of all ages and interests. Music City offers something that will please every member of the family!