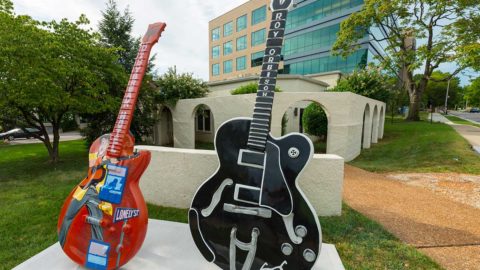 Situated southwest of downtown, Music Row is home to several businesses and attractions related to the city’s musical heritage. Considered the heart of Nashville’s entertainment industry, the Music Row area is centered on 16th and 17th Avenues South, which are known as Music Square East and West respectively. Points of interest in the district include the historic RCA Studio B, Columbia’s Historic Quonset Hut, the first recording studio on Music Row, and Owen Bradley Park as well as numerous shops and upscale eateries. “Musica,” a large bronze statue designed by Alan LeQuire, is the centerpiece of the Music Row Roundabout.

Known as Music City, Nashville boasts numerous exciting attractions and down-home eateries as well as famous honky-tonks, dance clubs and other live entertainment venues. It has grown from a backcountry trading post to the Country Music Capital of the World. The city’s vibrant ambiance and Southern hospitality are always on full display.

Developed in the 1950s, Music Row is considered the hub of the city’s entertainment industry. The neighborhood attracted music industry firms after WSM announcer David Cobb referred to Nashville as “Music City, USA” during a broadcast in 1950. As the moniker became widely accepted, the city rapidly grew into one of the nation’s top centers for music recording and publishing. With the signing of Elvis Presley, RCA Victor realized the need for a branch office in the southeast. They chose Nashville and built the historic RCA Studio B, which has played a role in the careers of numerous legendary performers. Owen Bradley, a staff pianist at WSM and RCA studio executive Chet Atkins were instrumental in developing the “Nashville Sound,” a smooth and sophisticated crossover style of country music, on Music Row in the mid-1950s, which has evolved into the fusion of country music and soft rock known as country pop.

Along with radio stations and networks, the neighborhood is the setting for recording studios, publishing houses, music-licensing firms and other organizations like video production houses that serve the music industry. As a result, Music Row is synonymous with the country music industry just as Madison Avenue is used to refer to the advertising industry and Hollywood means movies and television. Many of the offices are housed in the neighborhood’s beautiful old 19th-century homes and mid-20th-century office buildings. The area was once the home of the Country Music Hall of Fame as well as several other smaller museums dedicated to individual stars of the musical genre. After the Hall of Fame moved to its current location in 2001, the museums were replaced with upscale shops, clubs and restaurants.

Open for public tours, RCA Studio B is listed on the National Register of Historic Places. The setting for hundreds of hit recordings by legendary artists like Elvis Presley, Dolly Parton and Willie Nelson, it played an instrumental role in the development of the Nashville Sound. While Presley was recording a Christmas album one July, the studio crew hung a string of colored lights from the ceiling to help the King get into the holiday spirit. The lights are still present in the recording studio today.

Owen Bradley opened Columbia’s Historic Quonset Hut, the first recording studio on Music Row, in 1954. They attached the Army surplus hut to a house he bought at 804 16th Avenue South, which was converted into a music and video recording space. It was the setting for hits like Patsy Cline’s Crazy and Bobby Vinton’s Blue Velvet. Other musical acts to record here include Bob Dylan, Johnny Cash and Simon and Garfunkel. The building was converted into office space in 1982. Philanthropist Mike Curb purchased the building 24 years later and restored it for use as a recording studio and classroom for Belmont University.

Owen Bradley Park is a small urban open space dedicated to this influential musician and producer. Located on 16th Avenue South near its intersection with Division Street, the park opened in 1997. The recreation area features a life-size bronze depiction of Bradley sitting at a piano. The brainchild of Gary Smith, the artwork was unveiled in 1999. You can sit on the bench beside the country music producer’s statue for a unique photo opportunity.

Unveiled in 2003, “Musica” is a large bronze statue designed by Nashville-native Alan LeQuire. The 40-foot-tall sculpture is the centerpiece of the Music Row Roundabout where 17th Avenue South meets Division Street. Depicting nine disrobed male and female figures dancing in a circle atop a base of limestone boulders, it is the largest bronze group statue in the nation. Representing hundreds of singers and songwriters around the world, the American Society of Composers, Authors and Publishers (ASCAP) was created to protect the copyrights of musical artists. ASCAP licenses, collects and distributes royalties for their members’ copyrighted materials. The organization also honors its top members by hosting a series of annual award shows in musical genres ranging from pop and soul to Christian. The organization is headquartered on Music Square West. Founded in 1939, Broadcast Music, Inc. (BMI) is the largest musical rights organization in the world. It collects and distributes licensing fees and royalties in order to protect the copyrights of the organization’s members. From its headquarters on Music Square East, BMI tracks over 10 million performances of its licensed works worldwide by radio stations, nightclubs and digital music providers. The organization sponsors an annual awards gala to honor its top members. Little Sisters of the Poor

Little Sisters of the Poor Home for the Aged is an E-shaped Renaissance Revival-style building that was constructed in 1916. The building complex occupies a more than 2-acre site on Horton Street bounded by 17th and 18th Avenues South. The main four-story building is listed on the National Register of Historic Places as a significant example of early-20th century architecture. The Little Sisters of the Poor, a Catholic relief agency, ran the home for five decades. The repurposed buildings house offices for BMG Music Publishing. Live music and video performances take place in the former chapel, which has been restored and converted into a concert hall. Founded by Mike Curb in 1964, Curb Records is a major independent music label headquartered on Music Square East. The label’s hit recordings include songs by renowned artists like Roy Orbison, Tim McGraw, LeAnn Rimes and the Judds. In addition to restoring Columbia’s Historic Quonset Hut, Curb has been instrumental in establishing the Johnny Cash Museum. Curb’s work has been honored with a star on the Music City Walk of Fame.

Leave the kids, kick back, and cruise through Music City enjoying scenic nighttime views and classic Nashville tunes. On this tour, you’ll not only be taken to popular points of interest, but talented guides will dazzle you with their musical talents and extensive historical knowledge of the city. The tour is a perfect choice for date night or a group outing and a definite must-do when in Nashville! Located on the campus of Belmont University, the Belmont Mansion is an Italianate Villa-style mansion constructed in the mid-1800s. Built by Adelicia Hayes Franklin, the home was designed by architect William Strickland, who also planned the Tennessee State Capitol. The largest house museum in Tennessee, the ornate mansion features period furnishings, Venetian glass and a variety of artwork. It was added to the National Register of Historic Places in 1971.

Influenced by the architecture of the ancient Lighthouse of Alexandria, the Belmont Carillon was originally the water tower for the Belmont estate. Housing a 43-bell carillon, the iconic bell tower is prominently featured on the Belmont University logo.

Opening in 1925 as a silent film movie house, the Belcourt Theatre once served as the home for the Grand Ole Opry and the Nashville Children’s Theatre. This historic performance venue hosts live productions as well as an annual film festiva. Soul of Music City Tour
Up Up
Back to top