Constructed between 1835 and 1840 by Charles Cluskey, this Savannah historic landmark and museum is considered to be one of the finest examples of Greek Revival and Regency architecture in the area. The Sorrel-Weed House was constructed for Francis Sorrel, who was a prominent commission merchant to the West Indies. Many well known people have visited the home, including General Robert E. Lee, who was a long standing friend of Francis Sorrel.

Also on Madison Square, you will find several businesses and other historic places. Caddy-corner to the Sorrel-Weed House is the Green Meldrim House, built by architect John Norris between 1853 and 1861. It is a beautiful Gothic Revival style home that served as Sherman’s Headquarters in Savannah until the end of the Civil War. Today, it is used as the rectory for the St. John’s Episcopal Church next door.

Nearby St. John’s Episcopal are two SCAD buildings. One, located in the 1926 Scottish Rite building, is Gryphon Tea Room. Gryphon boasts a café menu with seasonal and local offerings. Across the street is the Shop SCAD store, which features student, alumni, and faculty artwork and goods for purchase – all inside the old Savannah Volunteer Guards Armory built in 1893 by William Preston. 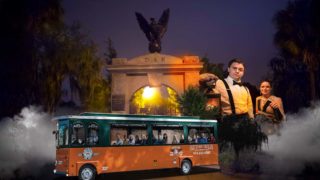 Andrew Low House
Up Up
Back to top