How to See Nashville in 1 Day As the vibrant capital of Tennessee, Nashville has earned several monikers over the years. Once a sparsely settled trading post founded in 1779, the cosmopolitan city is now a popular tourist destination. A leading center of higher education for more than 100 years, it was dubbed the Athens of the South in the 19th century. Because of its reputation as a mecca for singers and songwriters as well as its music publishing industry, Nashville is also heralded as the Country Music Capital of the World. The area centered on the intersection of Second Avenue and Broadway is a popular destination for locals and tourists with its shopping, dining and entertainment venues.

More than 13 million people visit Nashville annually. People from around the world come to view the Music City’s cultural attractions and experience its vibrant dining and entertainment scene. Whether you are a country music fan, a history buff, an art lover or foodie, you will find something wonderful and memorable during your visit. If you only have one day to explore Nashville, hop aboard the Old Town Trolley for an entertaining and informative narration while you travel to these must-see sights and attractions.

Load up on Caffeine and Calories

Start with breakfast at Another Broken Egg on Commerce street.  Stop by our booth at 201 Broadway for directions.

Do You See the Cadillac Tail Fin?

At the Country Music Hall of Fame and Museum, you will learn more about the music and legendary artists who transformed Nashville into the Country Music Capital of the World. The building’s state-of-the-art design looks like a bass clef when viewed from above and a classic Cadillac tail fin if viewed at street level. The arrangement of the tall windows evokes the image of piano keys. Inside the museum, there is a variety of interactive exhibits and galleries that are filled with a mix of artifacts, memorabilia and historic videos that highlight the careers of numerous country music legends. After you finish your visit at the Hall of Fame, cross the street and follow the Walk of Fame back toward Broadway. View the inlaid stars honoring Nashville natives who have made a significant contribution to the city.

Discover the Music That Made Nashville Famous

The Ryman Auditorium, registered as a National Historic Landmark, is located on Fifth Avenue behind Jack’s Bar-B-Que. Tour the 2,362-seat performance venue that was the address of the Grand Ole Opry for three decades. Trace the steps of music royalty, stand center stage and visit the dressing rooms as you learn the fascinating story behind this former gospel tabernacle and its rebirth after it was saved from demolition. You can also make your own demo CD. After exploring the Mother Church of Country Music, walk four blocks south to the Country Music Hall of Fame and Museum.

Refuel During a Lunch Break

Grab a bite of Southern comfort food at Jack’s Bar-B-Que. This stopover features authentic Southern style ribs, sweet tea and delicious sides like baked beans, potato salad and coleslaw. You will feel right at home in this down home neighborhood eatery. When you are finished, tour the nearby iconic Ryman Auditorium.

Set the Stage with Tennessee’s History

Start the day by visiting the grounds of the Tennessee State Capitol to learn more about the history of the Volunteer State. One of the oldest working capitols in the nation, the Greek Revival-style building was designed by renowned architect William Strickland and completed in 1859. The surrounding grounds feature statues of Presidents Andrew Jackson and Andrew Johnson as well as the Medal of Honor recipient Sergeant Alvin York and boy hero of the Confederacy, Sam Davis. There is also the tomb of President James Pole and First Lady Sarah Polk. Walk the Pathway of History

Located near the capitol, the beautifully landscaped 19-acre Bicentennial Mall State Park is the setting for the Pathway of History, a 1,400-foot-long wall engraved with significant events that occurred from 1796 through 1996. You can also see the 95-bell carillon and the Court of 3 Stars, which represent the musical heritage of the Volunteer State and the three main regions of east, middle and western Tennessee. The attraction has an inlaid map of the state detailing its geographic features, the Walkway of Counties and splash fountains representing the state’s major waterways. The World War II Memorial has a unique floating granite globe. After exploring the Bicentennial Mall, hop on the next Old Town Trolley as it makes its way to the Frist Center for the Visual Arts. 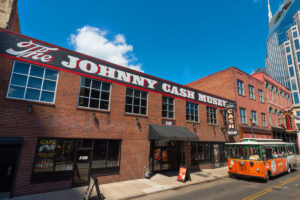 Housed in the landmark former post office building, the Frist Center for the Visuals Arts houses a selection of works by local, state and regional artists in a variety of media. A non-collecting museum, the 24,000-square-foot gallery also hosts renowned national and international traveling exhibits. Completed in 1934 by the Works Progress Administration, the white marble Art Deco-era structure features a unique blend of architectural details. The Grecian Moderne-style edifice is adorned with fluted pilasters and stone eagles as well as other classical elements and national symbols. It was listed on the National Register in 1984. After exploring the interesting pieces on display, board the Old Town Trolley to reach the eateries and entertainment venues along Broadway, like The Bongo Java Cafe at the Johnny Cash Museum, for a midday meal.

Finish the whirlwind day at the world-famous, 66,000-square-foot Wildhorse Saloon, which is located on Second Avenue near Riverfront Park. You can window shop as you stroll along Broadway toward the Cumberland River. The multilevel country and western-themed Wildhorse Saloon offers award-winning Southern smokehouse cuisine and live entertainment as well as free nightly dance lessons on the largest dance floor in the state.