Although it is steeped in art, culture and history, Nashville is known as the Country Music Capital of the World. It is a popular destination for fans of this uniquely American art form. For generations, music emanating from frontier fiddles and guitars has been the common thread connecting the life and soul of the city and its people. Immersing yourself in the cultural, business and social aspects of the genre is essential for understanding its importance in the story of Music City.

Country music is in full swing in Nashville at all times of the year, but April to October is the best time to visit Nashville. From late spring through early fall, the weather enables visitors to enjoy the city and all of its attractions. Temperatures begin in the low-70s and peak in the 90s during July before settling back down into the 70s. The weather can change quickly, so be ready for high humidity and summer rain showers. There are fewer crowds and better rates from November through March with the exception of the holidays. While the city does not experience any significant snowfall, temperatures average in the mid-30s to low-40s. A car or a hop-on/hop-off sightseeing tour like Old Town Trolley is the best way to get around Nashville. Although the city has a public transportation system, it is not designed for visiting Music City’s popular attractions. Many of these attractions are spread out over an area that is too large to reach comfortably on foot. Using Old Town Trolley eliminates the need to navigate congested downtown streets and search for an available space in the city’s limited parking.

Nashville is experiencing a culinary renaissance. Many award-winning chefs produce ambitious menus featuring organic and locally sourced ingredients. To save a little money, visit these eateries for lunch rather than dinner. You will get the same high quality for a lower cost.

Country Music Hall of Fame and Museum features ever-changing exhibits that chronicle the important events and legendary performers that made the genre famous.

Ryman Auditorium is a National Historic Landmark that was the host venue for the Grand Ole Opry for 30 years.

Honky Tonk Highway is the area of Lower Broadway that is home to many of the city’s famous clubs, like Tootsie’s Orchid Lounge and Robert’s Western World.

Music City Walk of Fame is a star-studded pathway that honors music legends and other individuals who have made a lasting impact on Nashville.

Musicians Hall of Fame and Museum recognizes musicians of all genres by showcasing their stories, instruments and hit recordings.

There are also museums dedicated to legendary performers like Johnny Cash and Patsy Cline.

If your travel plans permit, try to include one of these live musical events in your itinerary.

Awesome April is a month-long festival featuring a number of concerts and other cultural celebrations. The event includes Tin Pan South, which is billed as the largest songwriters festival in the world.

The Country Music Association Festival is a four-day music festival hosted in June that attracts legendary entertainers who perform one of the many concerts offered during the event.

Country Music Association Awards Ceremony is held in the Bridgestone Arena each November. The awards recognize outstanding achievement and contributions to country music.

Nashville is known as Music City for a reason. From dive bars to concert halls, country music performances fill the air with the unmistakable rhythms. If you are looking for a place to enjoy good music, consider these popular venues.

The small stage inside the Mercy Lounge, a funky watering hole, hosts an eclectic mix of local and nationally known touring acts.

The famous Station Inn is considered by Frommer’s to be one of the best venues for live bluegrass music in the country. Marathon Music Works is a midsize venue that hosts touring bands too popular for smaller clubs that cannot attract enough people to fill large arenas like the Ryman Auditorium.

Best Hidden Gems and Hole in the Walls

To leave the tourists behind and listen to music with the locals, consider visiting one of these eclectic venues.

Alley Taps is a lively haunt featuring a warm vibe that offers a nostalgic alternative to the honky tonks on Lower Broadway.

Cannery Ballroom is a grungy rowdy venue where patrons can discover underground acts playing a wide range of musical genres.

The Basement East is known locally as “the Beast.” This longstanding venue is located in the basement of Grimey’s New and Preloved Music.

Located on Lower Broadway, the Bluegrass Inn offers many different styles of music, including country, hillbilly and rockabilly in an intimate setting.

In the shadow of the more famous Bluebird Café, the Douglas Corner Café is just as revered by locals as a venue for great music. 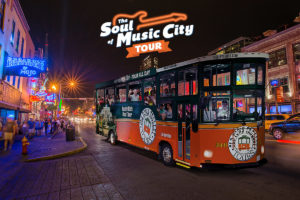 For an interesting and entertaining insight into the history of country music, you can climb aboard the Old Town Trolley’s Soul of Music City Tour. This 2.5-hour tour is led by a talented performing guide. Explore different musical genres as you learn intriguing facts about the people, places and events that built Nashville’s iconic reputation. Along with history and music, you will have fun during this in-depth look at some of the most legendary places in town. 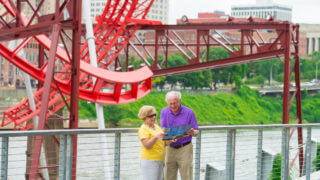 Romantic Things To Do in Nashville The Gallery of Iconic Guitars
Up Up
Back to top