The historic district, the heart of Savannah, is famous for its cobblestone streets, beautiful gardens and magnificent architecture. There are many things to do in and around the area, from viewing historic houses and churches, to experiencing art, culture, gourmet dining and much more. 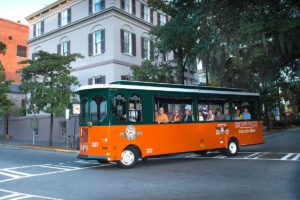 To more than 4 million Girl Scouts across the United States, the Juliette Gordon Low birthplace is a must-see Savannah attraction, affectionately known as the”Girl Scout Mecca”. Juliette, nicknamed Daisy, was the founder of the Girl Scouts and lived out her childhood in the home which is now a National Historic Landmark.

Everyone can enjoy the tours of this exquisite mansion built in the early 1800’s and learn about the history of the Girl Scouts, the life of its founder. and that era in American History. Even children not in the Girl Scouts enjoy this historical home because the guides gear the information toward children’s groups. Guests can view several of Daisy’s paintings and other artwork that are on display in the house. There’s also a gift shop that offers Girl Scout memorabilia as well as other gifts and souvenirs. Located in Savannah’s popular City Market, the American Prohibition Museum is the first and only museum in the United States dedicated to the history of Prohibition. Highlighting an era of gangsters, rum runners, and flappers, the museum brings the Roaring Twenties to life with over 20 intoxicating exhibits and an authentic speakeasy. Featuring 21st century technology and immersive displays, the museum takes guests on a journey through the past to the early 1900s when anti-alcohol rallies swept the nation and America’s struggle with alcohol was brought to light. One of the many lovely squares that are so much a part of Savannah’s history and charm, Chippewa Square, was established in 1815 as a tribute to the Battle of Chippewa in the War of 1812. Its location in the heart of Savannah’s historic district made it a popular social spot then and now. A detailed statue of General James Oglethorpe stands in the center of the square, honoring the man who founded Georgia in 1733. Oglethorpe is known for his benevolence toward others, especially the Yamacraw Indians, who were the first inhabitants of the area.

Tomochichi, the leader of their tribe, and Oglethorpe were fast friends and it is because of that relationship that the early settlers were welcomed by the Indians. Oglethorpe wished to create a utopian society where people of all kinds lived together peacefully, and where neighborhoods centered around public squares. After more than two centuries, his plan and the squares are still intact and a significant part of the Savannah atmosphere and beauty. You will also find the Tomochichi Monument here. 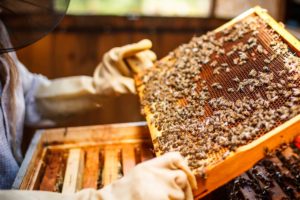 For a sweet departure from your sightseeing, stop into the Savannah Bee Company Flagship store located at 104 West Broughton Street, just a short walk from Chippewa Square. This charming shop is not only a great place to buy a variety of honey and beeswax products, but also to learn about beekeeping and how the honey is made. The best part – a taste of the many different honeys they sell. Take the spoon they give you and get a sample of each one as you browse through the store. There are also beekeeper’s outfits on display and a cool video that showcases bee keeping. Jepson Center for The Arts

Located at 207 York Street, this modern building stands out among the many historic buildings in the area. A part of the Telfair Museums, the Jepson Center for The Arts lures visitors in with an extensive collection of artwork, an interactive children’s museum and a charming café. Enjoy a relaxing lunch as the sunlight fills the room in the center of the museum that overlooks the square. Temporary and permanent exhibits showcase everything from photography to sculpture, making it a great outing for art enthusiasts and adults and children of all ages. There are over 9,000 graves in this historic cemetery that opened in 1750. The final resting place to many of the city’s earliest residents, it is also here that many notable Savannah citizens are buried including Button Gwinnett, who was a signor of the Declaration on Independence. Many people visit Colonial Park to roam through the peaceful pathways that are lined with gravestones that date back to the mid 1700s. Its intriguing history includes a time when it was used as a Union Army campground during the Civil War and the soldiers vandalized several headstones – some of the damage, including bullet holes, can still be seen today. The Colonial Park Cemetery is located at 201 Abercorn Street. This unique shop located at 340 Bull Street features original works of art and crafts from the Savannah College of Art and Design. Pick up a masterpiece created by some of the best and brightest artists who are alumni and students from SCAD. You’ll surely be the owner of a work of art that is a one-of-a-kind. The shop sells everything from photography, paintings, jewelry, sculpture and pottery to handbags, clothing and much more. Just a short walk away from the Juliette Gordon Low Birthplace on State Street, this cool shop features antiques and collectibles from more than 30 local dealers. From vintage clothing, jewelry, purses and furniture to art pieces, LP albums and many other knick-knacks, it’s a great stop on your sightseeing excursions, especially for those who enjoy picking up unique souvenirs and gifts. 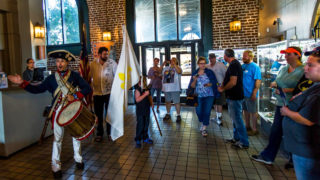 Savannah History Museum
Up Up
Back to top