A city steeped in history, Savannah is home to extraordinary architecture, natural beauty and an abundance of unique attractions. While on vacation, stroll through the charming country squares, marvel at the historic homes and visit the other points of interest. But before you head home, be sure to include these historic Savannah churches on your itinerary.

Located at 222 East Harris Street
The oldest Roman Catholic church in Georgia, the Cathedral of St. John The Baptist is a must-see while in Savannah. Built in the late 1870s, this magnificent house of worship was destroyed by a fire in 1898, but was rebuilt immediately after. A visit here will treat you to breathtakingly beautiful stained glass windows, murals, bronzed columns, towering steeples and graceful arches. Self-guided tours of the Cathedral are available Monday through Saturday, except during Masses or other religious events. Docent-led tours are also available, but must be arranged in advanced by calling the church office at (912) 233-4709. Located at 28 Bull Street
Christ Church was established in 1733, making it the first house of worship in the colony of Georgia and the site of the first Sunday School class in North America. Rector George Whitefield served the church until 1740 and was the founder of the Bethesda Orphan House and Academy, the oldest home and school for boys in the United States. A tour of this neo-classical building will allow you to view the bell in the north tower, which was crafted and hung by Revere and Son of Boston in 1819 and is still used today. The church’s beautiful architecture, stained glass and celling moldings are among the numerous features that delight visitors. Located at 25 West Oglethorpe Avenue
The result of King George II’s desire to have a place of public worship in 1755, the Independent Presbyterian Church was built on the site granted by the King. However, it was completely destroyed by fire in 1889. Two years later, the church was reconstructed as near to the original design as possible and the marble baptismal font, which survived the fire, is still in used in the church today. While visiting this church, which has seen over 250 years of ministry, you’ll have the opportunity to view the magnificent mahogany pulpit, tall federal windows, Corinthian columns and tall steeple, among other impressive features. 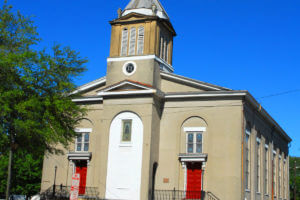 Located at 23 Montgomery Street
This Savannah icon leaves an indelible impression on all who visit. Dating back to 1774, the First African Baptist Church is much more than an active place of worship for many Savannah citizens, it provides a journey through the rich past of the African Americans who lived in Georgia and surrounding areas. During its long history, it served as the largest gathering for blacks and whites to meet during the time of segregation. The pews in the balcony, original to the church, were made by slaves and their markings in an African dialect are still visible. On the ceiling, Nine Patch Quilt design shows that the church once served as a safe house for slaves. Beneath the floor of the lower auditorium exists a subfloor, which was part of the Underground Railroad. Other remarkable features are the light fixtures, baptismal pool and the pipe organ, which are also original to the church. Tours are offered Tuesday through Saturday at 11 a.m. and 2 p.m. and on Sunday at 1 p.m.

Located at 127 Barnard Street
Built and dedicated in 1848, this lovely Savannah church is the oldest Methodist church in the city. Before Trinity, the only Methodist place of worship was Wesley Chapel, established in 1807 by the founder of Methodism, John Wesley. The congregation grew and soon the Trinity and Wesley became one. Today, the Trinity is known for its progressive and inclusive style of worship, welcoming all races, sexual orientations and genders. Located at 1 West Macon Street
This Gothic Revival style church was founded in 1841 and dedicated in 1853. It has served the Savannah community by offering worship services and Christian education programs throughout its history. The Green-Meldrim House was added to the church 1943 and is used as a parish House and Rectory. The most notable features of St. John’s are the chimes that fill the air with melodic tunes and the gorgeous stained glass windows that depict scenes from the New Testament.

Located at 321 Habersham
Known as the “Jingle Bells” Church, the Unitarian Universalist was originally established in 1851. The church’s organist and choir director, James Pierpont, is credited with writing the famous holiday song in 1852. His brother, Reverend John Pierpont Jr., served as the minister during the same time period. Legend has it that the original church was partially dismantled and rolled through the streets of Savannah to its present location after the Civil War. It was renamed St. Stephen Episcopal and was home to the first African Episcopal parish in George for 80 years following. In 1997 the church was returned to the Unitarians and has been their place of worship ever since. Things To Do In Savannah On Vacation