Things To Do In Beacon Hill Boston 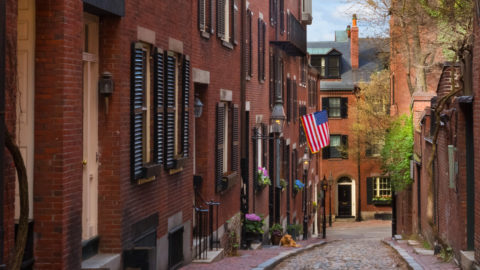 One of Boston’s oldest neighborhoods, Beacon Hill is known for its charming, narrow cobblestone streets, federal style row houses and gaslit streetlamps. It’s also considered to be one of Boston’s most desirable and expensive residential areas in the city. A visit to Boston isn’t complete without a stop here. Whether to shop, dine or wander about admiring the architecture and numerous historic sites, there are so many things to do in Beacon Hill.

The Charles Street Meeting House in Beacon Hill is a historic church that was built in 1807. Its first congregation was the Third Baptist Church, which baptized its members in the Charles River. Before the Civil War, the church was an important site for the anti-slavery movement, used for speeches by Frederick Douglass, William Lloyd Garrison, Harriet Tubman, and Sojourner Truth. The building is currently used for commercial purposes.

Louisburg Square was designed as a model for town house development in the 1840’s but the square was not replicated because of space restrictions. Today, the area is one of the most prestigious addresses in Boston. The homeowners, not the city, own the square and the oval park. Statues of Columbus and Aristides can be seen on the north and south ends, donated by a Greek merchant in 1850. Residents in the square have included author and critic William Dean Howells, the Alcotts, including author Louisa May Alcott, and currently Senator John Kerry. Charles River Esplanade is one of the many examples of land set aside in Boston for public enjoyment. During the summer you can catch a free concert or play at the Hatch shell, or watch the rowers practice in the Charles River as you stroll in the park.

Built in 1805 and renovated in 1830, the Nichols House Museum was constructed by architect Charles Bulfinch. The museum takes its name from Rose Standish Nichols, who lived in the house between 1885 and 1960, and represents the lifestyle of the American upper class during that period. The Nichols House Museum offers a room-by-room tour of the four-story row house, which is decorated in original furnishings.

Sophisticated, comfortable, or intimate, dining in Beacon Hill is a culinary pleasure. Fine coastal or eastern Mediterranean, French, Italian, and contemporary American restaurants are tucked in and along the charming cobblestone & red brick streets. One of the most photographed streets in the city, Acorn offers visitors a reminiscent ride back to colonial Boston. It was on this lovely street that 19th century artisans and trades people lived and today the row houses are considered to be a prestigious address in Beacon Hill. One of the oldest libraries in the United States, the Athenaeum was founded in 1807 and is an exclusive club of sorts in which a membership is required to use the many magnificent resources of this institution. But feel free to visit the first floor of this historic building that is open to the public and is home to an art gallery with a variety of rotating exhibits. Marble busts, porcelain vases, oil paintings, books and more are a delight to browse through and view. There’s also a children’s room with cozy reading nooks that overlook the Granary Burying Ground. Guided tours are offered as well; they have limited space and fill up fast but it is surely worth it; just call a day ahead to get your spot. You’ll be treated to such sights as shelves and shelves of antique books, various artworks and marvelous collections that include most of George Washington’s private library and the King’s Chapel Library which came from England’s William III in 1698. The Boston Athenaeum is located at 10 1/2 Beacon Street. Boston commonThe oldest public park in the country, Boston Common was established in 1634 and is on the List of National Historic Landmarks. Today, this expansive green space is the starting point of the Freedom Trail and the anchor of the Emerald Necklace, a system of connected parks that winds through various Boston neighborhoods. Its long history includes being used as a campgrounds for British Troops, the site of public executions and the place where several notable visionaries and leaders gave legendary speeches including Martin Luther King Jr., Pope John Paul II and Gloria Steinem. Today, Boston Common is still a place for many public gatherings, festivals, events, concerts and sports as well as a pleasant place to jog, bike and walk while enjoying the pretty scenery. Located at the foot of Beacon Hill. Located on Beacon Street, this gold-domed structure is the state capitol building and home to the Commonwealth’s government. The building itself has a rich history including the fact that the original dome was made of wood that leaked and then was covered in copper in 1802 by Paul Revere’s company. This is one of the most photographed attractions in Boston because of the views from Boston Common. The Museum of African American History is New England’s largest museum dedicated to telling the story of organized blacka communities from the Colonial period through the 19th century. A variety of exhibits, programs, events and educational activities are presented that showcase the stories of black families – from how they lived, educated their children, worshiped, worked, created artwork and how they organized politically to advance the cause of freedom. Located within the African Meeting House, which is the oldest African Meeting House in America and inside the Abiel Smith School, which was the first building in the country constructed for the sole purpose of housing a black public school, the buildings themselves are a big part of the rich heritage and incredible past of the African Americans in New England. Located at 14 Beacon Street; open Monday through Saturday from 10am to 4pm.

Old Town Trolley is a convenient way to explore Faneuil Hall while maximizing your vacation time. Stroll through one of Boston’s oldest neighborhoods, enjoying the sights of the Charles River Esplanade, or take photos down Acorn Street. With stops all throughout Boston, you can hop on and off at the sites you want to visit and learn about the rest during our fully narrated 90 minute historic sightseeing tour. Find the lowest price and money-saying packages by purchasing tickets direct through our website.