Housed in a dazzling edifice, the Institute of Contemporary Art (ICA) is a treasured centerpiece in Boston’s flourishing Fort Point Channel neighborhood. Featuring a glass-enclosed gallery space cantilevered over the Boston Harbor, the modern façade of the Institute provides an interesting contrast to the historic architectural designs prominent in the city’s skyline. The arrival of the museum in 2006 helped spur the artistic renaissance of this former warehouse district. The ICA sponsors a variety of dynamic permanent and rotating exhibits in its breathtaking waterfront setting. Founded in 1936 as the Boston Museum of Modern Art, the Institute of Contemporary Art has seen numerous changes over the ensuing decades. It was originally housed in the Busch-Reisinger and Fogg Museums at Harvard University. The name was eventually changed to the Institute of Modern Art in 1939. Adopting its current moniker eight years later, the museum would move to gallery space on Newbury Street, Beacon Street and Soldiers Field Road as well as a former police station on Boylston Street. It opened in its 65,000-square-foot current location in 2006.

The museum has hosted numerous first time exhibitions featuring works by Paul Gauguin, Frank Lloyd Wright and Francesco Clemente. It also was the setting for New England’s first survey of African-American artists. Since occupying its present exhibit and performing arts space, the Institute has embarked on a campaign to create its own permanent collection and to continue hosting a variety of traveling exhibitions. Boasting 15.5-foot-tall ceilings and column-free gallery spaces, the museum showcases a diverse collection of national and international artwork in a variety of media. Highlighting artwork by female artists, the institution organizes thematic exhibitions along with surveys of a wide range of leading and emerging contemporary artists. Past exhibitions have featured Andy Warhol, Douglas Huebler and Robert Mapplethorpe as well as Sophie Calle, Cornelia Parker and Tara Donovan. The visually stunning building enables the institution to meld live performances, film and presentations with art for dramatic results. The ICA also sponsors an eclectic program of contemporary music, dance and films. A 325-seat theater is located on the second floor. The glass walls flanking the water’s edge afford wonderful views of the harbor and city skyline. The museum is open Tuesday through Sunday from 10 a.m. until 5 p.m. It remains open until 9 p.m. on Thursdays and Fridays. While the museum is generally closed on Mondays, it opens on Martin Luther King, Jr., Day, Presidents’ Day, Memorial Day, Labor Day and Columbus Day national holidays offering free admission. The ICA is closed Patriots’ Day, Independence Day and Thanksgiving as well as Christmas and New Year’s Day. Although it charges a nominal fee, the museum offers complimentary admission on Thursdays after 5 p.m. On the last Saturday of each month, except December, two adults will be admitted free if accompanied by children under the age of 12. Discounts are also available to military personnel and their families, teachers and college students. Children younger than 17 are admitted free.

Free guided tours are offered Thursday evenings along with Saturday and Sunday afternoons. The museum is fully accessible and it can provide assisted listening and sign language interpretation if requested in advance. The ICA requires visitors to check all backpacks as well as other large bags. While the museum encourages still photography of the building and the works on display, video recording, tripods and flashes are prohibited. In addition to a museum store, the ICA houses the Water Café, where you can grab a quick bite of seasonal favorites in a casual harbor side atmosphere. Food and drinks are not permitted in the museum. Parents can bring strollers inside the galleries. Changing stations are also available.

How to Get There

Because there is limited paid parking near the museum, you should use alternate transportation when visiting the ICA. The museum is situated on the MBTA Silver Line. The ICA is a short walk from the Courthouse or World Trade Center stops. The most convenient way to reach the museum is to ride the Old Town Trolley, an immensely popular educational and entertaining sightseeing tour. You can hear interesting facts about some of Boston’s most famous people and landmarks. Step off the trolley to enjoy the contemporary works at your leisure. The trolley stop is a short walk away. When you are finished, pick up the tour where you left off; a trolley comes by every few minutes. Go to map. The ICA is conveniently located in one of America’s most walkable cities. This vibrant neighborhood features several cultural and historic attractions.

Part of HarborWalk, a collection of recreational spaces and pathways, Fan Pier Park is a beautifully landscaped green space offering dramatic water views. There are benches and tables for enjoying a leisurely meal or snack as well as a tot lot designed for younger children. You can also run, walk or ride a bike along the scenic trails.

Boston Children’s Museum is the second oldest and one of the most influential institutions of its kind. It features hundreds of interactive exhibits that enable children of all ages to have fun while they learn about the world around them.

The Boston Tea Party Ships & Museum is dedicated to one of the key events leading up to the American Revolution. After touring the museum and seeing one of the original tea chests thrown into the Boston Harbor, climb aboard a replica 18th century cargo ship to engage in your own moment of defiance. 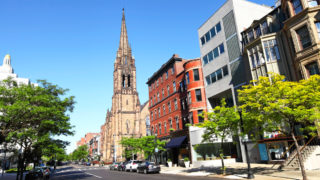 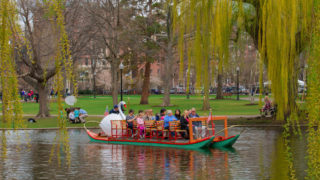 Boston Attractions Romantic Things To Do in Boston on a Date