Located in Northern Tennessee, Music City is a great visitor destination with growing popularity. In addition to honky tonks and music hall of fame museums, there are historical sites, notable architecture and plenty of delicious BBQ. If you’re in the Louisville, KY area, Nashville is the perfect place for a quick escape from your daily routine. Here’s everything you need to know about a day trip to Nashville.

Nashville in a Day

Where to spend the day in Nashville will depend on your specific interests. You can organize day trips from Louisville based around country music, Tennessee history or sports. You should also consider taking a tour that combines all three to experience all that Nashville has to offer. Music lovers should focus their attention on the Lower Broadway section of the city. Known as the Honky Tonk Highway, it is home to famous venues like Tootsie’s Orchid Lounge, Boot Country and Jack’s Bar-B-Que. Other popular attractions nearby include the iconic Ryman Auditorium, Hatch Show Print and the Country Music Hall of Fame and Museum. The oldest working letterpress print shop in the country, Hatch Show Print is renowned for its creative show posters. It is the perfect place to create your own souvenir of the trip. Stroll along the Music City Walk of Fame to see stars honoring legendary performers spanning several genres and generations. If time permits, consider visiting museums dedicated to the careers of Johnny Cash and Patsy Cline. History buffs may want to stay near the State Capitol. One of the nation’s oldest working legislative buildings, the limestone Greek Revival-style edifice features artwork and ornate chandeliers. The grounds display statues and memorials. The Tennessee State Museum has interactive displays that chronicle the history of the Volunteer State from its frontier days through the Age of Jackson, the Civil War and the present day. Located in the shadow of the State Capitol, Bicentennial Mall State Park commemorates 200 years of Tennessee statehood. Outdoor exhibits reflect the history, natural beauty and culture of Eastern, Middle and Western Tennessee. You may also want to include Fort Negley. Located approximately three miles south of downtown, it is the largest inland fort built during the Civil War. When it comes time to grab a bite to eat, stop by Prince’s Hot Chicken, the birthplace of Nashville’s famous spicy signature dish. 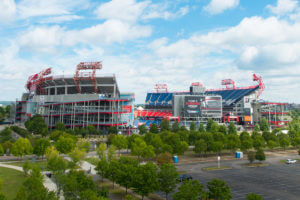 Sports fans can enjoy games at the Bridgestone Arena, Nissan Stadium and First Tennessee Park. These venues host the Nashville Predators of the National Hockey League, the Tennessee Titans of the National Football League and the Nashville Sounds, the Triple-A minor league affiliate of the Oakland Athletics respectively. When the teams are not playing at their properties, the stadiums offer tours of their facilities. The Bridgestone Area is also home to the Tennessee Sports Hall of Fame.

An Old Town Trolley Tour enables you to soak in Nashville’s music and cultural heritage. Lasting approximately one hour and 40 minutes, the tour is led by a knowledgeable conductor who provides an interesting and entertaining narration about the city. The trolley has numerous stops that offer access to 100 popular sights.Step off at any stop to explore a particular point of interest more in-depth at your own pace. When the next trolley comes by in about 20 minutes, climb back on board and resume the story right where you left off. Old Town Trolley helps you make the most of your stay in Nashville.

Popular Stops along the Route from Louisville, KY to Nashville

Passing through the Bluegrass State’s bucolic horse country, Interstate 65 connects Louisville and Nashville. The highway offers access to unique natural wonders and fascinating history that include authentic Southern cuisine and Kentucky bourbon. You can make one or more stops along the way or drive straight through to enjoy more sights in Music City.

The trip will take approximately three hours by car. If your itinerary permits, including a side trip can make day trips from Louisville to Nashville more memorable. There are several popular attractions located near I-65.

The Jim Beam Distillery in Shepherdsville is the location where America’s most recognized bourbon is produced. Tour the Stillhouse to learn about the distilling process, which creates the distinctive flavor.

Swope’s Cars of Yesteryear in Elizabethtown displays automobiles from the early 1900s until the 1960s. Just a little further up the road in Bowling Green, car enthusiasts can also stop at the National Corvette Museum.

Dinosaur World enables you to step back in time by digging for fossils and panning for minerals. Featuring 150 life-size dinosaur models, the park enables guests to envision the era when these fascinating creatures roamed the earth.

Mammoth Cave National Park in Brownville holds the world’s record for the longest known system of interconnected caves. You can explore this impressive natural wonder at your own pace or take a Ranger-led tour.

Hendersonville Memory Garden is the final resting place of the Man in Black. After visiting the gravesite, you can tour the Johnny Cash Museum in Nashville.

As I-65 winds its way south, numerous attractions can make the drive fun and memorable. The trip also highlights the unique ambiance of Music City. Best Neighborhoods For Shopping In Nashville
Up Up
Back to top