“Today’s the day” was Mel Fisher’s mantra. Fortunately, his lifelong hunt for ancient buried treasure was realized before he died so his mantra held true. The day was July 20, 1985, when, after 17 years of searching, Mel Fisher and his crew recovered $450 million worth of buried treasure from ocean floor just offshore from Key West. The Nuestra Senora de Atocha and the Santa Margarita, two Spanish galleon ships that sunk in 1622, carried 40 tons of gold and silver, Pieces of Eight gold coins, Columbian emeralds, over 1,000 bars of silver and other gold artifacts.

The recovery of the ships’ bounty astounded the world, making Fisher an instant celebrity and Key West hero. Today, his spirit lives on at the Mel Fisher Maritime Museum and his generosity allows all of us to share in the glory of that momentous discovery. At this nationally recognized research and archaeology institution, visitors can explore and touch some of the breathtaking artifacts that defined the famed treasure hunter’s life.

From Tragedy to Treasure

On September 4, 1622, 28 galleon ships left Havana en route to Spain. Aboard these ships was the wealth of an empire: silver from Peru and Mexico, gold and emeralds from Colombia, pearls from Venezuela. The very next day, the fleet was overtaken by a hurricane and eight of these ships ended up on the bottom of the ocean floor, their remainders scattered from the Marquesas to the Dry Tortugas along the Florida Straits.

Fast forward about 350 years to 1969 when Mel Fisher with his Treasure Salvors crew begins a relentless hunt for the buried treasures. He was particularly captivated by the Atocha, believed to have had 24 tons of silver bullion, 180,000 pesos of silver coins, 582 copper ingots, 125 gold bars and discs, 350 chests of indigo, 525 bales of tobacco, 20 bronze cannons and 1,200 pounds of worked silverware onboard at the time the ship sank.

Using sand-clearing prop wash deflectors and specially designed proton magnetometers, Fisher and crew followed the trail of the elusive wreck for years searching for clues. With major discoveries spanning from 1973 to 1980, the Treasure Salvors continued their search until Fisher’s son Kane came across the motherlode of the Atocha’s bounty on that fateful day in 1985.

Archeologists and conservators immediately went to work identifying, excavating and preserving the buried treasure, much of which you can see today at the Mel Fisher Maritime Museum.

The 1622 Fleet Exhibit is where you’ll learn the history of and see the buried treasures acquired from the Nuestra Senora de Atocha and the Santa Margarita. Artifacts on display include:

While pirates and treasure are a well-known part of the Caribbean’s lore, an oft-overlooked aspect is the African slave trade. At Mel Fisher’s Maritime Museum, the Henrietta Marie Exhibit tells the story of this English merchant slave ship that sunk off the coast of Key West in 1700 shortly after selling 190 captive Africans in Jamaica. Discovered by Mel Fisher’s dive time in 1972, the exhibit displays artifacts and information about Henrietta Marie, the Transatlantic slave trade and Key West’s African Cemetery.

Other Attractions Associated with Mel Fisher

In addition to the museum and its exhibits, you can also visit Mel Fisher’s Conservation Lab. Here, you’ll get a firsthand look at what it takes to conserve artifacts found through underwater archaeology. The attraction is open from 11:30 a.m. to 2 p.m. Monday to Friday. Admission is $12.50 or $25 in combination with a Mel Fisher Maritime Museum visit. Mel Fisher’s Maritime Museum also operates the Key West Turtle Museum, where you can learn about Key West’s history through the lens of the native sea turtle. Admission is free and it operates during season, November through April.

At the end of your visit to the Mel Fisher Maritime Museum, these attractions are just a short walk away: Witness one of the world’s most majestic settings at Mallory Square. Here’s where everyone comes to see, eat, shop and linger. Buy a locally collected sea sponge, peruse a Wyland original in the gallery and stop in at the famous Hog’s Breath Saloon. Mallory Square is where it’s all at and where it all comes together. It’s also where the evening transforms into the renowned sunset celebration and when street performers, colorful entertainers and mouth-watering foods emerge as the sun begins to descend. Browse through the unique shops, pick up a souvenir at Ron Jon Surf Shop and see the local attractions. Find out what all the excitement is about.

A visit to Key West must include a stop at Mallory Square. Welcome to Key West’s first attraction. Meet stingrays and pet a shark! See them eat and watch in wonder as a variety of sea creatures swim around in their natural environment. Come to the Key West Aquarium for an encounter with some of the world’s most mysterious and beautiful marine animals. Since 1934, the aquarium has been wowing guests with its variety of sea species. Listen and learn as knowledgeable guides explain the underwater world that surrounds the Florida Keys. Enjoy shark and turtle feedings and get a close look at groupers, moray eels, barracudas, tropical fish and much more. Visit the touch tank and meet hermit crabs, conchs, sea cucumbers and horseshoe crabs. It’s a fun and exciting experience for children from 0 to 103. Feel the exhilaration as you climb 65 feet in the air to the top of the observation tower for panoramic views of Key West. Inside the Key West Shipwreck Museum, you’ll have that opportunity and more. Find out how those who made their living off shipwrecks in the 1850’s watched and waited for ships sinking off the coast in Key West. Discover the true dangers of the era of shipwrecking and how it made Key West the wealthiest city per capita in the United States. Through actor presentations, exhibits, laser shows and collections of artifacts and treasures from actual shipwrecks, visitors can venture back for a glimpse into the history of the shipwrecking industry.

It’s an ideal “voyage” for adults and children.

Built in 1890 to serve as the commandant and paymaster’s quarters for the navy, the lovely wooden duplex sat on the waterfront in Key West. President Harry S Truman, in search of a winter home and a place to recuperate and relax, made the Little White House his second home, spending 175 days there. Perhaps one of the most popular destinations on the island of Key West, Duval Street is the main drag of downtown, running north and south from the Gulf of Mexico to the Atlantic Ocean. Although it is not much more than a mile in length – this is where the heartbeat of the city comes to life in a diverse array of restaurants, shops, world famous pubs and attractions. 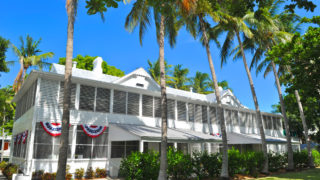 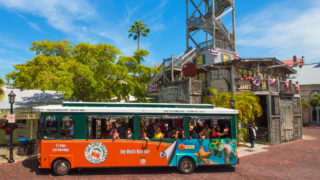 Key West Shipwreck Treasure Museum
Up Up
Back to top