A 1-Day Sprint Through The Spirit Of The South 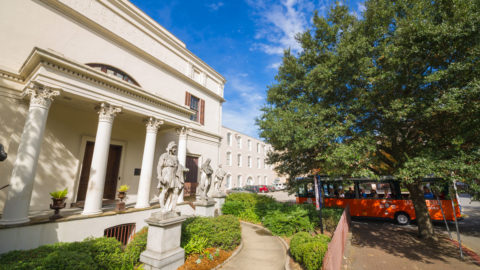 Things to do in Savannah

Trying to absorb the depth and complexity of a magical city like Savannah in a 24-hour period has its challenges but it’s far from impossible and worthy of your time. Established in 1733, the inherent beauty of Georgia’s First City is fascinating and it’s reflected in nearly everything you can explore in this city.

From Forsyth Park’s magnificent and iconic fountain to the city’s rustic, cobblestone streets, Savannah has the charm to be known as one of the most beguiling cities in the United States. For those of you on a time crunch but still want to make the most of this great city and see it like a local, we’ve made some solid recommendations below on how best to maximize your time and make your visit something you’ll cherish forever!

Don’t just experience the surface, live like the locals. Here’s your chance.

Fuel for the 1 Day Visit

The early bird gets the worm. Rest is for the weary. You get the point. Grab some brew at one of Savannah’s can’t-miss coffeehouses. Foxy Loxy Café, Gallery Espresso, The Coffee Fox and The Sentient Bean are all excellent options.

Easily the best way to take in “The Hostess City of the South” like the locals is via an Old Town Trolley sightseeing tour. With 15 stops and more than 100 points of interest, the trolley is an experience not to be missed. It is the perfect way to tour Savannah in 1 day! Service begins at 9 a.m. and includes pick-up and drop-off service every 20 minutes at each stop.

So where should you go? Keep reading for a step-by-step rundown of the top Savannah attractions to hit in one day.

Stroll Through the Park

Enjoy the rest of your coffee and pastry in Forsyth Park, a 30-acre historic city park located in the Victorian District. Home to the Georgia Historical Society, Forsyth Fountain, the Victorian District, and Confederate and Spanish-American War Memorials, Forsyth Park is the perfect way to reflect on the colorful history of the South’s past and the fun-filled day you have ahead of you.

Take in a History Lesson

Continue on your endeavor towards cultural enlightenment with a stop at the Massie Heritage Museum, Mercer House and Wesley Monumental United Methodist Church. Just a few trolley stops from your initial decent, Massie Heritage Museum features kid-friendly exhibits highlighting Savannah’s architecture, public education system and culture as well as the only exhibit considering our significant Native American Heritage in the city. In addition, be sure you don’t miss the one and only American Prohibition Museum where you can learn all about the famous era in a fun, interactive way!

Located in Savannah’s popular City Market, the American Prohibition Museum is the first and only museum in the United States dedicated to the history of Prohibition. Highlighting an era of gangsters, rum runners, and flappers, the museum brings the roaring twenties to life with over 20 intoxicating exhibits and an authentic speakeasy. Featuring 21st-century technology and immersive displays, the museum takes guests on a journey through the past to the early 1900s when anti-alcohol rallies swept the nation and America’s struggle with alcohol was brought to light.

It’s no doubt nearing lunchtime and the crew is getting restless for some proper Southern fare. Head over to Broughton Street, a quaint section of town chock-full of boutiques and restaurants. Venture just off of Broughton Street to find many more places to shop and dine, including Paula Deen’s World Famous “The Lady and Sons” and the Goose Feathers Café.

Now that everyone has food in their bellies, it’s time to hop back on the trolley for a little exploration. A few blocks from City Market is Ellis Square, located on Barnard between Bryan and Congress Streets. Ellis Square was named after Henry Ellis, second Royal Governor of the Georgia colony. Once known as Marketplace Square, this unique section of Savannah boasts hours of consideration including, within walking distance, Telfair Museum of Art, First African Baptist Church and Ships of the Sea Museum.

Unwind from the Day

After hours of exploring, it’s time to sit down and recharge. Backtrack a bit to City Market, one of the stops on the trolley tour. Since the early 1700s, City Market has been the commercial and social center of historic Savannah. It’s also a great place to end the day with a glass of wine, craft beer or farm-to-bottle cocktail. Check out great restaurants like Belford’s, a seafood and steak institution, and Vinnie Van Go-Go’s featuring hearty crust pizza called “Neapolitan.” No 1 day trip is complete without a visit to the American Prohibition Museum, decompress from all the fun you’ve been having with a citrusy Old Fashioned or any of the Prohibition-era cocktails whipped up by the mixologists over at the neighboring 1920s-style speakeasy, Congress Street Up !

80,000 square feet of empty abandoned warehouse space was transformed into a colorful array of shops, restaurants and art galleries. Today, more than 70 businesses, shops, and restaurants call River Street home. Casual and upscale restaurants sit alongside quaint specialty shops and art galleries. You can also stroll along the lovely landscaped river walk that runs between River Street and the Savannah River, where you’ll find Savannah’s Waving Girl and the Olympic Cauldron Monument. Then explore the bluffs along the river on the old passageway of alleys, cobblestone walkways, and bridges known as Factors Walk. Widely considered by ghost hunters and paranormal investigators as America’s Most Haunted City and seen on The Today Show and the Travel Channel, Savannah’s dark past is unveiled on this spooky tour! Learn about the city’s origins with its founding in 1733 when it was built upon Native American burial grounds. Will you encounter the ghost of Civil War General Robert E. Lee at the famous Andrew Low House? Take the Trolley of the Doomed past the burial grounds in Wright Square and try to contact the spirits at the Perkins & Sons Ship Chandlery! 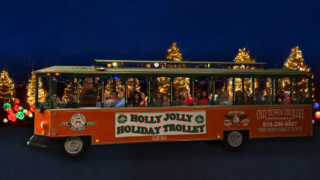 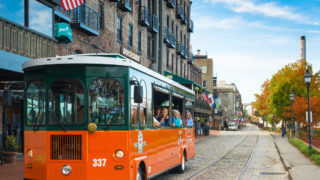 Hop On Hop Off Savannah
Up Up
Back to top