One of the most celebrated and spectacular sights on the National Mall, the Washington Monument, stands as a grand tribute to our nation’s first President, George Washington. The 555 foot obelisk is also one of the oldest and most recognizable memorials in the City. While construction began in 1848, the monument was not completed until 1884 because of financial difficulties during the Civil War.

Visitors from around the world are treated to breathtaking views from the top of the monument where the Lincoln and Jefferson Memorials, the Capitol and the White House can be seen. Inside, 192 memorial stones that were donated from various states, cities and historical societies are seen on the walls.

At the bottom of the monument, fifty American flags fly in honor of George Washington, symbolizing the current fifty states and the nation he founded.

Admission to the Monument

Today, visitors to Washington DC can tour the monument and visit it day or night, including climbing to the top of the obelisk. Although it is free and open to the public, guests need to get tickets in order to tour the monument. Tickets can be reserved in advance of you can go to the Washington Monument Lodge on 15th Street adjacent to the Monument to pick them up. You’ll be given a specific time for your tour.

Tours of the Washington Monument begin as guests enter the elevator and ascend to the 500-foot level where incredible views of the city can be enjoyed. There are a variety of exhibits on the 500 and 490 foot levels, including historic photographs and interesting facts about the monument, the city of Washington DC and George Washington.

Fun Facts About the Washington Monument

Things to Do Close By

Located on the National Mall, the Washington Monument is surrounded by many interesting sights and attractions.

A unique and moving experience, the US Holocaust Memorial Museum contains a variety of exhibits that are designed to demonstrate the horrors that surrounded the Holocaust. The permanent exhibition contains 900 artifacts, 70 video monitors and four theaters showing footage and interviews with eyewitnesses. As part of the experience, each visitor is given an identification card with the story of a survivor and is lead through a chronological timeline of the historical event. Because of the intensity of the exhibition, the museum is not recommended for children under 11. Located on the western end of the National Mall just a short distance from the Washington Monument, the Lincoln Memorial is a tribute to Abraham Lincoln, the 16th president of the United States. It was dedicated on May 30, 1922 and the focal point, a statue of Lincoln seated, is 19 feet tall and carved out of 28 blocks of white Georgia marble. On the walls of the memorial visitors can read several inscriptions, including Lincoln’s second Inaugural address.

Between the Lincoln Memorial and the Washington Monument, the Reflecting Pool is a sight not to miss, especially if you are visiting in the evening when the monuments are lit up. An iconic site, the pool is visited by more than 24 million people each year and creates a dramatic image of the Washington Monument and the Lincoln Memorial, depending on your vantage point. 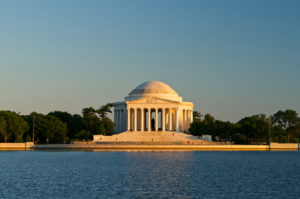 A beautiful neo-classical building located on the Tidal Basin, the Jefferson Memorial was completed in 1943. In 1947, the statue of Thomas Jefferson was added to enhance the tribute to the third president of the United States. Distinguished by its circular marble steps, portico, columns and dome, the building is one of the most visited memorials in Washington DC. Inside on the interior wall, experts from the Declaration of Independence are inscribed.

Located on the National Mall between the Lincoln Memorial and the Washington Monument, this unique memorial was dedicated in 2004 to honor those Americans who made the ultimate sacrifice during WWII to defend the freedom of our country. A total of 59 granite pillars are arranged in a semi-circle around a plaza. On the walls are scenes depicting the war. Take a historical journey with the service men in the scenes as they began their experience in the war. Also significant is the Freedom Wall and its 4,048 gold stars, each representing 100 Americans who died in the war. Getting Around Washington DC

Monuments By Moonlight
Up Up
Back to top