Guide To Visiting The National Mall

Unmoved for over two centuries and spanning some 1,000 acres that stretch from the base of the U.S. Capitol building to the banks of the Potomac River, is the great National Mall. This sprawling mass of manicured lawn is a symbol of the strength and values of the American people not only because it is home to some of DC’s most iconic monuments but because of the massive public events that have taken place here over the past 200 years. Presidential inaugurations, mass demonstrations, concerts, public addresses, parades and many more milestone events have taken place on this esteemed piece of real estate. In short, a visit to Washington DC is synonymous with a visit to the National Mall.

Here’s a list of monuments, museums and other sites found along the National Mall for you to visit while on your trip to Washington DC.

Our friend @amandapleaze13 hopped aboard our trolley for a tour of the city and experienced this stunning view from the steps of the Lincoln Memorial. 🏛

At 555’ tall, this is the single tallest structure in the city. In fact, no building within the city limits is permitted to exceed the height of this giant obelisk, a towering symbol of George Washington, the first President of the United States and its most celebrated revolutionary general. Made of marble, granite and sandstone, the monument is surrounded by 50 American flags representing each of the states. It has sweeping views of DC and an elevator to the structure’s apex, or pyramidion, allowing you to see as far as 30 miles! Or, you can climb 897 steps. We highly recommend the former.

Another gorgeous day at the Capitol. 🇺🇸

The place that was nearly burned to a crisp by hostile British forces during the War of 1812 and where legislators hash it out and sign bills into law today, the U.S. Capitol was built as a result of a design contest. After winning a cool $500 bucks, architect William Thornton went on to design arguably the most recognizable building in all of DC. (Minus the big dome, which wasn’t built until the 1850s.) Because of increased security, freely roaming the Capitol Building is a no-no, so you’ll have to arrange for a guided tour. Contact the Capitol Visitor Center for more information and for passes to see the wheels of democracy churn with a sit-in on the daily business conducted in the Senate and House galleries.

This federal institution has multiple museums scattered throughout Washington, DC., 10 of which are located on the National Mall. With 17 museums, several galleries and a zoo, 2-3 days still might not be enough to see it all at a reasonable pace, so be selective. With so many amazing things to see, that’s easier said than done. If machines with wings that go really fast pique your imagination, then head over to the National Air & Space Museum for a chronicle of the history of aviation and space travel. For you art buffs, trace the evolution of American art from the Colonial days to the present with the grandiose retrospective found at the Smithsonian American Art Museum & Renwick Gallery. All of these museums contain national treasures that tell the story of a people and a nation since its inception.

Centuries ago, George Washington had a vision for the capital city of the United States that included a botanic garden that would demonstrate and promote the importance of plants to the young nation. Established by the U.S. Congress in 1820, the U.S. Botanic Garden is one of the oldest botanic gardens in North America that is a living plant museum informing visitors about the importance of plants and their cultivation to the continued well-being of humans coexisting in a fragile ecosystem. This indoor-outdoor research facility has myriad examples of plants and flowers from every conceivable climate and part of the world. From roses to orchids, the rainforest to the Mid-Atlantic, rare and endangered plants to the latest in home gardens, there’s always something beautiful in bloom to admire.

MORE ABOUT ATTRACTIONS ON THE MALL 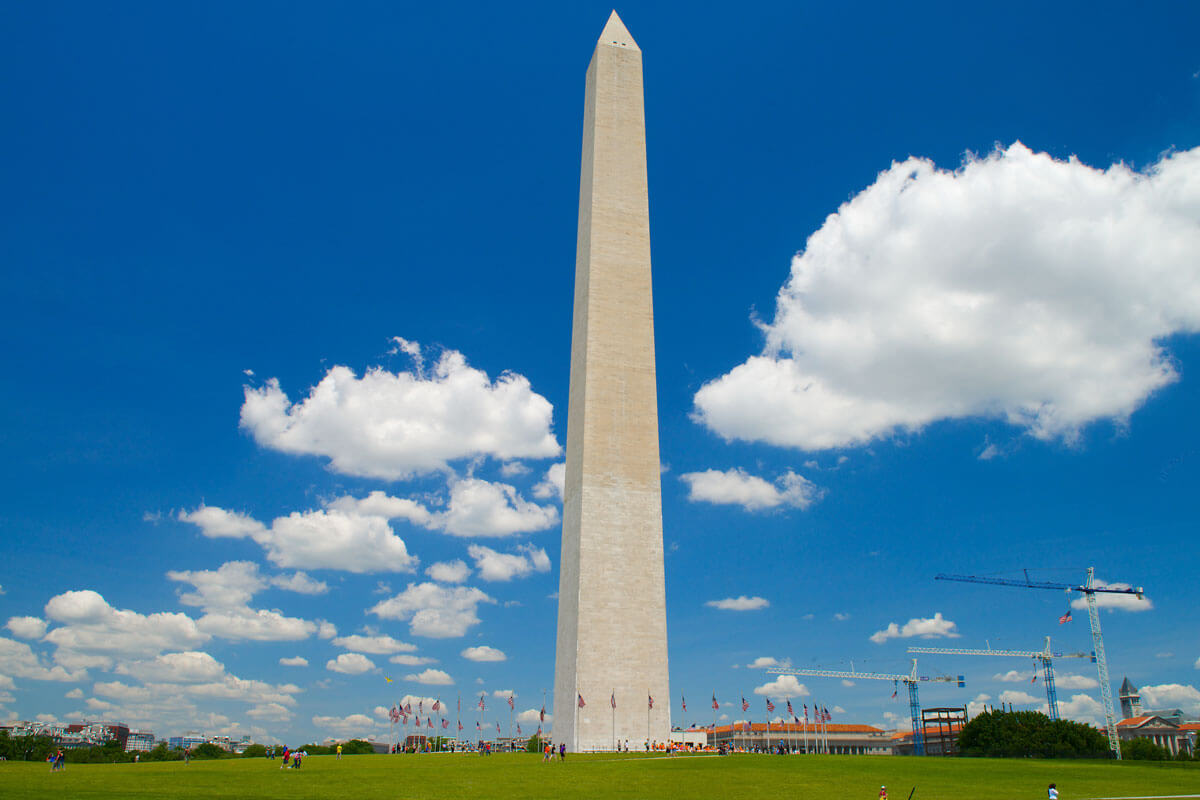 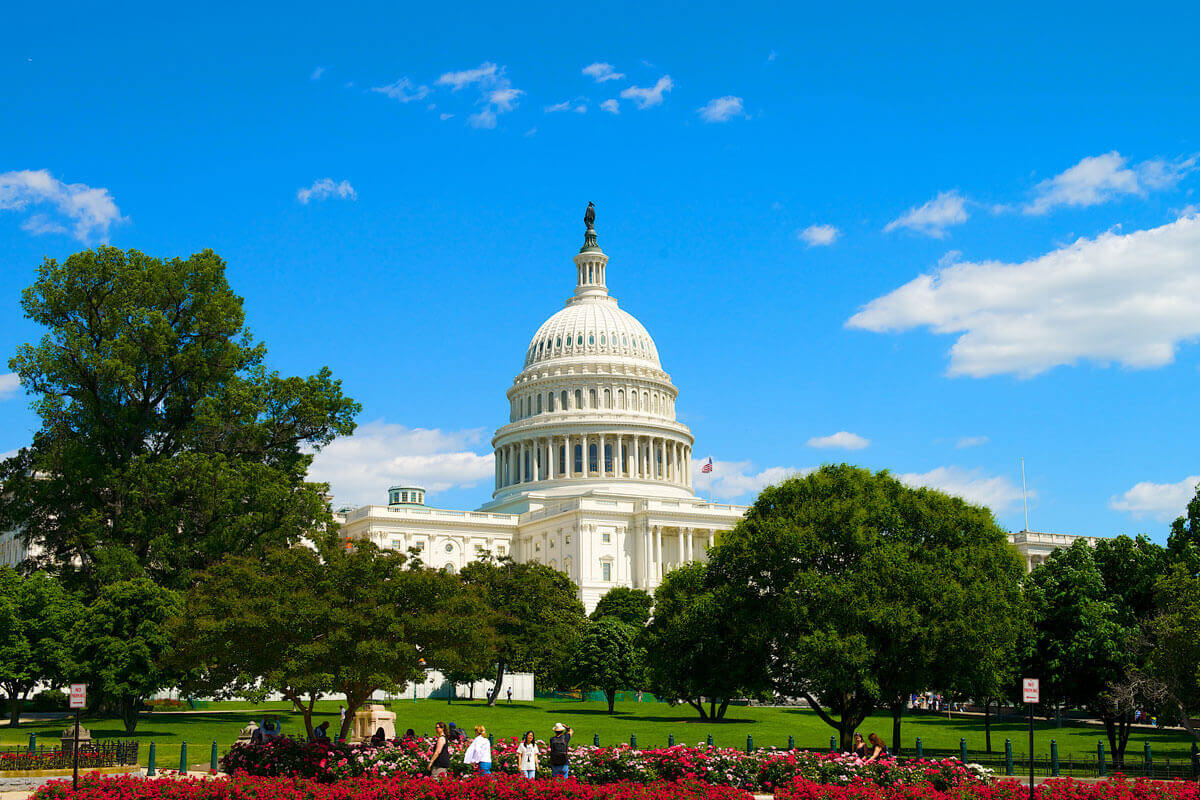 With 30 years in the biz, Old Town Trolley’s ubiquitous green and orange, state-of-the-art vehicles provide the best vantage point to catch a great many of the important monuments and landmarks in and around the National Mall. Covering over 100 points of interest, this hop-on hop-off, fully-narrated tour will take you places like the Jefferson Memorial, the FDR Memorial, the Lincoln Memorial and, as the only tour operator authorized to do so, to the hallowed grounds of Arlington National Cemetery. Furthermore, since the DC area can be rather congested with traffic, parking can become a troublesome issue when you to want to tackle the mall on your own. With this tour, not only will you see the most iconic landmarks but you won’t have to worry about parking your car. 1
Riding around the Beltway for over 30 years as DC’s longest-running city tour!
Most Experienced 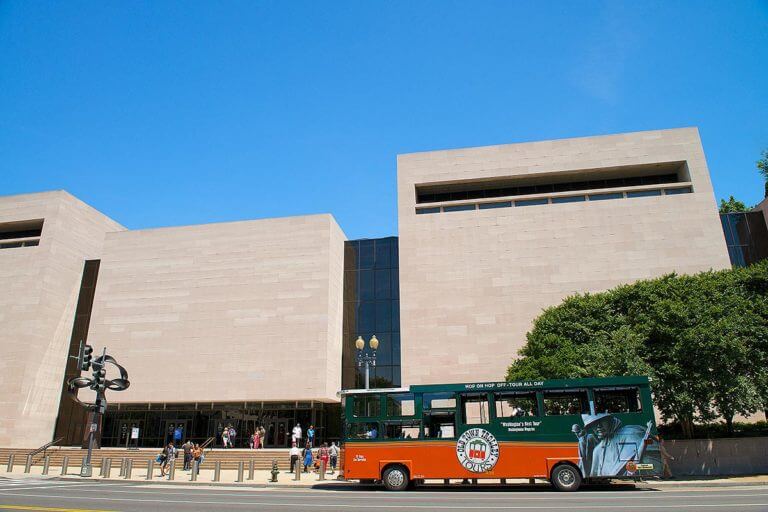 3
The finest, most highly-trained and knowledgeable guides
Our Conductors 5
Proudly owned and operated in the United States
American Owned 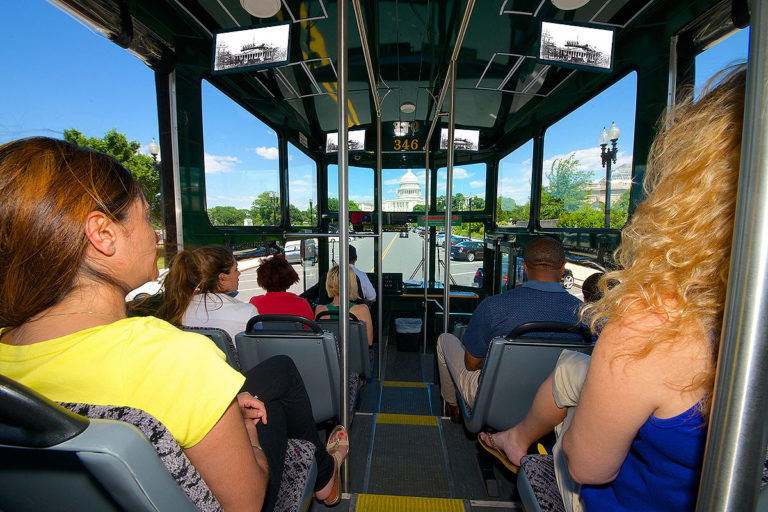 Old Town Trolley Tours is pleased to take you past the National Mall as part of our tour!

Tour length is 90 minutes and includes a stop a stop at the Lincoln Memorial.

*Tour length times may vary depending upon road conditions or traffic.

Reservations for accessible trolley must be arranged 24 hours in advance. Go to accessibility services for more information.

Over this weather?!? Us too! But it’s nothing a little barbecue can’t fix! #hillcountrybbq

Spending the day walking any mall is sure to bring about a grumbling stomach; but when it happens to be America’s Front Yard, you can be sure that a respite at one of the area’s tasty eating establishments is definitely in order.

This notch-above-your-average burger joint has been satiating the appetites of burger lovers for years now and there happens to be one right nearby. It’s easy on the wallet. Don’t forget a side of the crinkle fries.

When you love a great bowl of ramen and you absolutely must have one now, head to this noodle shop in Chinatown for a deeply satisfying bowl of the good stuff.

The best darn smoked meats outside of Central Texas. This place is modeled after one of the meccas of Texas-style BBQ so the brisket is out of this world; but be sure to try some of their homegrown, out-of-the-box offerings as well.

For a taste of old Washington DC, pay this mahogany wood-accented eating house a visit. Enjoy classic, well-prepared American fare with half off oysters during happy hour.

In the District to see the cherry blossoms? Stop by #CityCenterDC to see how we’re in bloom. 🌸 We invite you to take photos of our spring installation by using the hashtag #CCDCinBloom. #SpringInstallation #PalmerAlley #CherryBlossoms #MyDCCool #DowntownDC #IGDC #VisitWashingtonDC (📷 credit: @leadinglatte)

When we go on vacation, we buy things. Whether it’s because there’s an item you can only find at a certain place or whether you want a keepsake of your trip, we love to shop in new and different places. When you’re ready to put that credit card through its paces and grab some new merch, here are the best places to do it around the National Mall.

For things unapologetically patriotic, this store is the whole red, white and blue! T-shirts, jerseys, hats, commemorative coins, novelties and more can all be found right here and, with a purchase of over $50, you get a free picture posing in a replica of the oval office!

This mammoth, mixed-use complex is your go-to for luxury shopping, dining and condo living if you’ve got the means and, in the Fall of 2019, they’ll be opening up a modern, grand hotel.

MAJOR EVENTS THROUGHOUT THE YEAR

Here are the annual events that get folks flocking to the Nation’s Capital:

This event usually runs from late March to mid-April. The parade route runs 10 blocks along Constitution Avenue showcasing bands, floats, dancers, singers and celebrities, many decked out in pink, the theme color in honor of the National Cherry Blossom Festival.

This festival in September is a high-energy block party with live bands and beer tents; but it’s best known for the dozens of ethnic eateries that participate in this friendly gathering. Neighborhood artists sell their DC-centric merchandise as well.

The tree lighting is hosted by the National Park Service in President’s Park on the grounds of the White House. The switch is flipped for the first time in early December, followed by an opening concert. The tree is lit each night after that, with performances each evening.