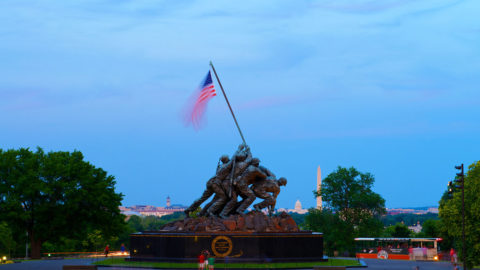 Everyone knows that Washington DC is our nation’s capital and that it’s where you can visit some of the world’s most famous monuments and memorials. But there are a few little known facts about DC that many people would be surprised by. Read on to learn more.

It’s true; both Herbert Hoover and John Quincy Adams had pet alligators in the White House.

To date, nobody has beat his record of watching 480 movies in the White House movie theater.

It’s a fact that these folks drink more wine per capita than any other US state.

This iconic building has many gargoyles and one of them is the sculpted head of Darth Vader. Bring binoculars and check him out on the northwest tower.

Washington DC uses letters for streets traveling east to west. But numbers are also used for streets. Streets traveling north and south are numbered. The “I” and “J” were very similar in older English. Quite often they were interchangeable. Thomas Jefferson would often use the initials T.I. Oddly enough, this is also why there was no J company during WWII.  So there is no J Street because it looks like an I.

There are marble bathtubs in the Capitol Building.

They were installed in 1859 to keep the senators from stinking; during that time, they lived in boarding houses that had no running water.

There are elevators in the Capitol Building that are off limits.

This is because they are reserved for senators.

There are underground tunnels beneath the Capitol.

Miles and miles of tunnels are for senators and members of the House only and are never seen by the public.

There’s a crypt under the Capitol Building that was made for George Washington.

Although he was not buried there, the crypt still exists; they also had a viewing chamber built so people could go by and see him.

DC’s Metro is the second busiest subway system in the U.S.

Beat out only by New York City, which has an average weekday ridership of over 9 million people.

The Washington Football Team was not originally from Washington.

The team was actually first based in Boston.

There’s a museum dedicated to bonsais.

Among the 19 Smithsonian Museums and the many others in the city, the National Bonsai and Penjing Museum holds its own, featuring 200 bonsai trees.

One of the Unknown Soldiers has been identified.

In 1998, a soldier buried in the Tomb of the Unknown Soldier was identified.

One of the world’s only museums of its kind, the International Spy Museum continues to intrigue guests in Washington DC.

All roads in the city lead to the Capitol Building.

It’s the dividing center for all the quadrants of the city, so all roads actually do lead there.

There’s a ghost cat in the Capitol.

In the Supreme Court chamber inside the Capitol, there are cat paw prints just outside the door. The floor was set before it arrived at the U.S. Capitol, so no one knows where they really came from, but legend tells of a ghost cat lingering.

There’s a nuclear fallout shelter under the Washington crypt in the Capitol.

There are many more around the city and across the United States as well.

Only about 2 inches more on average, yet still surprising.

John Adams was actually the first president to live in the White House.

George Washington never lived there; it was built after he died.

There are 35 bathrooms in the White House.

Who knew? There are also 132 rooms and 6 levels in the residence. Even more staggering are the 412 doors, 147 windows, 28 fireplaces, 8 staircases and 3 elevators.

There’s only one US president buried in Washington DC.

Woodrow Wilson is entombed at the Washington National Cathedral.

The Library of Congress is the largest library in the world.

There are more than 160,000 objects in its collection, including 6,000 books originally owned by Thomas Jefferson.

There was a typo in the original etching of the Lincoln Memorial.

It’s been touched up since, but the letter E was accidentally chiseled into the beginning of the word Future on the north wall of the memorial.

The oldest fish market in the United States is in DC.

The Maine Avenue Fish Market opened its doors in 1805 and has been operating ever since.

Not every president has lived in the White House

All except one, George Washington, have lived and worked in the iconic building.

While most buildings in the city have changed throughout history, the Old Stone House dates back to 1765 and has remained unchanged since.

You can see the world’s largest obelisk when you visit

The Washington Monument, rising to 555 feet, 5 1/8 inches, is the also the world’s tallest obelisk.

The city is named after Christopher Columbus

DC stands for District of Columbia and it was deemed so to honor the famed explorer.

The White House hasn’t always been called that

Until 1901, when President Theodore Roosevelt made it official after it appeared in a newspaper article, the White House was called the President’s Palace or the President’s House.

A very international city, DC is home to more than 170 embassies and international cultural centers. More than 15% of the residents in the city speak a language other than English in their home.

The Lincoln Memorial is famous for more than honoring Honest Abe

The memorial was created just two years after Abe Lincoln was assassinated and was constructed in 1914. It was also where Martin Luther King, Jr. made his famous “I have a Dream” speech in 1963.