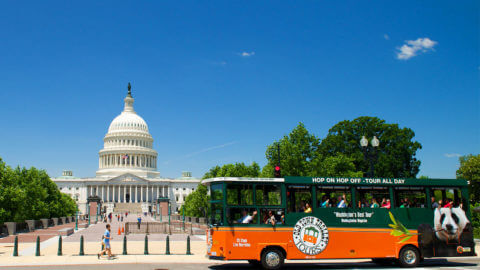 How to See Washington DC in 1 Day

Our nation’s capital plays host to millions of visitors each year, offering a plethora of historical sites, memorials, museums and interesting attractions. If you’re heading to DC and only have one day to explore, you’ll no doubt want to plan your trip well so you can see as much as possible.

In recent years, the arrival of new diners, bakeries and coffee shops to the Metro DC area has converted the District from a big-time brunch town to one that leans more in the breakfast direction as well. Here are a few choice spots you should visit to get your morning started right on your one day in the Nation’s capital.

MUST-SEE STOPS ON THE NATIONAL MALL 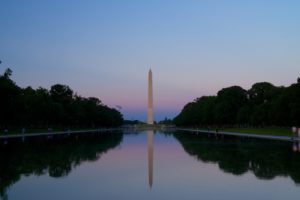 Unmoved for over two centuries and spanning some 1,000 acres that stretch from the base of the U.S. Capitol building to the banks of the Potomac River, is the great National Mall. This sprawling mass of manicured lawn is a symbol of the strength and values of the American people not only because it is home to some of DC’s most iconic monuments but because of the massive public events that have taken place here over the past 200 years. Presidential inaugurations, mass demonstrations, concerts, public addresses, parades and many more milestone events have taken place on this esteemed piece of real estate. In short, a visit to Washington DC is synonymous with a visit to the National Mall, whether you’re here on a one-day stop or over a long weekend. Here are some of the must-visit places that are certainly worth a tour:

The place that was nearly burned to a crisp by hostile British forces during the War of 1812 and where legislators hash it out to sign bills into law today, the U.S. Capitol was built as a result of a design contest. After winning a cool $500 bucks, architect William Thornton went on to design arguably the most recognizable building in all of DC (minus the big dome, which wasn’t built until the 1850s.) Because of increased security, freely roaming the Capitol Building during your one day visit is a no-no so you’ll have to arrange for a guided tour. Contact the Capitol Visitor Center for more information and for passes to see the wheels of democracy churn with a sit-in on the daily business conducted in the Senate and House galleries.

The Capitol shines at night! Have you taken our Monuments by Moonlight Tour yet? #OldTownTrolley #MonumentsByMoonlight 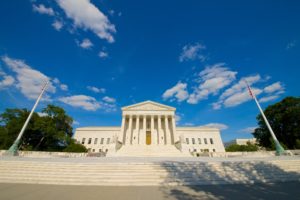 During your one day DC adventure, arrange a tour of the Great Hall. It features busts of former chief justices and friezes depicting heraldic devices and profiles of famous lawmakers. Visitors are also encouraged to explore the grounds and public spaces. The main plaza includes fountains, flagpoles and benches as well as the famous marble candelabra depicting “Justice” holding a sword and scales. 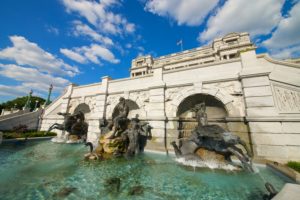 Featured in scenes of the film “National Treasure: Book of Secrets,” the Library of Congress is the oldest cultural institution in America. You can take a one-hour docent-led guided tour of the Thomas Jefferson Building on your one day visit to learn about the building’s art and architecture. The narration also includes information about the Library’s history and vast collection. One of the many advantages of living in a democracy is that you get to see first hand where the Commander In Chief of the most powerful nation on earth lives. In the case of the United States, that place is the one-and-only White House. As one would expect, there is a fair amount of planning required before you can take your self-guided tour through the eight rooms available for public inspection. Due to high security, one must write to his or her congressperson with a request to participate in the tour. It is recommended that you submit your request between three weeks to six months prior to your one day visit. Though there is more work to do here than in any other tour of the city, it is well worth it. Plus, if you’ve got a question or presidential trivia that needs answering, approach any of the Secret Service agents in the vicinity and they’ll be glad to offer up an answer!

In DC, power lunches are not strictly reserved for members of congress or lobbyists on K Street. When noon rolls around and you’ve got a craving for an amazing lunch, make the most of your one day visit and check out some of these eateries.

At 555’ tall, the Washington Monument is the single tallest structure in the city. In fact, no building within the city limits is permitted to exceed the height of this giant obelisk, a towering symbol of George Washington, the first President of the United States, and its most celebrated revolutionary general. Made of marble, granite and sandstone, the monument is surrounded by 50 American flags representing each of the states. It has sweeping views of DC, and an elevator to the structures apex, or pyramidion, allows you to see for as far as 30 miles! Or, you can climb 897 steps. We highly recommend the former.

It’s officially #cherryblossom season!🌸🌸Want info on the best places to see them? Click the link in our bio for more! ➡️ ••• 📸: @brentbrooks 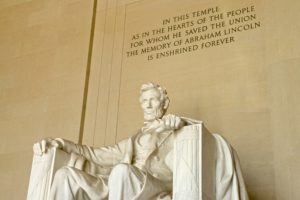 The power brokers and politicians in DC have a hard time agreeing on anything; but the one thing they do agree on is the greatness of our 16th President, Abraham Lincoln. As such, the Lincoln Memorial occupies a place of respect overlooking the National Mall. Combining style cues derived from Roman and Greek traditions, this spectacular monument is visited by millions every year. 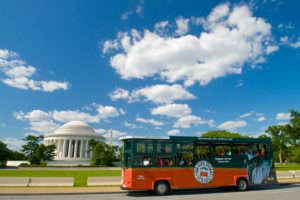 Tours in Washington DC are not complete without a stop at the Jefferson Memorial. A tribute to the third President of the United States, Thomas Jefferson, the memorial is a recognized symbol of democracy and independence. As one of the founding fathers of our country and the author of the Declaration of Independence, Jefferson’s significant impact on the shaping of our government is known throughout the world. Inside the memorial sits a 19-foot statue of Jefferson and passages from the Declaration of Independence are inscribed on the walls surrounding him. The beautiful white domed building is completely open to the elements and is situated on the Tidal Basin framed by Cherry Blossom trees. With its messages of hope and freedom, splendid views and history, The Jefferson Memorial is truly a must-see! 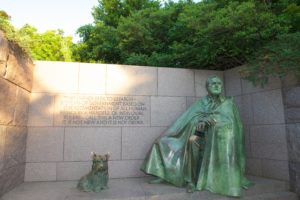 The FDR Memorial is located along the Western edge of the Tidal Basin, between the Lincoln and Jefferson Memorials. Built in 1997, the memorial is known for its unique design and tribute to our 32nd President, Franklin Delano Roosevelt. Four outdoor rooms portray the President’s terms in office, each with different statues and quotes. Beginning with a likeness of him riding in a car during his first inaugural speech and ending with him seated in a wheelchair, the memorial traces his twelve years of office as well as the many changes our country went through during that era. Visitors from around the world enjoy walking through the beautiful, seven-and-a-half acre grounds. Unveiled in August of 2011, the Martin Luther King Jr. Memorial is located on four acres in the West Potomac Park and is part of the National Park Service. Its official address, 1964 Independence Avenue, is in reference to the year the Civil Rights Act became law. The centerpiece of the memorial is the Stone of Hope, a 30′ tall relief of Dr. King that visitors reach after walking past two large pieces of granite called the Mountains of Despair. All of these pieces are in reference to Dr. King’s “I Have A Dream” speech where he said, “Out of a mountain of despair, a stone of hope.” The Inscription Wall contains passages from 14 of Dr. King’s sermons, speeches and writings.

IF YOU HAVE ADDITIONAL TIME

Discover why Monuments by Moonlight is rated one of DC’s Top 20 Best Kept Secrets. All the cherished monuments you’ve only heard about or learned about in books or movies exude a life of their own on this night tour. The glowing dome and grand columns of the Capitol Building, the thought-provoking Lincoln Memorial and so much more await you on this enchanted excursion through past and present. Millions of people visit each year to get an intimate look at some of the world’s most intriguing, beguiling specimens on display here. As part of the Smithsonian Institution, the museum offers an astounding view of the natural world, from rare gems, minerals and animals to insects, plants, and other fascinating items. From interactive exhibits to tours, educational programs and fascinating demonstrations, the museum continues to be one of the most fun experiences in the National Mall.

The hallowed grounds of this place continue to resonate with a special power that attracts over three million visitors a year. There are over 400,000 buried here to date with some 25-30 funerals taking place every day. A ride with Arlington National Cemetery Tours is essential to capture the full breadth of this place. As the official and only tour operator authorized to give guided tours of the cemetery grounds, your tour runs on a continuous loop for up to an hour and makes between 7 and 10 stops, depending on the day of the week you visit. If you ride with Old Town Trolley Tours, you can purchase a special package that includes a visit here as well. Highlights include the gravesite of President John F. Kennedy, General John J. Pershing, The Tomb of the Unknown Soldier and the Arlington House.

Remembering the fallen with this powerful view of Arlington National Cemetery.

As a valued member of the DC community for over 30 years , Old Town Trolley Tours knows the District inside and out. With over 100 points of interest on the itinerary, we’ll take you to the very best of DC from revered monuments to world-class museums. And the best part is you’ll be able to see it at your own pace. Check out this video and see why our Hop-On, Hop-Off tours are considered among the best in the world!

The rich history and culture of Washington DC are what keep visitors coming back year after year. With so much to do and see, it’s important to plan accordingly before starting your DC adventure. Use this guide to help you get the most out of your single day in Washington DC and take in all the incredibly inspirational landmarks across the city. Arlington National Cemetery Tours – General Admission
Up Up
Back to top