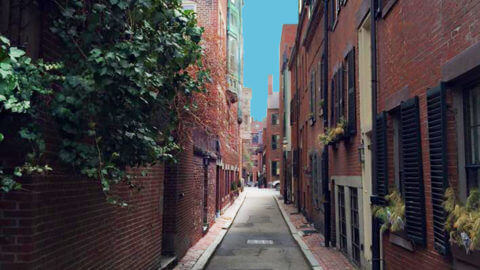 The Black Heritage Trail features various homes, memorials, and sites that are significant in the history of Boston’s 19th century African American community. The first slaves arrived in 1638 and by 1705 there were over 400. At this time there were also the beginnings of a free black community in the North End, and by 1790, the time of the first census, Massachusetts reported no slaves. The trail includes the Robert Gould Shaw & the 54th Regiment Memorial, first black regiment, the George Middleton House, the oldest home built by African Americans on Beacon Hill, and the Phillips School, one of Boston’s first schools with an interracial student body.

Over time, a large community of free blacks and former slaves lived on the north side of Beacon Hill. The general boundaries of the neighborhood were Cambridge, Charles, Joy and Pinckney streets. The residents opened businesses, created organizations, established schools and attended church. During the 19th and 20th centuries, the city’s African-American community was at the vanguard in the quest to abolish slavery and achieve equal rights. They also operated way stations along the Underground Railroad. The Black Heritage Trail is a walking tour that connects more than a dozen pre-Civil War buildings and historic sites chronicling this cultural history of African-Americans. These include:

Designed by Augustus Saint-Gaudens, the monument depicts Colonel Shaw leading the 54th Regiment of Volunteers down Beacon Street as they marched off to war. The regiment was the first all-black unit recruited in the North. Their story is chronicled in the movie “Glory.” The high-relief bronze memorial was dedicated in 1897.

The oldest extant home constructed by an African-American on Beacon Hill, it was the residence of George Middleton, a noted veteran of the Revolutionary War. He led an all-black unit called the “Bucks of America.” His service was recognized by Governor John Hancock. The wood-frame, two-family home dates from 1797.

Built in 1824, the school was originally all white. Neighborhood black children attended school on the first floor of the African Meeting House. After legislation desegregated city schools in 1855, the Phillips School was one of the first to accept black students.

Born a free man, John J. Smith moved from Richmond, Virginia to Boston in 1848. A leading abolitionist, his home was a stop on the Underground Railroad. He helped recruit the U.S. Army’s all-black 5th Cavalry. Smith would later be elected to the state Legislature three times. An all-white congregation from its inception, the Third Baptist Church of Boston was constructed in 1807. Abolitionist Timothy Gilbert challenged the congregation’s segregated seating policy of the 1830s by having black parishioners sit in his pew. He was eventually expelled. After the Civil War, the African Methodist Episcopal Church purchased the church and worshiped there until 1939.

An escaped slave, Lewis Hayden occupied the home with his wife Harriet. Leaders in the abolitionist movement, the Haydens used their house as a way station on the Underground Railroad. Harriet Beecher Stowe visited the residence in 1853 while conducting research for “Uncle Tom’s Cabin.” A future state legislator, Smith helped to recruit soldiers for the 54th Regiment.

Built circa 1843, the house was constructed by leading business owner and community leader John Coburn. He was also actively involved in the abolitionist movement and held key positions in several organizations, including the New England Freedom Association.

These five residential buildings are typical examples of homes occupied by 19th century black Bostonians. The four single-family homes were built between 1799 and 1853. The apartment building was constructed around 1885 to help satisfy the growing population’s need for less expensive housing. America’s first published black historian, William Nell lived on Smith Court in the mid-1800s.

This historic educational space was the first purpose-built public school for African-American children in the country. After school desegregation in 1855, the building was used as a furniture warehouse and then the headquarters for a black Civil War veterans association. Built in 1834, it has been adapted to house the galleries and exhibits of the Museum of African American History. Built in 1806, the African Meeting House is the country’s oldest freestanding African-American church. It also housed a school for black children until the construction of the Abiel Smith School. The church was the setting for oratories by several renowned abolitionists, including William Lloyd Garrison. Frederick Douglass helped recruit soldiers here for the 54th Regiment.
The Black Heritage Trail is approximately 1.6 miles long. Most of the sites along the trail are still used as private residences and are not open to the public. Because it is part of the Boston African-American National Historic Site, National Park Service rangers provide free guided tours. How to See Boston in 1 Day Must Do Activities For First Time Visitors To Boston