Chinatown in Boston is the only historic Chinatown in New England. The area first became populated by Chinese immigrants in the early 1890’s. Before that, the area was settled by White Anglo-Saxon Protestants. Irish, Jewish, Italian, and Syrian immigrants also all lived in the area at one time or another because of the low cost of housing and job opportunities in the area. In the late 19th century, manufacturing plants moved into the area and remained active through the 1990’s.

Today, Boston’s Chinatown is still a center of Asian-American life in New England. The many markets offer rows of fresh vegetables, and mounds of seafood or sweet-tasting delicacies. Try Chinese, Cambodian, Thai, Vietnamese, or Japanese restaurants, and pose for photos at the Chinatown Gate.

The only historic Asian enclave of its kind in New England, Boston’s Chinatown traces its history back to the late 19th century. The neighborhood, constructed on tidal flats that were filled in during the early 1800s, became the residential, commercial and cultural hub of the city’s Chinese community as well as other Asian immigrants. Today, the bustling neighborhood is filled with a dense mix of historic buildings and Asian-themed shops and restaurants. It is the third-largest Chinese neighborhood of its kind in the nation. The community’s boundaries are Surface Road as well as Essex, Kneeland and Tremont streets.

The city of Boston reclaimed tidal flats in the early 1800s to provide more space for residential housing. Initially settled by Anglo-Bostonians, the neighborhood became less desirable after the construction of rail lines. The area would be resettled by a succession of ethnic groups, including Irish, Jewish and Italian immigrants. Each group supplanted the previous inhabitants to take advantage of the job opportunities and affordable housing in the area. In 1870, Chinese workers were brought to the Boston area from San Francisco to help break a strike at the Sampson Shoe Factory. Four years later, many of these workers and their families moved to what became known as Ping On Alley and opened a number of laundries. The first Chinese restaurant, Hong Far Low, opened in 1875. During this period, a number of factories moved into the area and created Boston’s historic garment district that remained active until the 1990s.

As more laborers arrived in Boston before the turn of the century, they settled in the burgeoning Chinese community. Because of the Exclusion Act of 1882, the enclave consisted mainly of men. This changed in the 1930s, when the government allowed their wives and children to immigrate to the United States. After the Exclusion Act was overturned during World War II, the neighborhood boomed in the 1950s. Large sections of the neighborhood’s residential and commercial buildings were demolished in the 1960s and 1970s to make room for the elevated Central Artery and Massachusetts Turnpike. When these roadways were placed underground as part of the Big Dig transportation project, Chinatown regained much needed urban green spaces. The neighborhood is experiencing gentrification as it continues to be the epicenter of Asian-American life in New England.

An elegant paifang gate marks the official entrance to Chinatown. Built in a traditional Chinese style, the archway spans Beach Street, the heart of the community, near the intersection with Surface Road. Two decorative imperial guardian foo dogs flank the archway. A gift of the Taiwanese government in 1982, the gate has two inscriptions. One is a Chinese proverb stating that a good person is loyal, honest and polite. The other inscription relays the sentiment that everything under the sun belongs to the people. Community murals and old advertisements still adorn the exterior walls of several buildings in the neighborhood.

Part of the Rose Kennedy Greenway, Chinatown Park features bamboo accents, unique water fountains and Chinese-inspired architectural details. The one-acre linear park also includes a variety of public artwork along with a section of pavement painted like a Chinese chessboard. The pattern represents heaven and earth in Chinese culture. A landscaped garden exhibits plants indigenous to Asia, such as cherry trees and chrysanthemums.

Located on Washington Street, the Hayden Building was constructed in 1875. The four-story brownstone, listed on the National Register of Historic Places, is Boston’s only remaining commercial building designed by the famed architect Henry Hobson Richardson who also designed the Trinity Church.

Popular cultural celebrations in the neighborhood include the Lantern and the August Moon festivals. The Lantern Festival takes place during the Chinese New Year. The festivities include street food and musical performances as well as fireworks and a parade. The neighborhood’s largest annual cultural celebration, the August Moon Festival also features food, music and entertainment. Vendors offer a wide variety of traditional Asian arts and crafts, food and other items. In addition to performances of Chinese opera, you can enjoy folk dancing, martial arts exhibitions and lion dancers from around the world.

The Theater District is home to more than a dozen major performing arts venues. Patrons enjoy a variety of Broadway and off-Broadway theatrical productions, including dramas and musicals. The neighborhood also contains dance and comedy clubs along with the Wang Center for the Performing Arts, the historic Opera House and St. Paul’s Cathedral.

Once the setting for the colonial-era garrison that protected the city, Fort Point is a revitalized waterfront neighborhood. Providing many exterior scenes for the movie “The Departed,” Fort Point is a haven for artists, galleries and restaurants. The neighborhood is home to the Institute of Contemporary Art and Boston Children’s Museum.

Old Town Trolley is a convenient way to explore Chinatown while maximizing your vacation time. The Asian-American experience is in full bloom here with with a plethora of shops and restaurants to choose from that represents a wide variety of Asian cultures. Find the lowest price and money-saving packages by purchasing tickets direct through our website Know Before You Go Complete Guide to Back Bay Boston 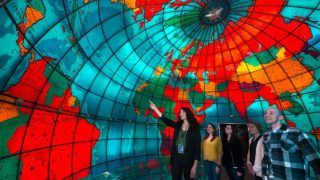