If you’re up for a climb, you’ll be rewarded with stunning views of Key West and the ocean. The Key West Lighthouse was built in 1825 to help the many ships entering the port avoid the hazardous reefs. Today, you can climb the 88 iron steps to the top of the tower for a scenic look at what the lighthouse keepers watched over for more than 120 years. Tour the grounds to see the Keeper’s Quarters which have been restored to their original charm and view the displays of nautical artifacts, antique furnishings, maps and vintage photos. Spanish settlers were the first Europeans to inhabit the Florida Keys, and after discovering a burial mound on one of the southernmost islands, they named it Cayo Hueso, meaning Bone Island. The Spanish name would be anglicized into its present day name of Key West. Spain transferred control of the island to the United States in 1821. That same year, entrepreneur John Simonton purchased Key West for $2,000. Having conducted considerable business in Cuba, Simonton recognized that the island would be an important way station on the Atlantic and Gulf of Mexico trade routes.

The U.S. Navy would even establish a naval base in Key West in 1823. Salvaging goods from sunken and wrecked vessels was a major industry in Key West because of the large number of ruined vessels. It soon became apparent that a lighthouse would be essential for the safety of commercial and military vessels navigating the shallow reef-filled waters around Key West.

History of the Key West Lighthouse

From Sambo Key to Whitehead’s Point

After conducting a survey of the area around Key West in 1822, Commander Matthew Perry submitted a report recommending that four lighthouses be constructed at various points in the Florida Keys. After Congress allocated the funds in 1824, Samuel Lincoln left Boston aboard a ship carrying supplies to build the first lighthouse. When the vessel failed to arrive in Key West, a second ship by the name of George Stodder was dispatched to construct a lighthouse on Sambo Key. When it arrived, the team responsible for the project determined that Sambo Key was not a suitable site. They instead chose Whitehead’s Point, which is the southernmost tip of Key West.

Completed in 1825, the first lighthouse stood 65 feet tall. It held 15 whale oil lamps housed in 15 reflectors. When the first keeper, Michael Mabrity, died from yellow fever in 1832, his wife Barbara became the head keeper. She would serve in this capacity for the next 32 years. Although the building had survived several previous storms, the Great Havana Hurricane of 1846 destroyed the lighthouse and killed 14 people who had taken refuge in the tower before it collapsed, including six of Barbara’s children. A second 50-foot conical tower was constructed in 1848. Although shorter than the original lighthouse, the second beacon was built further inland on one of the highest points in Key West, which was 15 feet above sea level. It held 13 amps and 21 reflectors. Ten years later, it would receive a third order Fresnel lens, which is still present at the lighthouse today. As the Civil War loomed on the horizon, Barbara was replaced as keeper at the age of 82 because of her vociferous pro-Confederate views. Key West remained in Union hands throughout the war. In 1887, the keeper’s quarters were built to house the keeper’s family and that of his assistant. Although the building had a communal kitchen and dining room, the families had separate living quarters and entrances. The tower was raised to 100 feet above sea level because trees and construction near the lighthouse began to obscure the view in 1894. Other improvements over the years included adding a balcony, electrifying the light and automating the beacon.

The Key West Lighthouse remained in operation until 1969, when it was declared to be obsolete by the U.S. Coast Guard and deactivated. Three years later, it was transferred to Monroe County, which leased it to the Key West Art and Historical Society for use as a museum.

Located at 938 Whitehead Street, the fully restored Key West Lighthouse and Keeper’s Quarters Museym remains a historic landmark on the island. Open to the public for a small admissions fee, the museum admits guests from 9:30 a.m. until 4:30 p.m. every day except Christmas. The lighthouse is a testament to the island’s maritime history. In addition to honoring the lives of the men and women who maintained the lighthouse from the late 19th century, the museum also features the first order Fresnel lens from the decommissioned Sombrero Key Lighthouse. Visitors can climb the 88 steps to the catwalk for a birds-eye-view of Key West. Home to the famed author during the 1930s, the Ernest Hemingway House and Museum provides a glimpse into the life of the acclaimed novelist affectionately known as Papa. Built in the 1850s and surrounded by a flourishing garden, the limestone house contains period furnishings and Hemingway heirlooms. 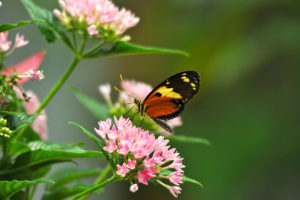 The Key West Butterfly and Nature Conservatory is one of the most popular attractions in the self-styled Conch Republic. It houses more than 50 species of these colorful creatures as well as tropical birds, cascading waterfalls and lush gardens. The Southernmost Point Buoy is a famous landmark identifying the southernmost public point in the continental United States. Located at the intersection of South and Whitehead Streets, the colorful marker is a popular spot for photos.

Many find Key West strange during the day; but after the sun goes down, the restless souls of the island’s frightful past begin to stir. You will hear their tales that have been all but forgotten as you travel the narrow, dark streets of Old Town – filled with 19th century wooden houses that hold on to the secrets of their former inhabitants. Stories so tragic, so chilling, you’ll see why Key West is one of the top ten most haunted cities in America. This and more await you on your Key West ghost tour.

One of only two preserved Treasury-class cutters, the highly decorated USCGC Samuel D. Ingham is the centerpiece of the USCGC Ingham Maritime Museum. Declared a National Historic Landmark in 1992, the museum ship chronicles the lives of U.S Coast Guard members who serve the country during war and peace.