Step inside Smithsonian’s American Art Museum and discover what amazing talent lives and has lived in our nation throughout history. The first federal art collection, more than 40,000 works of art represent over 7,000 American artists who hail from every region, cultural and ethnical background of the United States. Here, visitors can view paintings, prints, photography, sculpture and more from artists who lived and worked throughout the United States, throughout the centuries.

Spanning back 300 years and across generations, each piece at the American Art Museum exemplifies the marvelous abilities of our people—and their freedom to express themselves through a variety of artistic mediums. See works by John Singleton Copley, Winslow Homer, John Singer Sargent, Childe Hassam, Georgia O’Keeffe, Edward Hopper and Jacob Lawrence, just to name a few. Enjoy learning about American artists and their work and discover the diversity of our heritage. The American Art Museum is a must-­see for everyone who enjoys learning about and viewing the arts. 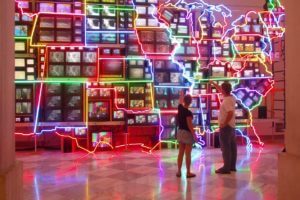 Commonly known as SAAM, the Smithsonian American Art Museum features a renowned collection of American art dating from the Colonial period to the present day. The priceless works include a variety of media that ranges from paintings and sculptures to photographs and folk art. In addition to Impressionist paintings, large portions of the collection focus on the Gilded Age and the New Deal periods in the United States. There are also key pieces from African-American and Latino artists. The collection is designed to capture the character, aspirations and imagination of the American people. There are works by Georgia O’Keefe and John Singleton Copley as well as Winslow Homer and John Singer Sargent. The museum’s main exhibition space is located inside the National Landmark Old Patent Office Building, which also houses the National Portrait Gallery. The collection’s craft-focused exhibits are displayed inside the separate Renwick Gallery.

History of the American Art Museum

The collection dates back to 1829 when John Varden championed the idea of a museum in the nation’s capital dedicated to European art. In 1841, a portion of Varden’s collection was displayed in the Patent Office Building, the current home of the museum, which was then a functioning government office. With its establishment seven years later, the Smithsonian Institution began to oversee national collections. Many of the American artworks were transferred to the Smithsonian Castle on the National Mall.

During the probate of Harriet Lane Johnston’s estate in 1906, a federal court decided that the newly formed Smithsonian’s National Gallery of Art met the criteria described in the former first lady’s will. When this organization chose to focus on European works because of Andrew Mellon’s donated collection, another museum called the National Collection of Fine Art was established in 1937. The organization assumed the role of promoting and preserving the works of American artists. When the Old Patent Office Building was saved from demolition, it became the home of the museum in 1957. The Renwick Gallery was added 25 years later. The name was changed in 1980 to the National Museum of American Art and again in 2000 to its present moniker, the Smithsonian American Art Museum.

The museum’s collection is rotated through several permanent gallery spaces. These include exhibitions dedicated to Early America as well as the 19th and 20th centuries. Key pieces in this area of the collection include works by Gilbert Stuart and John Singleton Copley, such as Copley’s 1765 portrait of Mrs. George Watson. The Indian Gallery contains George Catlin’s original paintings from the 1830s. Frederic Remington is another featured Westward Expansion artist. Impressionist and Gilded Age artists include Childe Hassam and Mary Cassatt. Other exhibits feature Contemporary, African-American and Latino artwork. Visitors can experience paintings that chronicle the Harlem Renaissance, the Jazz Age and the Civil Rights Movement as well as the influence that Hispanic culture has had on America. Special galleries are also specifically set aside for photographs, works on paper, sculptures and self-taught artists.

The Luce Foundation Center for American Art is a storage and restoration facility that is open to the public. Visitors are free to ask curators and restoration experts questions to gain insight into the museum’s role in art preservation. The Renwick Gallery features numerous permanent, rotating and temporary exhibits highlighting a variety of modern American crafts and decorative arts.

The Old Patent Office Building is situated in the Penn Quarter neighborhood at the intersection of Eighth and F Streets Northwest. In addition to self-guided tours, you can take advantage of one of the several docent-led tours that are available each day. The Luce Foundation Center is the starting point for a kid-friendly scavenger hunt. The museum is open daily from 11:30 a.m. until 7 p.m. except Christmas Day. There is limited metered street parking and several garages nearby. The museum is across the street from the Gallery Place-Chinatown Metro station that serves the Red, Yellow and Green lines. Complimentary Wi-Fi is available in the Kogod Courtyard.

The Renwick Gallery is located nine blocks to the west near the White House on Pennsylvania Avenue. It is open every day except for Christmas from 10 a.m. until 5:30 p.m. Guided tours are offered at noon Monday through Saturday. Parking near the White House is limited. The nearest Metro stations are Farragut West on the Orange, Blue and Silver lines and Farragut North serving the Red line. Strollers are not permitted inside the Gallery.

The Verizon Center is a major multipurpose indoor arena. It hosts the city’s NHL, NBA and WNBA franchises as well as concerts, conventions and other large events. The building has been nicknamed the “phone booth” because of the series of telecommunications companies that have had naming rights over the years.

The National Building Museum chronicles the history of architecture, construction, design and engineering in the United States. Housed in the former Pension Building, the landmark Renaissance Revival edifice was added to the National Register of Historic Places in 1969.