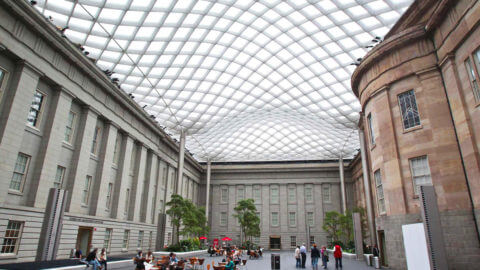 Meet America’s most remarkable citizens face­-to­-face at Smithsonian’s National Portrait Gallery. Stroll through the historic building, which was originally the U.S. Patent Office, and see paintings, photos, sculptures and more of famous Americans who have helped shape our nation. From the stunning exhibit of our Presidents, to photos of celebrities, scientists, entertainers, sports figures and more, the National Portrait Gallery offers a unique experience to guests of every age.

History of the Gallery

In 1962, Congress authorized the creation of the National Portrait Gallery. The institution’s mission is to acquire and display portraits of men and women who have made a significant impact on American history and culture. The roots of the museum go back to 1886 when Robert Winthrop proposed a national portrait gallery for the United States after visiting a similar institution in London. The Smithsonian Institution commissioned and acquired various works beginning in 1919. The artwork was originally displayed in the Museum of Natural History. Industrialist and philanthropist Andrew Mellon donated his extensive collection to the United States in 1937. It formed the basis of the National Gallery of Art. Mellon stipulated that the portraits in the collection would be transferred to a unique gallery if one were ever established. In 1953, the Old Patent Office Building was scheduled to be razed and replaced with a parking lot. After an angry public outcry, the building was saved for use as a Smithsonian museum. Once the portrait gallery was established, the Institute’s portraits along with the works specified in Mellon’s gift formed the nucleus of the new museum’s collection. The National Portrait Gallery’s collection expanded over the ensuing decades through acquisition, donation and commissioned works.

The National Portrait Gallery is housed in a portion of the historic Old Patent Office Building. The Greek Revival-style sandstone and marble structure was built between 1836 and 1867. The porticos are modeled after the Parthenon. One of the oldest public buildings in the city, the building served as a military hospital during the Civil War where Clara Barton and Walt Whitman worked as nurses. It was also the setting for President Lincoln’s second inaugural ball. The building occupies a parcel of land set aside in Pierre L’Enfant’s original plan for the District of Columbia that was designated for a monumental public building. The city’s historic preservation movement saved the building from demolition. President Eisenhower signed legislation turning it over to the Smithsonian for a museum five years later. Even though it has undergone several renovations, the building is considered one of the city’s finest examples of Greek Revival-style architecture. The Gallery contains the only complete collection of presidential portraits outside of the White House. The America’s Presidents exhibit includes Gilbert Stuart’s Lansdowne painting of George Washington and his unfinished painting of the president. You can also view the “cracked plate” photograph of Abraham Lincoln taken by Alexander Gardner. In addition to works by Gardner, the museum boasts extensive collections of works by his fellow photographer Matthew Brady and graphic artist Howard Chandler Christy. Notable works include “Beauford Delaney” by Georgia O’Keeffe, “Frederick Douglass” by an unknown artist and “John Brown” by Augustus Washington as well as “Osceola” by George Catlin and “Martha Washington” by Gilbert Stuart.

The American Origins Exhibit is a series of 17 galleries arranged in chronological order with portraits of individuals who played a key role in the history of the country from the first contact with Native Americans. Four galleries on the third floor display portraits of major American cultural and political icons of the 20th century. The third floor is also the location for BRAVO!, which showcases historical figures in the performing arts and a collection entitled Champions that salutes famous sports figures. There are also permanent exhibits dedicated to the Civil Rights Movement and the female Supreme Court justices.

Closed Christmas Day, the National Portrait Gallery is open 364 days a year. The museum is open free of charge from 11:30 a.m. until 7 p.m. Limited metered street parking is available near the gallery. The museum is one block from the Gallery Place/Chinatown Metro stop that serves the Red, Green and Yellow lines. The wheelchair-accessible facility has an elevator on its Seventh Street, NW entrance. The museum is also wheelchair accessible. The Gallery conducts regularly scheduled docent-led tours as well as special tours for individuals who are hearing and visually impaired. Contact the museum for details. The Gallery does not permit visitors to touch the artwork. Visitors must also carry backpacks, purses and bags in front of their bodies to prevent accidental contact with the displays. Photography and making sketches are allowed. Museum personnel can provide additional information on restrictions. Eating and drinking are only allowed in the museum’s courtyard café, which features complimentary Wi-Fi.

Ford’s Theater is the location where John Wilkes Booth shot President Abraham Lincoln the evening of April 14, 1865. The historic theater is still used for a variety of stage performances. A self-guided tour enables you to view artifacts related to that fateful night. The tour also includes the Petersen House across the street, which displays the bedroom where the president died the following day. The exhibits also chronicle the efforts to capture Booth and his co-conspirators as well as Lincoln’s enduring legacy.

The Verizon Center is a multipurpose indoor arena situated atop the Gallery Place Metro station. The arena hosts concerts and other major events. It is the home venue for various professional sports franchises, including the NBA Wizards, the WNBA Mystics and the NHL Capitals, as well as the Georgetown Hoyas. National Gallery of Art
Up Up
Back to top