Just like the highly acclaimed magazine, the National Geographic Museum offers a stunning representation of the world we live in within its collection of exhibits, both permanent and changing. Adults and children will be intrigued by the colorful, interactive and extraordinary displays. From sculptures created entirely out of garbage to live frogs of every color in their natural habitats, there’s always something fascinating happening at the National Geographic Museum.

The National Geographic Society was established in January 1888 when a group of 33 explorers and scientists met in the private Cosmos Club on Lafayette Square. Their goal was to create an organization that would foster the increase and dissemination of geographic knowledge. The society’s first president was Gardiner Greene Hubbard, father-in-law of Alexander Graham Bell who would succeed him nine years later. Along with his son-in-law Gilbert Grosvenor, the famed inventor devised the successful membership program and the first use of photographs as a way to illustrate stories in the magazine. The society is one of the world’s largest non-profit scientific and educational organizations. It has expanded its scope to include archaeology, natural science, and environmental conservation. In addition to studying and documenting world cultures and history, the society sponsors and funds scientific research and exploration.

The National Geographic magazine was first published nine months after the society was founded. There are 12 monthly issues. Article subjects include current events, culture, and world history as well as popular science and geography. The magazine began using its famous trademarked yellow border in 1910. It is published in 40 languages around the world with a circulation of just under seven million. More than 60 million people read an issue each month. The society also publishes National Geographic Explorer and National Geographic Kids to help classroom education and encourage early learning. Society television programs have aired on various networks since 1964. The NatGeo Channel was launched in 1997. The society also has a website that features additional content.

Located on the first floor of the organization’s headquarters in Washington, D.C., the museum’s two large galleries display a variety of permanent and changing exhibitions that enable visitors to explore and discover the natural world. It features a wide range of interactive displays and stunning photo collections that are suitable for patrons of all ages. Celebrating the society’s more than 125-year history, the museum provides a glimpse into the unique perspective of renowned scientists, historians, photographers, and explorers. See how these individuals study and chronicle places and events that inspire people to care about the planet. Exhibits, which take approximately an hour to view, are related to culture, history, society and natural history. In addition to photographs and memorabilia, the exhibits feature live animals, ancient artifacts, 3D models and captivating films. Guided tours are available.

The National Geographic Museum is open daily from 10 a.m. until 6 p.m. It is closed Thanksgiving and Christmas. The ticket booth is located at the 17th street entrance. Discounts to the general admission price are available to seniors, students and military personnel. Exhibits in the M street lobby can be viewed free of charge. The museum is located near the Farragut North stop on the Metro Red line. You can also use the Farragut West stop on the Blue, Orange, and Silver lines. Metered street parking is located on 16th, 17th, and M streets.

Scott Circle Park contains an equestrian statue of Lieutenant General Winfield Scott who served as the Commanding General of the Army for 20 years, the Daniel Webster Memorial and the Samuel Hahnemann Monument. The Webster Memorial includes a larger-than-life-size bronze statue of the famed political leader and the Classical Revival-style Hahnemann Monument honors the founder of homeopathy. The Charles Sumner School Museum and Archives were built in 1872. It is named in honor of U.S. Senator Charles Sumner, an abolitionist and staunch civil rights activist featured in the acclaimed Steven Spielberg film “Lincoln.” The building was used to educate African-American teachers after the Civil War and as the headquarters for the segregated school district. In addition to artifacts and memorabilia, the small museum hosts rotating art exhibits and the DC Women’s Hall of Fame.

Construction on the Romanesque Revival-style Cathedral of St. Matthew the Apostle began in 1893. The interior of the historic red brick, sandstone, and terracotta edifice features marble and semi-precious stone architectural details. Each year, the church is the setting for the famous Red Mass on the day before the start of the new Supreme Court term.

Built in 1886, the historic Metropolitan African Methodist Episcopal Church is the oldest continuously Black-owned property within the city’s original 10-square mile area. It was the setting for memorial services honoring Rosa Parks, Blanche Bruce, the first African-American U.S. Senator, and Frederick Douglass. The building is listed on the National Register of Historic Places. 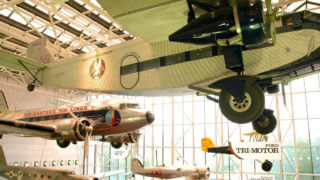 Smithsonian Air and Space Museum
Up Up
Back to top