Upon arrival at the Supreme Court, visitors are often struck by the imposing marble building. Architecturally magnificent, the neoclassical structure was built in 1935 to become the permanent home to the Supreme Court. Walking along the hallway towards the Courtroom, guests are greeted by busts of all the former Chief Justices. The Supreme Court is the highest judiciary authority in the United States and hears about 100 cases each year, although more than 7,000 are submitted before them. Visitors can tour the Supreme Court building, hear lectures on the history of the court and how it works, sit in on sessions on specified days and times and view various exhibits throughout the year.

Despite its central role as one of the three main branches of government outlined in the U.S. Constitution, the Supreme Court did not have its own venue to conduct business for the first 145 years of its existence. The Court initially met in the Merchants Exchange Building while the capital was located in New York. When the nation’s capital moved to Philadelphia beginning in 1790, the Court met in Independence Hall and City Hall. With the establishment of the federal city 10 years later, the Supreme Court occupied chambers in various parts of the Capitol Building. It would also convene in a private residence for a short time after British soldiers burned Washington, D.C. during the War of 1812. The Court would return to the Capitol and occupy the Old Supreme Court Chamber from 1819 until 1860. With expansion of the Capitol, the Court was relocated and convened in the Old Senate Chamber from 1860 until 1935.

Former president and then Chief Justice of the Supreme Court, William Howard Taft persuaded Congress in 1929 to authorize the construction of a separate building for the Court. Architect Cass Gilbert was selected to design the new federal building. The construction project began in 1932. Neither Taft nor Gilbert survived to see the completed building, which was finished in 1935. Chief Justice Charles Hughes and Cass Gilbert, Jr. oversaw the construction of the new Courthouse, which was completed under budget. Taft had asked Gilbert to design a building that reflected the dignity and importance of the Court. The classical Corinthian-style architecture easily blends with the nearby congressional buildings. The building’s scale is on par with its equality as one of the main branches of government. The cornerstone was laid October 13, 1932. Its exterior and certain interior architectural details are comprised of marble quarried in Vermont, Georgia and Alabama. The detailed interior wood trim is mahogany and quarter-sawn American white oak. The Great Hall features columns made from Spanish Ivory Vein marble and a floor with Italian and African marble inlays.

The Supreme Court Building does not offer guided tours. You are encouraged to view the public spaces at your own pace. The exterior grounds as well as portions of the ground and first floors are open to the public. The building’s main façade faces west toward the U.S. Capitol. The main plaza includes fountains, flagpoles and benches as well as marble candelabra depicting “Justice” holding a sword and scales. A bas-relief sculpture of the Greek deities known as the Three Fates knit the thread of life. The base of each flagpole contains symbolic designs of scales, a sword, pen and book as well as the elements of earth, air, water and fire.

Two sculptures of seated figures by James Earle Fraser flank the main entrance. While the female figure entitled Contemplation of Justice is situated on the left, the male figure Guardian of Authority is found on the right. The 6.5-ton bronze doors depict historic scenes from the development of law created by John Donnelly, Jr. Above the entrance is the inscription “Equal Justice Under Law.” On the east side of the building, there are several sculptures of famous lawgivers by Hermon MacNeil. These include Confucius, Moses and Solomon. The east façade bears the inscription “Justice, the Guardian of Liberty.”

Inside the building, visitors can tour the Great Hall. It features busts of former chief justices and friezes depicting heraldic devices and profiles of famous lawgivers. The most famous is the 1883 bust depiction of John Marshall by William Wetmore Story. It stood on the west lawn of the Capitol until it was relocated in 1981. You can also see two five-story self-supporting bronze and marble staircases. The Court Chamber features 24 imported Italian marble columns as well as sculpted marble panels of famous lawgivers and legal themes.

Seating during oral arguments and other proceedings in the courtroom are available to a limited number of guests on a first-come, first-served basis. Various lectures, films and court-related exhibits are offered throughout the day. Docents present lectures about the courtroom that last approximately 30 minutes. The lectures start at the bottom of the hour when the court is not in session.

The Supreme Court Building is open Monday through Friday from 9 a.m. until 4:30 p.m. with the exception of federal holidays. It is closed Saturdays and Sundays. Portions of the building may be cordoned off when Court is in session. Visitors pass through security and enter the building from the plaza located beside the main steps. Admission is free of charge. The largest crowds gather from March through June. Because the building contains working offices, visitors are asked to tour as quietly as possible. Video and still photography are prohibited. Eating and drinking are only allowed in the cafeteria. The closest Metro stops are Capitol South on the Orange, Blue and Silver lines and Union Station on the Red line Featured in scenes of the film “National Treasure: Book of Secrets,” the Library of Congress is the oldest cultural institution in America. You can take a one-hour docent-led guided tour of the Thomas Jefferson Building to learn about the building’s art and architecture. The narration also includes information about the Library’s history and collection as well.

A symbol of American democracy across the globe, the U.S. Capitol is among the most architecturally impressive buildings in the country. During public tours, visitors can learn about its history as well as view the Rotunda and the Crypt along with sculptures, paintings and other works of art.

Adjacent to the north portico of the Capitol, Upper and Lower Senate Parks feature landscaped gardens, a reflecting pool and fountains. You can enjoy shade tree-lined pathways, memorials and the historic Summerhouse.

Old Town Trolley is a convenient way to explore the Supreme Court while maximizing your vacation time. Upon this lofty perch sits the iconic marble facade where the most important legal decisions in the United States are made. Find the lowest price packages by purchasing tickets direct through our website. 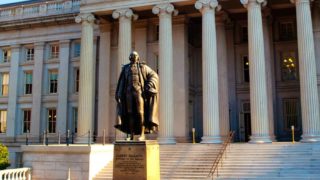 Old Post Office Pavilion & Bell Tower
Up Up
Back to top