The Old South Meeting House was the largest building in colonial Boston and stands today as a symbol of the right to free speech and free assembly. The most well known meeting that took place here was held by the Sons of Liberty on December 16, 1773. The discussion in protest of the British tax on tea led directly to the Boston Tea Party, which took place later that very evening. 5,000 colonists gathered in the Old South Meeting House that day, an example of one of the larger crowds that could not have been accommodated by Faneuil Hall.

The building was completed in 1729 and was originally intended to serve as a Puritan meetinghouse, but was often used for public gatherings as well. Between 1775-1776 the British besieged Boston and made a point of destroying and vandalizing symbols of the patriotic cause. During this period they gutted the interior of the Old South Meeting House, brought in dirt and used it for a British riding school, and used other areas as lounges for the British soldiers. It took the congregation 8 years to raise enough funds to repair the building.

In 1872, the Old South Meeting House was almost destroyed by the Great Fire of Boston. The congregation built a new Old South Church at Copley Square and the original building opened to the public as a museum in 1877. Today the building is an active gathering place for meetings, lectures, and readings, in addition to featuring historical exhibits. The tense relationship between American colonists and the British Crown was further strained with the enactment of the Tea Tax. The Old South Meeting House was the gathering place for a large crowd on the night of December 16, 1773 because it was the largest building in Colonial Boston. Numbering over 5,000, the assembled crowd was anxious to discuss the status of ships carrying tea docked in the harbor. As the night wore on, patriot Samuel Adams spoke the words “This meeting can do nothing more to save the country.” It was a covert signal for the Sons of Liberty to take action. Dressed as Mohawk Indians, the men boarded the three ships and threw the cargo of tea into the Boston Harbor. From that moment, the Old South Meeting House became known as the place where the Boston Tea Party began.

History of the Meeting House

In 1669, a group of Puritans split from the original Pilgrim church in Boston and constructed a wooden church on a site that was once a garden belonging to Governor John Winthrop. The simple wooden structure, called the Cedar Meeting House, was replaced with the current Georgian-style, brick building 60 years later. Keeping with the Puritan attitude of simplicity, the building has plain glass windows and bricks arranged in a Flemish bond pattern. A gilded weathervane tops the 183-foot-tall steeple, and the belfry contains a historic bell cast by Paul Revere. The 1768 clock still keeps proper time. The church’s first minister was Thomas Thatcher, a physician who published the first medical tract in Massachusetts. The house of worship was a gathering place where colonists from every strata of life occasionally assembled to discuss and debate political events.

Because Faneuil Hall was too small, the Old South Meeting House hosted a town hall meeting in 1768 protesting the impressments of New England sailors into the British navy. The crowd was also angry about the seizure of the sloop Liberty on customs violations. Although the meeting accomplished its goals, the rising tensions led Britain to station 4,000 troops in Boston, which many patriots considered an occupying force. After the Boston Massacre, another town meeting in the church forced Governor Hutchinson to relocate the troops from the city to Castle William located on an island in the harbor. The church was the site for memorial services on the anniversary of the massacre until 1775. Because of its role in numerous dramatic town meetings that led up to the Revolution, including the large gathering on the night of the Boston Tea Party, the Old South Meeting House earned the nickname the “Sanctuary of Freedom.” During the British occupation of Boston early in the American Revolution, the church bore the brunt of their fury. The pews, pulpit and other furnishings were torn down and burned as firewood. Wagonloads of dirt were brought into the church so that it could be used as an indoor riding rink for officer’s horses. Soldiers also stole various items, including the manuscript “Of Plymouth Plantation” by William Bradford that was hidden in the tower. The Church of England would return the manuscript in 1897. After the war, the congregation spent eight years restoring the building.

A parish church until 1872, the building was saved from destruction during the Great Boston Fire that year by the timely arrival of a firefighting crew from Portsmouth, New Hampshire. Although the building experienced considerable damage, concerned Bostonians sought to save it from demolition because of its historic significance. Public records show that this was the first time a public building in the city was spared for such a reason. The fire did cause the city’s population to shift toward the Back Bay neighborhood and away from downtown. The congregation built the new Old South Meeting House in Copley Square where it continues to worship. Once a year on the Sunday before Thanksgiving, the congregation holds its weekly service in its historic home. Nestled in the heart of downtown, the church became a public museum in 1877.

The “Voices of Protest” exhibit features lifelike figures and interactive displays to relay the history of this building, which is considered one of America’s most important Colonial sites. Another multimedia exhibit entitled “If These Walls Could Speak” takes visitors through a series of events that occurred in Boston leading up to and during the American Revolution. You can also enjoy a variety of scavenger hunts designed for guests of all ages.

In addition to standing in the precise location where Samuel Adams launched the Boston Tea Party, you can view the second-tier gallery that was used for slaves, servants and unruly teenagers. Phyllis Wheatley, America’s first published African-American author, worshiped here as a slave. It is the place where Benjamin Franklin was baptized, George Washington spoke out against the British desecration of Boston and Elizabeth Foster, known by the nom de plume Mother Goose, sang hymns. Ralph Waldo Emerson and Julia Ward Howe also recited their famous works here. The museum hosts over 100 special events, presentations and concerts throughout the year.

A stop on the Freedom Trail, the Old South Meeting House is open to the public for a nominal fee. Student, senior and military discounts are available. Children under five are admitted free. From November through March, the museum is open daily from 10 a.m. until 4 p.m. The hours are 9:30 a.m. until 5 p.m. April through October. The Old South Meeting House is closed on Thanksgiving, Christmas Eve, Christmas and New Year’s Day. The museum is wheelchair accessible. Because parking downtown is limited, it is recommended that guests use public transportation. The closest “T” stops are State Street on the Blue and Orange lines, Downtown Crossing on the Red Line and Government Center on the Green Line.

The Old State House is the oldest public building in the country. The museum contains a wide-ranging collection of artifacts related to the American Revolution. View the floating spiral staircase and other unique architectural details of this historic landmark. The site of the Boston Massacre is located nearby.

Post Office Square is an urban park adorned with fountains, a pergola and central lawn. There is also a café, complimentary Wi-Fi, a lending library and summer midday concerts. Featuring cushioned benches, the park is a popular warm weather lunchtime destination.

After seeing where it all started, head to the waterfront to tour the Boston Tea Party Ships & Museum. See artifacts from that fateful night, including one of the actual tea chests. You can also view the short film “Let It Begin Here” before touring a replica ship for an interactive experience of the events that took place that historic evening.

Downtown Crossing is a trendy shopping district that hosts department stores, street vendors, restaurants and souvenir shops where you can find special keepsakes to remember your visit. Portions of several streets are closed to vehicular traffic to create a pedestrian-friendly shopping venue. It is also the backdrop for one of Boston’s memorials to the Irish famine. 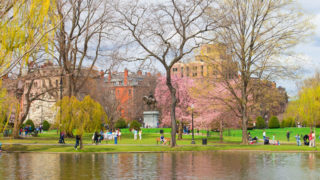 Boston Attractions Things To Do In Copley Square Boston
Up Up
Back to top
We use cookies to give you the best experience. By using our site, you agree to our cookie policy.Accept