The Old State House, built in 1713 on the site of the first Town House, is the oldest surviving public building in Boston. The building served as a meeting place for the exchange of economic and local news and was said to be the center of politics in the colonies. The Declaration of Independence was read from the balcony on the east side of the building, and just below it is the spot where the Boston Massacre took place. The Old State House is one of the most important public buildings in the U.S.

The Old State House attracts many visitors as one of the historic landmarks on the Freedom Trail.

The Old State House’s various rooms housed a merchant’s exchange, rented warehouse space in the basement, the Council Chamber of the Royal Governor, the Massachusetts Assembly (colonial legislature), and the Courts of Suffolk County and Massachusetts Supreme Judicial Court. In 1798, the government functions relocated to the new State House on Beacon Hill and the building served as Boston’s City Hall. In 1841, the building returned to commercial use and in 1881 it was taken over by The Bostonian Society, who began to operate it as a museum of Boston history.

The upper level chambers have been preserved and the rest of the building has been made into a museum.

The center of colonial political, civil and commercial life in Boston, the Old State House is the oldest extant public building in the city. Government offices were located upstairs and the first floor hosted a merchant’s exchange. John Hancock once rented storage space in the basement. One of the most important buildings in Colonial America, the Old State House has stood as a symbol of freedom for more than 300 years. The building, designated a National Historic Landmark in 1960, now serves as a museum commemorating Boston’s role as the Cradle of Liberty.

History of the Old State House 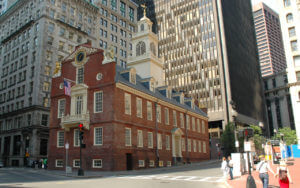 Occupying the site of Boston’s first town hall, which burned in 1711, the Old State House was constructed two years later in 1713 to house the Massachusetts Bay Colonial government offices. The distinctive cupola adorning the state house was once the tallest point in the city. The building contained the council chamber for the royal governor, a central hall where the Massachusetts Assembly met and the courtroom for the Supreme Judicial Court. The inclusion of public balconies in the assembly hall marked the first time that galleries were incorporated into a legislative chamber in the English-speaking world. The interior was rebuilt after a fire in 1747.

James Otis, Jr. delivered an impassioned speech to a state house audience against the Writs of Assistance in 1761 that helped ignite the fire of rebellion. On March 5, 1770, the Boston Massacre took place outside the building’s Devonshire Street entrance. In 1776, after the Declaration of Independence was proclaimed from the east balcony by Colonel Thomas Crafts, the unicorn and lion, symbols of British authority, were torn down from the façade and tossed into a bonfire on King Street. When touring Boston in 1976, Queen Elizabeth II addressed an adoring crowd from the same balcony.

After the war, the building became the seat of the newly elected government of the Commonwealth of Massachusetts until 1798 when the new state house was built on Beacon Street. The edifice served as Boston’s City Hall from 1830 until 1841. During this period, Isaiah Rogers remodeled the interior in a Greek Revival-style and added the distinctive spiral staircase. Abolitionist William Lloyd Garrison sought refuge here from an angry mob in 1835 before being charged with inciting a riot.

After city offices relocated to School Street, the building was used for a variety of commercial purposes until 1871 when it became a museum, which saved the historic building from being razed. Replicas of the original unicorn and lion were installed the following year on the building’s east side. An eagle, the iconic symbol of America, was added to the west side. The State Street “T” stop was constructed in the building’s basement in 1904.

Located in the historic room where the Royal Governor met with his adviser, the Council Chamber in Boston’s Town House exhibit displays period furniture. The artifacts are arranged to depict the appearance of the room 250 years ago. Visitors can see where decisions were made that sealed the fate of British control over Massachusetts and learn about political life in Boston in the years leading up to the revolution. The Old State House: A Hands-on History is an interactive exhibit that enables visitors to explore how the landmark building has changed over the years. In addition to learning interesting facts about the historic events that took place here, you can look behind hidden walls and meet Otis, the State House mouse.

The Boston Massacre exhibit is a multimedia display that chronicles the story of this momentous event in American history. The audiovisual effects transport you back in time to the fateful night of March 5, 1770. You can view artifacts related to the shooting, including Paul Revere’s famous engraving of the massacre. A circle of pavers outside the Old State House marks the location where the massacre took place.

The From Colony to Commonwealth collection illustrates the history of Boston and Massachusetts as it transitioned from a British territory to an entity formed for the common good of its citizens. Highlights include a coat worn by patriot John Hancock, the first governor of Massachusetts, and a sample of tea from the Boston Tea Party.

The Revolutionary Characters exhibit follows the daily lives of several individual Bostonians as they experienced the changes that were occurring in the city during the 1770s. The exhibit includes artifacts related to Lydia Hutchinson and Paul Revere.

The Preservation of the Old State House exhibit chronicles the efforts that have been made over the past 300 years to maintain this historic building. The exhibits show architectural changes, renovations and restorations that have taken place over the years.

The museum is open seven days a week from 9 a.m. until 5 p.m. It closes two hours earlier on Christmas Eve. The Old State House is closed on Thanksgiving, Christmas and New Year’s Day as well as the first week in February. The museum offers discount admission to seniors and college students. Children under the age of 18, military veterans and active duty service members are admitted free. The National Historic Landmark is not wheelchair accessible. Parking is limited in downtown Boston. The easiest way to reach the Old State House is by using the public transportation system known as the “T.” Serving the Blue and Orange lines, the State subway stop is located in the subbasement of the building. The Old South Meeting House is the location where the Sons of Liberty had gathered as part of a larger public meeting waiting for the secret signal to begin the Boston Tea Party. This historic church was the setting for several important events leading up to the American Revolution. Famous parishioners include Phyllis Wheatley, the first African-American author to be published in America, and Elizabeth Foster who wrote under the moniker Mother Goose. Benjamin Franklin was baptized here.

Built in 1749, Kings Chapel was designed by noted architect Peter Harrison. It was called the Stone Chapel during the American Revolution. The belfry contains the last bell cast by Paul Revere. The adjacent burying ground is the oldest cemetery in the city. It contains the graves of John Winthrop, the first Puritan governor of Massachusetts, and Mary Chilton, the first woman to step off the Mayflower. Elizabeth Pain’s headstone is said to have inspired the character of Hester Prynne in “The Scarlet Letter.” Faneuil Hall Marketplace has served as a commercial space and public meeting hall since it first opened in 1742. Named for Peter Faneuil, the wealthy merchant who provided the funding for the venue, it has been the site of numerous significant events in American history. The marketplace houses a variety of retail shops and eateries as well as a recreation of the Boston bar made famous by the television show “Cheers.”

Old Town Trolley is a convenient way to explore the Old State House while maximizing your vacation time. The oldest surviving public house in the city used to be a hotbed of political activism during the Revolutionary-era where many important debates took place. Find the lowest price and money-saving packages by purchasing tickets direct through our website. Boston Attractions Things To Do In Boston Near Faneuil Hall