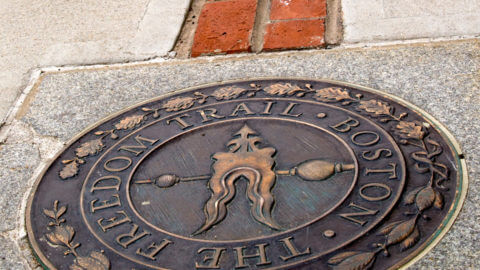 For the average Bostonian, life in the New England colonies during the 17th century was, as you might’ve guessed, not exactly one of ease and leisure. Before they were built by stone or brick masonry, homes were small, dank, drafty and made entirely of wood. This building practice was abolished toward the advent of the 1700s due to the susceptibility of fire. Most of the population subsisted as farmers, the drinking water was unsafe, medicine was still in the Dark Ages, and the average lifespan was just shy of 40 years. These were arduous and challenging times and living under the yoke of an oppressive foreign monarchy would eventually prove too much to bear and, thus, a revolution was born.

Comprised of 16 places of interest, each one a milestone in the evolution of Boston from English colony to independence, the Freedom Trail is an essential component of any trip to Boston. This historic attraction literally lays out Boston’s colonial history before you on the very streets where the city’s most transformative events unfolded several hundred years ago.

The thinking behind the design of the Freedom Trail is attributed to William Schofield, a former travel writer for the Boston Herald. He noticed that visitors eager to immerse themselves in the city’s historic past were having trouble finding the landmarks they were looking for. Schofield proposed a solution – Link the most important sites in a numbered sequence along a clearly marked, easy to follow trail that could be walked from end to end without the chance of getting rerouted or lost. There was also the idea that the Freedom Trail would’ve been a typical path to walk for the average colonist back in the day, further enhancing the sensation of traveling back in time.

As one of the most important cities instrumental in the forging of the republic Americans know today, the word ‘freedom’ takes on an even deeper meaning in the city of Boston. Rated by Forbes as one of the Top-Ten Best Tours in the city, Old Town Trolley Tours® has applied that concept to how their tours are conducted by offering all-day hop-on, hop-off access. That means you can get off at any of the 18 stops anywhere in the city and explore the surrounding area for as long as you like. When you’re ready to re-board, simply return to the nearest pick-up/drop-off point and hop-on for more Boston adventuring! When it comes to the famous Freedom Trail, the trolley is never too far away from either of the 16 places of interest outlined on the red-brick path. As a matter of fact, the trolley stops at many of the landmarks along the Freedom Trail, making it easy and stress-free to take it all in along with the rest that this magnificent city has to offer!

The Freedom Trail was the brainchild of local journalist William Schofield, who in 1951 suggested building a pedestrian trail to link together important local landmarks. These landmarks included Paul Revere’s house, the Old North Church, the Old State House, and the Old South Meeting House, all of which are historical gems. Schofield and then Boston Mayor John Hynes advocated for an organized route that linked them all together. Businessmen and women, elected officials, and non-profit organizations rallied together to designate a walking trail on Boston’s sidewalks in front of 16 historically significant locations.

Birth of the Freedom Trail

And so, the Freedom Trail was born. Just a few short years later, 40,000 people were walking the trail each year. And in 1958 the red line was added to clearly mark the trail. After being taken over by the National Park Service and being incorporated into Boston National Historical Park, the Freedom Trail was visited by more and more people. Today, more than three million people take the walk each year.

Where Does the Freedom Trail Start

The start of the Freedom Trail is Boston Common. The length of the trail is 2.5 miles (4.0 km) and takes about 90 minutes to complete, but if you want to visit the sites along the way, it can be a whole day affair. The end of the trail is at the USS Constitution Museum. If you’re driving there, parking is available at the Boston Common Garage.

What To See on the Trail

Each site offers a compelling look into the rich past of the American Revolution. Adults and children of all ages can learn the fascinating stories of the people, the places and the events that took place in colonial Boston as they walk the Freedom Trail.

A walk along the Freedom Trail can be experienced however you wish. If you’re one who likes to take your time, linger and learn; a self-guided tour may be just what you’re looking for. The Freedom Trail guides are another great way to see the sites and learn more about each one.

As one of the most popular historical tours in all of New England, the Freedom Trail’s Walk into History tours entertain and enlighten millions of guests each year. The 18th century costumed guides add a dramatic element to the tour; each one is a local Bostonian with a deep historical knowledge of the trail. You’ll hear intriguing tales of how the patriots and the colonists fought for freedom and how they succeeded in establishing what we know as the United States of America. Each tour is 90 minutes in length and is designed for individuals, groups, schools and more.

Old Town Trolley is a convenient way to explore The Freedom Trail while maximizing your vacation time. With multiple stops along the 2.5 mile historic trail, you can hop on and off at the sites you want to visit and learn about the rest during our fully narrated 90 minute historic sightseeing tour. Find the lowest price and money-saying packages by purchasing tickets direct through our website.

The Black Heritage Trail features various homes, memorials, and sites that are significant in the history of Boston’s 19th century African American community. The first slaves arrived in 1638 and by 1705 there were over 400.

Dedicated in 1806, the African Meeting House is the Oldest African American Church and was the First African Baptist Church. Over the years it also served as a school and a community meeting place. It was here that William Lloyd Garrison founded the New England Slavery Society, making it the center of the abolitionist movement. In 1972, the building was acquired by the Museum of Afro-American History and it was restored in 1987. Today, the museum commemorates African American history from slavery to the abolitionist movement, with a focus on educational equality.

Designed by architect Robert Twelves, the Old South Meeting House, one of the first stops along the Freedom Trail heading north, was built in 1792 in the red brick Georgian style with a steeple in the front and was originally a church. At the time it was built, it was the largest building in Boston and was the host to many gatherings that were too large for Faneuil Hall to accommodate. It holds a special place in the history of America as the place where Sam Adams and the Sons of Liberty rallied for support and organized the Boston Tea Party. Opened to the public in 1877 as a museum and meeting house, the Old South Meeting House, located between Washington and Devonshire streets along the Freedom Trail is one of the country’s first museums of American history.

The order came down directly from the lips of this nation’s first commander-in-chief back in 1794. George Washington wanted to fortify the nascent nation under his watch with a Navy. Six frigates were built, which included the USS Constitution. She was built entirely in Boston and was the largest building project the city had ever seen. Today ‘Old Ironsides,’ the name she acquired during the War of 1812, stands as the oldest commissioned warship in the world still harbored here in the place of her birth. No longer asked to defend a nation against foreign aggression, the USS Constitution, one of the last stops along the Freedom Trail north of the Charles River, serves the public by promoting understanding of the Navy’s role in war and peace through active participation in public events and education through outreach programs, public access, and historic demonstrations.

THE SITE OF THE BOSTON MASSACRE

On March 5, 1770, an angry mob gathered on Boston’s King Street demonstrating their rage over losing their jobs against the British Crown. Eventually, eight redcoats fired on the rabble resulting in several fatalities and injuries. This conflict became the rallying cry for patriots against their foreign oppressors by the likes of Paul Revere and Samuel Adams. The event caused the expulsion of British troops in Boston until their return four years later. The official marker on the Freedom Trail of this tide-turning event is located at the intersection of State and Congress Streets in Downtown Boston, outside the Old State House, a few yards away from where the Massacre took place. If you’re in town for a March wedding, you might be able to catch the reenactment that the Bostonian Society organizes for the public on the anniversary of the event.

As the oldest public park in the United States, the Boston Common is the starting point of the famed Freedom Trail. Much like New York’s Central Park, The Boston Common is located right smack in the city center and continues to be one of the most visited attractions, not just along the Freedom Trail, but in all of Boston. The story of this city and its people is firmly rooted in the history of this place beginning hundreds of years ago when the land was owned by its citizens and used as a grazing ground for cattle. After the Revolutionary War, the park became a popular locale for public speeches and rallies. Now, the Common offers a variety of activities and events, including theater and musical performances year round.

As the site of many game-changing historical events that helped galvanize a nation towards independence, the Boston Tea Party is widely-acknowledged as the tinder that helped spark a revolution. Located in the heart of the city’s Seaport District, this multi-sensory museum allows visitors to relive history with interactive exhibits, full-scale restored 18th-century ships, and a fully immersive tour led by a passionate team of historical actors that really puts the events commemorated by the Freedom Trail into perspective. As part of their commitment to bringing the events of this period into a sharper perspective, there is the opportunity to carouse with colonialists over a spot of tea and re-enact the Boston Tea Party itself!

2 months from today we’ll be throwing tea in the harbor at the 245th Anniversary and Annual Reenactment of the Boston Tea Party! How will YOU be participating? #huzzah #tossthattea #december16 #bostonteaparty #bostonhistory #americanhistory

A post shared by BostonTeaPartyShips (@bostonteapartyships) on Oct 16, 2018 at 2:16pm PDT