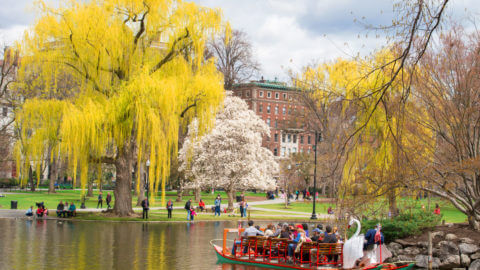 As a former Colonial city, Boston’s layout still accounts for many public spaces. These were very fashionable in an era that pre-dated modern forms of transportation or communication when the citizenry would have to gather outside a public house or square in order to be informed of the news of the day, socialize or form a mob and run someone out of town. Thankfully, those chaotic days of revolution are behind this magnificent city but its residents still enjoy being out and about in the city’s many plazas, squares, and green spaces. The following are some of the best places in Boston to enjoy the outdoors.

This large, open space opened to the public back in 1962 in conjunction with the inauguration of the newly constructed City Hall building. This plaza is very well known as a gathering place by the city’s locals for many of Boston’s bigger events such as the Boston GreenFest, Boston Techjam, The Puerto Rican Festival of Massachusetts and the Boston Cycling Celebration. With the city’s near 20-year dominance in three major professional sports, the plaza has hosted championship parades for the Boston Red Sox, Patriots, and Bruins. Fast forward to current day, and the historic plaza is at the center of a three-year revitalization plan. The first stage, launched in the summer of 2018, is called The Patio, a family-friendly locale adorned with couches with enough mini-golf, beer, ice cream, and puppies to keep everyone in a sunny mood.

Unless the only reason you visited Boston was because you missed your connecting flight and had a 24 hour layover, there’s a very good chance you’ve caught at least a glimpse of one of Boston’s most popular city centers. Named after portrait painter John Singleton Copley, this was supposed to symbolize culture and progress in 19th-century Boston as a place where its citizens could assemble and share ideas and engage in commerce. Today, Copley Square can be enjoyed as a brief stop-over or you can plan your whole stay in Boston just exploring its many important landmarks and structures. If you want to be surrounded by opulence and luxury, walk the lobby of the Fairmont Copley Plaza Hotel. This hotel is enjoying a return to magnificence thanks to a $20 million dollar renovation and you can see it in every elegant detail from its gilded vaulted ceilings down to its beautiful marble floors. Another must-see is the historic Trinity Church, built in the 19th century, which is ranked one of the top 10 buildings in the United States by the American Association of Architects. Artist John La Farge’s murals dominate the space along with many ornate stained glass windows giving parishioners and visitors the sensation that they are walking inside a painting. These are just a select few of the numerous landmarks to explore here and the rest read like a Who’s Who of the most iconic buildings in Beantown. The Old South Church, the Boston Public Library and the John Hancock Tower, New England’s tallest building, are all located here.

Wide elm tree-lined promenades, park benches, wrought iron gate work and a collection of prominent statues and memorials are all part of a stroll through this Boston public space. The mall’s 32 acres were designed in the French boulevard style by Arthur Gilman in 1856. The objective of the location planners was to enhance one of Boston’s most dignified and beautiful streets. It is hard to imagine that this area, known as the Back Bay, once had to be dammed to suppress the waters of the Charles River from flooding the area twice a day. After a huge landfill project, this Mall that runs along Beacon Street came to be. This prime people-watching, laid-back spot in the middle of Boston is home to a wide variety of trees like sweetgum, green ash, maple, linden, zelkova, Japanese pagoda and elm.

Established in 1925 and a recent beneficiary of a $2 million dollar renovation project, the Prado, also known as the “Paul Revere Mall” (so named for the dominating statue of the famous patriot located here), sits between Boston’s oldest church, the Old North Church on Salem Street, and St. Stephen’s Church on Hanover Street in Boston’s North End. This neighborhood is the city’s oldest and a bastion for the vibrant Italian-American diaspora that resides here – so grabbing a refreshing gelato or delicious meal is another great incentive to visit here. This urban mall also has a distinct European feel and a brick wall on the south side has historical plaques and a map of what this area looked like back in 1646. If your visit to Boston includes walking the famous Freedom Trail, this is a great place to relax and watch the world go by.

The Rose Kennedy Greenway is a mile-and-a-half long daisy chain of parks and green spaces in the heart of Boston that puts people in touch with the beauty of nature amidst an urban metropolis. One of these is Chinatown Park. A lovely oasis at the southern end of the Greenway, this one-acre linear park contains design elements drawn from Asian traditions and artwork. Designed by Carol R. Johnson and Associates, it contains a serpentine walkway edged by bamboo within bright red sculptural elements and a unique fountain that suggests a waterfall and shallow riverbed. This is a great place to watch some serious street chess, satiate your appetite with one of the many savory offerings available in the vicinity or just Zen out.

Horticulture and gardening figure largely in English culture and the Victorian era ushered in a whole new appreciation for the beautiful things that grow out of the ground. Established in 1837, the Boston Public Garden is landscaped to look decorative and flowery and, because of the new techniques of collecting, hybridizing, and propagating plants developed by the Victorians, you’ll see some rather dramatic plants and trees here. Admire the rich and unusual plants, the Lagoon, the monuments and fountains, and the Swan Boats created and operated for over 100 years by the Paget family.

Located in Norman B. Leventhal Park and resembling a verdant valley in the shadows of concrete mountains, this public square is where you’ll likely find bankers and executives with loosened ties enjoying a respite from their hectic schedules. Situated smack dab in the middle of Boston’s financial district, the 1.7-acre park features a cafe, fountains, and a pergola around a central lawn. Designed by landscape architects The Halvorson Company, the park is also home to 125 species of plants. You may be surprised to find out that underneath your feet is a massive parking garage built 80 feet below the surface, the deepest excavated point in the whole city.

As a city where innovation, industry, culture, and history blend into one, Boston attracts over 20 million visitors a year. With acclaimed museums, chef-driven restaurants, and a rich history that dates back almost 400 years!, Boston is the quintessential American city, and no one knows it better than us. Check out the video below and see why Forbes ranks this tour as one of the best in the world! Boston Attractions Must See Boston Architecture For Your Next Vacation 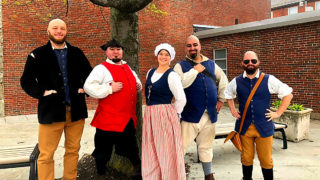 Boston Attractions Boston Field Trip Tours
Up Up
Back to top