Officially called Christ Church, the Old North Church is the oldest church building in Boston, a National Historic Landmark, and a stop on the Freedom Trail. Built in 1723, the Old North Church was inspired by the works of Christopher Wren, a British architect. It is most commonly known as the first stop on Paul Revere’s “Midnight Ride,” where he instructed three Boston Patriots to hang two lanterns in the church’s steeple. The lanterns were used to inform Charlestown Patriots that the British were approaching by sea and not by land.

The oldest existing house of worship in Boston, the Old North Church is forever immortalized by the Henry Wadsworth Longfellow poem Paul Revere’s Ride. It was from the steeple of this church that the signal lamps signifying “one if by land, and two if by sea” were held aloft. This prearranged beacon warned awaiting colonial militia about the movement of British forces toward Lexington and Concord. On the night of April 18, 1775, church sexton Robert Newman and Captain John Pulling climbed the 154 steps to the top of the eight-story steeple while fellow patriot Thomas Bernard stood watch outside. They held the lanterns aloft for less than a minute, but it was sufficient to signal waiting riders like Paul Revere and William Dawes who then galloped toward Lexington and Concord alerting Minutemen along the way. A plaque commemorating the event was affixed to the church’s exterior in 1878. Each year, more than half a million people tour this historic monument to liberty.

History of the Old North Church

Loyalty to the King

Officially known as Christ Church in the City of Boston, the Georgian-style building was constructed in 1723 by William Price. Its design was inspired by the works of famed British architect Christopher Wren who was instrumental in rebuilding London after the Great Fire of 1666. The edifice is modeled after St. Andrews-by-the-Wardrobe located in Blackfryers, England. During the Colonial era, the church was an Anglican congregation loyal to the king. A Tory minister guided the parish. King George II of England donated a Bible and silver religious items for use during worship services. The church used Anglican liturgy that included prayers for the king.

The 175-foot-tall, three-tiered spire was the tallest structure in Boston until the 217-foot steeple topping the Park Street Church surpassed it in 1809. Because it was such a prominent landmark, the steeple was chosen as the site for the famous signal. In 1757, John Childs strapped an umbrella-like device to his back and jumped from the spire. He landed safely several hundred feet away. The original spire was toppled by gale force winds in 1804. Famous local architect Charles Bulfinch, who also worked on the U.S. Capitol, designed the replacement, which was also destroyed by a hurricane in 1954. The current steeple is a replica of the original. It is capped by the same weathervane that adorned the top of the first spire.

The bell tower houses eight change-ringing bells that were cast in England in 1744. One bell bears an inscription annotating that they were the first bells cast for Britain’s American colonies. Although he was not a member of this church, Congregationalist Paul Revere served as a bell ringer here when he was a child. The church maintains a copy of a contract signed by Revere and five other boys in 1750.

In addition to the original white high-box pews, the interior of the church features various points of interest, including the window through which the two signaling patriots made their escape. Two parishioners built the clock in the rear of the church in 1726. Captain William Maxwell donated the figures of cherubim adorning the front of the organ and the two brass chandeliers. As captain of the privateer “Queen of Hungary,” he seized them from a French vessel in 1746. The crypt contains the remains of more than 1,000 parishioners, including Major John Pitcairn. The commander of British forces at the Battle of Lexington and Concord, he was mortally wounded while heroically rallying Royal Marines at Bunker Hill. The church also contains a bust of George Washington that the Marquis de Lafayette said was the closest likeness of the president that he had ever seen. The church grounds are home to several beautifully landscaped gardens.

The Old North Church is open for public tours. During January and February, the building is open from 10 a.m. until 4 p.m. From March through May as well as November and December, it is open from 9 a.m. to 5 p.m. From June through October, the church is accessible from 9 a.m. until 6 p.m. While admission is free of charge, a small donation is encouraged. A guided tour is available for $6 per person. Getting to the Church

On-street parking is limited in Boston’s North End neighborhood. The easiest way to reach the Old North Church is aboard Old Town Trolley. Hop aboard as you explore all that Beantown has to offer. Hop off at Stop #2 to visit the Old North Church, then hop back on the next trolley to continue to ride. You can also get to the church by public transportation. The Haymarket and North Station stops on the MBTA Orange and Green lines are less than a mile away. The Number 4 bus stops a few blocks away. The church is also a stop on the 2.5-mile-long Freedom Trail. Established in 1660, Copp’s Hill Burying Ground is the second-oldest landmark of its kind in Boston. During the Revolutionary War, British soldiers used the headstones for target practice and many of the grave markers still bear the bullet holes. Notable graves include religious leaders Increase and Cotton Mather as well as Edmund Hartt, whose shipyard built the USS Constitution.

The oldest existing residence in the city, the National Landmark Paul Revere House has been a museum since 1908. The three-story Elizabethan Tudor-style home was built in 1680. Featuring a variety of unique Colonial-era architectural details, the house is furnished with a variety of period pieces and Revere family heirlooms.

Paul Revere Mall is a small brick-paved park that contains a fountain and shade trees. Its most prominent feature is an equestrian statue depicting Paul Revere on his famous midnight ride. Sculpted by Cyrus Edwin Dallin, it is one of the most-photographed landmarks in Boston. 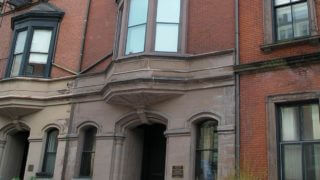 Boston Attractions Gibson House Museum
Up Up
Back to top