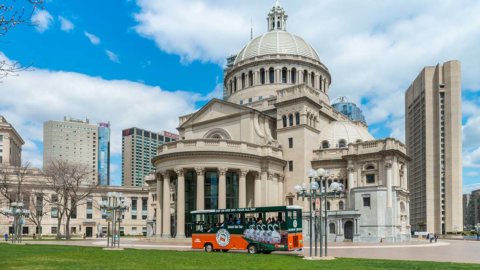 One of America’s most beautiful cities, Boston is well known for its many architectural wonders. 18th and 19th-century Federal style buildings and properties that have survived centuries stand side by side with many contemporary buildings – creating a remarkable fusion of old and new. Use this guide to help you plan your Boston vacation, including a visit to the most notable buildings and structures in the city and the most convenient trolley stops to each one. Originally constructed in 1724, Faneuil Hall is one of Boston’s most well-known landmarks. A gift to the city from local merchant Peter Faneuil, the building was designed in the style of an English country market, with an open square on the ground floor and an assembly room above. In 1826, it was expanded to include Quincy Market, which was designed in the Greek Revival style. During its earliest years, Faneuil Hall was home to meat and fish vendors and was the spot where local leaders spoke to the masses. It was the site of the Sugar Act of 1764 protest and where “no taxation without representation” was established.
Today, Faneuil Hall Marketplace includes Quincy Market, South, and North Market, and the historic Faneuil Hall set around a cobblestone promenade. Although its first stone was laid in 1724, it took 22 years for the construction to be completed of the Old North Church. The oldest church building in Boston, the Old North played an important role in the American Revolution – because it was in its steeple on April 18, 1775, that sexton Robert Newman climbed it and briefly hung the two lanterns that signaled the start of the Revolutionary War. When you visit, you’ll notice many of the church’s original features, including high brick pews, wooden statues of cherubim and more.

Downtown Boston’s oldest building, the Paul Revere House, was built in 1680 and was occupied by Paul Revere and his family from 1770 to 1800. Although the National Historic Landmark has been restored, 90% of the structure is original – including the flooring, foundation, windows, doors, and rafters. A tour of the property allows you to see period furnishings, an 18th-century kitchen and several items that belonged to the Revere family. A National Historic Landmark, the Harrison Gray Otis House is one of the first of the Federal style of architecture that became popular in the 18th century. Built in 1795-1796, it was designed by Charles Bulfinch for Harrison Gray Otis, a Massachusetts politician. The three-story brick house served as a family home and then later as a clinic and a boarding house. Take a tour to get an up-close look at the architecture and the beautiful interior which features brilliant colored wallpapers, high-style furnishings and more. You’ll learn about what life was like during this time period. Designed by architect Robert Twelves, the Old South Meeting House was built in 1792 in the the red brick Georgian style with a steeple in the front and was originally a church. At the time it was built, it was the largest building in Boston and was the host to many gatherings that were too large for Faneuil Hall to accommodate. It holds a special place in the history of America, as it was in this building that Sam Adams and the Sons of Liberty rallied for support and organized the colonists for the Boston Tea Party. Opened to the public in 1877 as a museum and meeting house, the Old South Meeting House is one of the country’s first museums of American history. The seat of the government and the oldest surviving public building in Boston, the Old State House is a must on your Boston vacation. Although not officially confirmed, it is said to have been designed by architect Robert Twelves. The building, made of red brick in the Georgian style, is one of the city’s most visited landmarks, as it was on its balcony that the Declaration of Independence was first read to the public. A tall, multi-part steeple with elaborate clear glass windows and lion and unicorn statues (symbols of royal authority) positioned on the gables are some of the most notable architectural features. A 19th-century row house located in Boston’s Back Bay, the Gibson House is a local architectural treasure. Designed in the Italian Renaissance style with its brownstone and red brick, this lovely residence maintains its charm and unspoiled beauty, complete with original furnishings of the well-to-do Gibson family. Inside, you’ll be awed by its elegant wallpaper, paintings, sculpture, photographs, silver, porcelain and more. A National Historic Landmark, the Gibson House is a must-visit while in the city. Built in 1900 for the Boston Symphony Orchestra, Symphony Hall is a National Historic Landmark and is considered to be one of the top three concert halls in the world when it comes to acoustics. Of particular importance when it comes to architecture is that every detail of the hall was designed with acoustics in mind. Its long, narrow and high shape, along with its shallow side balconies, coffered ceiling and statue-filled niches (16 Greek and Roman replicas) along three sides help ensure exceptional acoustics to every seat. Whether there’s a concert or not, Symphony Hall is one sight you can’t miss while in Boston. The fifth largest art museum in the United States, the Museum of Fine Arts in Boston is an excellent example of the Neoclassical style of architecture. Although you’ll want to spend a few hours perusing the hundreds of thousands of works of art (the collection is said to be 450,000 pieces from Ancient Egypt to present day), the building itself is a marvel to enjoy. It has undergone expansion throughout the years and now encompasses several different styles of architecture throughout, including its Japanese garden. Drawing inspiration from the 15th century Venetian Palazzo Barbaro, the Isabella Stewart Gardner Museum is simply breathtaking. An architectural masterpiece, the museum, although rumored to have been brought to America and reconstructed, was actually built from the ground up right where it stands in Boston. A Venetian palace with architectural fragments from European Gothic and Renaissance structures as well as many antique elements, the museum has an indoor garden courtyard that features a glass roof and is blooming with gorgeous plant life and flowers all year long.
Roam through the galleries and spend some time admiring the many take-your-breath-away architectural features of this beautiful museum. Christian Science Plaza is home to six buildings and a reflecting pool and encompasses 14.5 acres in the Fenway neighborhood. Among the buildings is the Mother Church, the First Church Of Christ, Scientist which was erected in 1894 in the Romanesque Revival Style. Notable features are its hand-laid marble floor, stained glass windows, and murals that weave around the ceiling. The second church building was built in 1906 in the domed Byzantine style to accommodate the church’s growing needs.
This opulent structure can seat up to 3,000 people in its theater-style auditorium. Be sure to take note of the themes in the stained-glass window, contrary to traditional church windows, these focus on healing, resurrection and women’s role as leaders in the church. A spectacular sight to behold, the Boston Public Library, in its Renaissance Revival style, is an architectural splendor built in 1895. The granite “palace for the people” features cathedral style reading halls and is home to a vast art collection, tapestries and of course, millions of rare books, manuscripts, and musical scores. The library is actually two buildings, the second, more modern one was built in 1972. Give yourself a few hours to take in the beauty of the architecture here as well as all that’s housed inside.