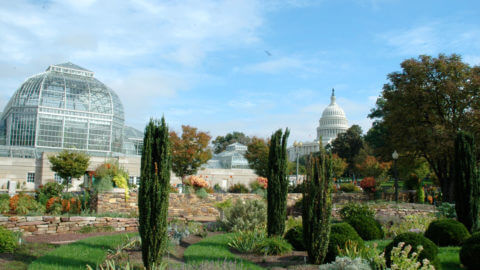 Established in 1820, the U.S. Botanic Garden is the oldest attraction of its kind in the country. Featuring state-of-the-art indoor greenery techniques, it displays approximately 4,000 seasonal, tropical and subtropical plant species. The mission of the Washington D.C. garden is to highlight the diversity of plants from around the world as well as their aesthetic, cultural, ecological and economic relevance. The Botanic Garden is committed to increasing the understanding of the irreplaceable value of plants within the ecosystem. In addition to the Conservatory, visitors can tour the National Garden and the landscaped Bartholdi Park.

A colorful and fragrant urban respite, the U.S. Botanic Garden traces its roots back to 1816 when the Columbian Institute for the Promotion of Arts and Sciences proposed the creation of a garden. The goal was an organization that would collect, cultivate and distribute plants from the U.S. and other countries that would aid the welfare of the American people. Political leaders such as George Washington, Thomas Jefferson and James Madison also championed the idea of a national botanic garden in the capital city in the late 18th century. Congress established the garden in 1820 on a site just west of the U.S. Capitol Building. The institution served in this capacity until 1837.

Five years later, the U.S. Botanic Garden was re-established when the Wilkes Scientific Expedition brought back numerous species of plants from the South Pacific and other parts of the world. The collection was initially housed in a greenhouse specially constructed behind the Old Patent Office. It was then moved to the former site of the Columbian Institute’s garden in 1850. The Botanic Garden was relocated again to its present site at the east end of the National Mall in 1933. It is administered by the Architect of the Capitol, who is responsible for its maintenance and operation. A Variety of Blooms

From orchids to roses, the U.S. Botanic Garden displays a wide variety of plant species native to rainforests, woodlands and meadows along with other ecosystems. Many of the specimens are rare and endangered plants. There is always something in bloom in this museum of living treasures from around the world. Visitors can view towering fruit and shade trees, graceful flowers and delicate seedlings tastefully displayed in and around the historic Conservatory.

The indoor galleries and gardens of the Conservatory feature plants from jungle, desert and primeval forests. The plantings span a wide array of colors, forms and fragrances. Displays include plants that are used for the production of food, fibers, medicine and cosmetics. You can view plantings from the tropics, the desert, Hawaii and the Mediterranean. In addition to an exhibit dedicated to the resplendent orchid, the Conservatory houses a children’s garden where younger visitors can play as they learn about plants. The outdoor National Garden at the U.S. Botanic Garden highlights trees, shrubs, flowers and other plants native to the mid-Atlantic region. There is also a rose garden, a butterfly garden and a water garden highlighting the contributions made by America’s first ladies. While the Lawn Terrace is a welcoming area for a variety of functions, the amphitheater hosts educational programs and provides a wonderful view of the Conservatory and the U.S. Capitol Dome.

The Conservatory and the adjacent National Garden are open daily from 10 a.m. until 5 p.m. Located on Independence Avenue, Bartholdi Park is open daily from dawn to dusk. Admission to the Botanic Garden is free of charge.

Getting to the Garden

Metered parking is limited near the garden, so driving is not recommended. Instead, hop aboard Old Town Trolley for a complete tour of Washington DC. Get off at the US Capitol stop, explore the garden and surrounding area, then join the next trolley to come around. You can also reach the U.S. Botanic Garden via public transportation. Take the Orange, Blue and Silver Metro rail lines to the Federal Center stop, which is three blocks away. Three surface bus routes stop behind the garden on Independence Avenue.

Housing Congress since 1800, the U.S. Capitol is recognized around the world as a symbol of American-style democracy. By adding new wings, the building grew along with the country. A tour of the Capitol includes the Rotunda, the Crypt and National Statuary Hall as well as several corridors lined with priceless works of art. The National Museum of the American Indian is dedicated to preserving and highlighting the culture of the indigenous people of North America. Based on a collection of more than 800,000 pieces, exhibits display the art, history, language and literature of the various Native American people.

The Smithsonian Air and Space Museum is one of the most-visited museums in the country. It chronicles the history of manned flight from Kitty Hawk to the moon landing along with space exploration to the outer reaches of the galaxy. In addition to an actual moon rock, the museum collection features historic airplanes and spacecraft as well as aviation and space exploration memorabilia.