See, feel and touch replicas of early humans, primates and even cyborgs. Journey to ancient Egypt and view rare tomb artifacts and Peruvian mummies. At the San Diego Museum of Man, you’ll see the history and the evolution of man come to life by visiting the many galleries and exhibits on display.

Situated just beneath the magnificent 200-foot California Tower, the museum is dedicated to anthropology, arts, culture and scientific achievements. The world-famous Museum of Man is the only museum of its kind in the area. Permanent collections like the Maya monuments and the Children’s Discovery Center delight visitors of every age.

Ultimate Guide to The San Diego Museum of Man

The San Diego Museum of Man is located in the historic California Building in San Diego’s Balboa Park. The museum’s mission is to ‘inspire human connections by exploring the human experience’, allowing visitors to explore various collections, exhibits, tours and classes.

Originally constructed for the renowned 1915 Panama-California Exposition, the building was designed with inspiration and influences from Gothic style and ideas borrowed from Mexican Spanish churches. Serving as the entrance point into the 1915 Exposition in San Diego, the building still remains architecturally significant today. In addition to the historic architectural style, flair and significance of the building, sculpted busts of historical figures, many which have had a direct influence on the city of San Diego, such as Junipero Serra (the father of California missions) have been added to the exterior of the building.

Although the building itself is a phenomenal structure, what holds greater significance to locals is the iconic three-stage tower. Blending artwork from Spanish and Mexican influence, the California Building is noted for its esteemed architecture and is included in the National Register of Historic Places as a part of the California Quadrangle. The museum exhibit, philosophy and forethought came from a group of San Diegans in 1915 who didn’t want to lose all of the art and discovery behind the original exhibit, The Story of Man through the Ages, that opened during the Panama-California Exposition.

Archeologists and researchers who were directly involved in the implementation of the first projects served as the museum’s first director and significant developers. These historians helped to record many histories of sites no longer in existence today. During World War II, the collections were stored and the museum was converted into a hospital. Today, Museum of Man collections are the base of exhibits, and research and discovery, and are still at the forefront of the museum’s philosophy. 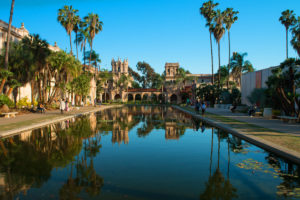 The Museum of Man, located in San Diego’s Balboa Park, is open daily from 10am – 5pm. There is a general admission price and one that includes a tour of the tower. All prices are available on the museum’s website. Every Tuesday, California residents (with valid ID) can visit select museums for free. There is available free parking in and around Balboa Park as well as valet parking in front of the House of Hospitality on El Prado. Balboa Park offers a free tram available to all visitors and is a great idea if visiting on a Tuesday, as parking might be limited. For those traveling by public transport, check out the schedules for buses numbered 3, 7, 120 or Rapid 215. All of these routes access Balboa Park and will require a bit of walking prior to arriving at the museum.

For educators of all kinds, the museum offers its kindergarten through twelfth grade education program providing self-guided and guided tours as well as art workshops. Pricing can be found on the museum’s website. There are also weeklong camps available for children in kindergarten through fifth grade. These half and full day programs help young adventurers delve further into the likes of archeology, discovery, architecture and cultures from around the world.

The museum is made up of a range of collections. Upon entering the massive rotunda of the museum, the two exhibits to the right and left are set center stage. On the right, there’s Beerology. Enticing to avid beer lovers and budding chemists, the exhibit showcases thousands of years of world beer history dating back to the early civilizations. Check out ancient artifacts of Inca kings and Amazon headhunters and learn the distinctive connections between ancient cities and craft brewing. To the left, you’ll find the Monsters exhibit. Turning night fright into international cultural legends, myths and creatures daily, this exhibit provides an interactive space to unleash your imagination. Learn truths of monsters and legends, explore the habitats of international monsters and their lure, find the healing powers of a unicorn and the smells of a Sasquatch, and learn of the moon cycles of a werewolf. A new exhibit (that requires an extra fee) is the Cannibalism: Myth and Reality exhibit. Suggested for 10 years of age and up, this family friendly exhibit goes beyond the ick-factor and showcases the choice of cannibalism in a very different light than what first comes to mind. Learn empathy, step into someone else’s shoes and see just what could push a person to the edge of this choice. Other exhibits focus on the Mayan culture, the Kumeyaay (Native Californians) and the origins of race and history of racism in America.

The Museum of Man is situated in Balboa Park. In the park alone, there are many family friendly things to do. Watch a game of lawn bowls, take in a free concert at the Spreckels Organ Pavilion or sign up for a drum lesson at the World Beats Cultural Center. Spend the day at the San Diego Zoo with animal friends from all over the world including koalas. Interested in branching out of the park? There’s much to choose and see in San Diego. Check out Hillcrest’s restaurant scene of quirky and unique cafes. Run over to North Park for a night out on Adams Avenue hitting the pubs, bars and breweries all with their own individuality. Or head downtown to check out all that the heart of the city has to offer. In spring and Summer, take in a baseball game with San Diego’s own major league baseball team, the San Diego Padres. In January, check out the Travel and Adventure show and in December check out the holiday lights all over town. If you’re traveling by car, head to the coast to dip your toes in the Pacific and let your spirits soar across the sand. Take a visit to Coronado Island’s Hotel del Coronado or watch the sunset at Ocean Beach’s pier. Hike the hills of Torrey Pines Natural Reserve or visit with the seals at La Jolla Cove. San Diego has heaps to enjoy – take advantage of it all. San Diego Museums Natural History Museum
Up Up
Back to top