Welcome to the Whaley House

Overwhelmingly praised as the first of its kind and the finest home in Southern California, the Whaley House was a central pillar of the 19th Century Old Town community. Besides being the Whaley family home, it was also San Diego’s first commercial theater, the county courthouse, and a general store. The legendary Whaley House is widely regarded as one of the most iconic landmarks in San Diego. From its rich Greek Revival architecture style and authentic decor to its mysterious past and unrivaled haunted pedigree, it’s no wonder this home attracts visitors from all over the world. Spend the day exploring the family home of Thomas Whaley and be transported back to San Diego life in the 1800s. Grab a memorable souvenir at the Verna House, located directly behind the Whaley House, and stick around for a delicious meal at the New Orleans Creole Cafe. See what makes the famed Whaley House an absolute San Diego must do experience!

Some of what you’ll see and learn when you visit the Whaley House. 2
Discover the numerous reports of ghostly sightings
Haunted Side 4
The grounds, featuring a lovely flower garden, are a county park and are free to the public.
The Grounds 5
Grab a souvenir at the historic Verna House, which houses the Whaley House Museum Shop.
Shopping 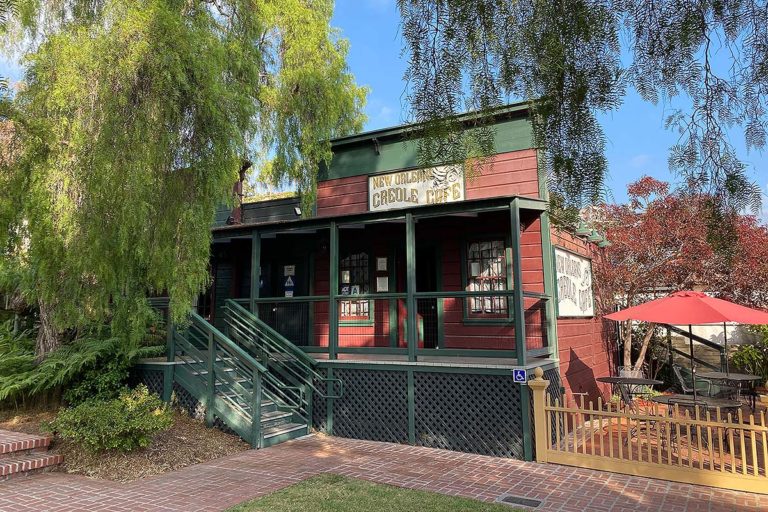 On May 6, 1856, Thomas Whaley began construction of his new home and proclaimed “My new house, when completed, will be the handsomest, most comfortable and convenient place in town or within 150 miles of here.” The two-story Greek Revival house was designed by Thomas Whaley and made from bricks created in Whaley’s very own brickyard on Conde Street. The house was the first of its kind and cost more than $10,000 when completed. Furnished with mahogany and rosewood furniture, Brussels carpets, and damask drapes, the Whaley House was overwhelmingly praised as “the first of its kind and finest home in Southern California.”

From 1869 through 1871, the Whaley House became the gathering place for the entire San Diego community. Besides being the Whaley family home, it was also San Diego’s first commercial theater, the county courthouse, and a general store. The home became such an integral part of the community that it was later the focal point in a battle between Old Town residents and New Town residents. The San Diego County government had been renting a portion of Whaley House for its offices and records. Whaley offered several times to sell the house to the county, but the offer was ignored. New Towners demanded that the county offices and records be moved to New Town. Despite threats of armed resistance from the Old Towners, the records were moved on March 31, 1871, effectively shifting the focus of the city to New Town.

Although the Whaley House was a communal treasure, it served primarily as the residential home for Thomas Whaley and his family. Unfortunately, tragedy continued to strike the Whaley family while they lived in the home leading to an increase in reported paranormal activity. In fact, the Whaley family told the San Diego Union shortly after moving in that they heard heavy footsteps in the house, which they believed to be the ghost of James “Yankee Jim” Robinson, who had earlier been hanged on the property for stealing a boat. Another tragic event, the violent suicide of Violet, one of the Whaley daughters, moved Thomas to build a new home in downtown San Diego and relocate his family.

In 1890, Thomas Whaley passed away in their new home on State Street, never to return to the original Whaley estate. Abandoned for close to 20 years, the Whaley House was neglected and in poor condition until Francis Whaley, their eldest son, decided to go back in 1909. After moving in, Francis set about restoring the property and entertaining tourists by playing his guitar and telling stories about the house’s background. In the years that followed, most members of the Whaley family returned to live and eventually die in their original family home, including Francis who passed away one year after his mother Anna, in 1913. The Pioneer Family of San Diego

Thomas Whaley arrived in California around 1849, during the famous California Gold Rush. Upon arrival, he set up a store with George Wardle on Montgomery Street in San Francisco. It was there where he sold hardware and woodwork from his family’s New York business, Pye & Whaley, as well as offering mining equipment and utensils on consignment. Born on October 5, 1823, the young entrepreneur came from a Scots-Irish family, which immigrated to Plymouth, Massachusetts in 1722. Alexander Whaley, Thomas’ great-grandfather, was a gunsmith and participated in the Boston Tea Party. During the Revolutionary War, he provided flintlock muskets for soldiers and the use of his house on Long Island by General George Washington. Thomas’ father, Thomas Whaley, carried on the family gunsmith business, and served in the New York Militia during the War of 1812. He married Rachel Pye, whose father, William, manufactured locks in Brooklyn.

Whaley’s entrepreneurial spirit and sharp business acumen, acquired in part from his education at the Washington Institute, helped him flourish in San Francisco. Thomas Whaley capitalized on his success by establishing his own store on Montgomery Street. After an arson-set fire destroyed his buildings on Montgomery Street in May 1851, he relocated to Old Town San Diego on the advice of Lewis Franklin, a merchant who operated stores in San Francisco and Old Town. Whaley set up various businesses with Franklin, Ephraim Morse, Francis Hinton, and even his brother, Henry, and amassed enough money to return to New York to marry his sweetheart, Anna Eloise DeLaunay, the daughter of French-born parents, on May 14, 1853.

Shortly after their marriage in 1855, Thomas and Anna returned to San Diego. It was then that Thomas Whaley purchased the land and set forth on his journey to build the finest home in California. By 1858, Thomas and Anna Whaley had produced three children: Francis Hinton (named for a business partner), Thomas (who died at just 18 months of age), and Anna Amelia. Later in life, the Whaleys welcomed three more children: George Hays Ringgold (named for a business partner), Violet Eloise, and Corinne Lillian.

Things to Do in Old Town San Diego 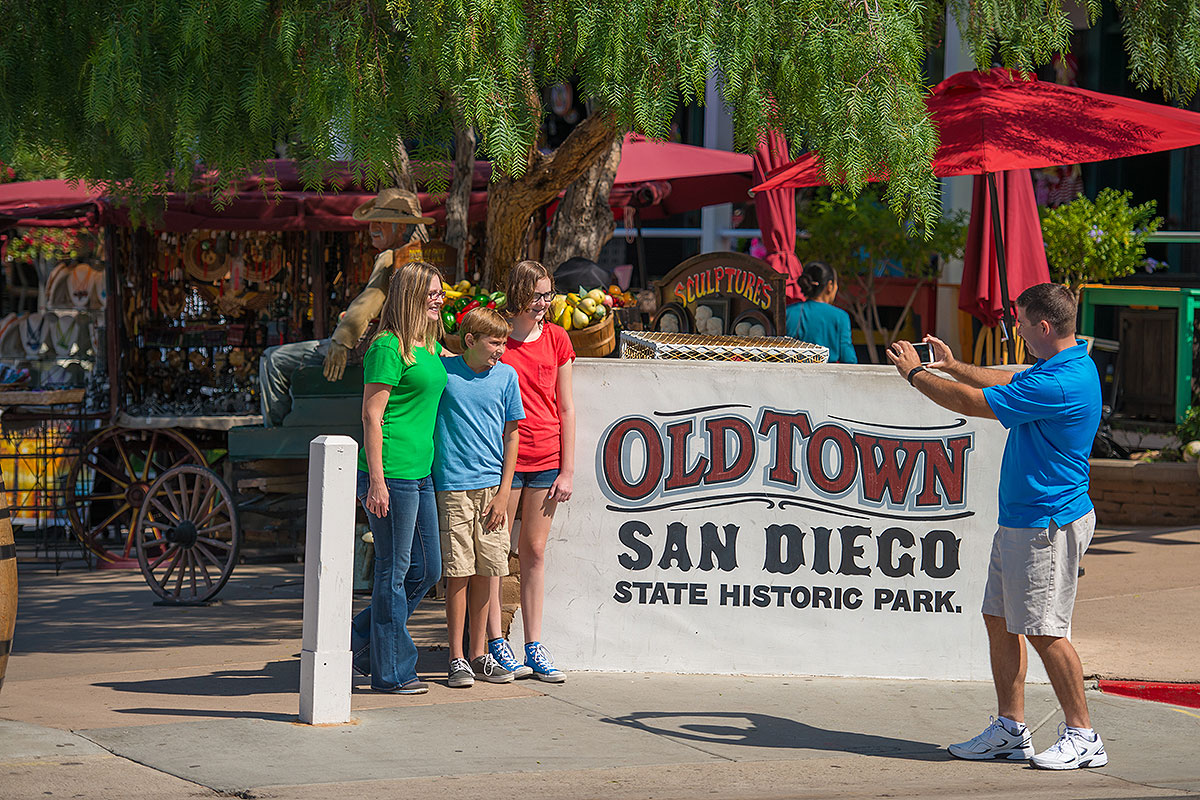 The Haunted Side of the Whaley House

When most folks think of San Diego, they picture undeniably gorgeous beaches, breezy beautiful weather and the vibrant cultural and artistic attractions. But for those who have an affinity for the paranormal, San Diego’s famed Whaley House is widely regarded as the most haunted house in America. With its rich and dark past, spine-tingling cases of spiritual encounters and inexplicable events, its haunted pedigree is second to none.

Although the Whaley family’s unfortunate past plays a key role in the Whaley House’s haunted history, many believed the home was destined doomed to be a paranormal location before construction even began. The property was infamous amongst the community as the site where local thief Yankee Jim Robinson was publicly executed. Thomas Whaley was nevertheless unfazed by the location’s grim history and continued to build his dream home. The eerie legacy of the Whaley House continued to grow as the family was struck by tragic deaths, as well as paranormal and spiritual encounters that many still experience today.

Learn more about the incredible haunted heritage of America’s Most Haunted House®.

Recognized as America’s Most Haunted House® and shrouded in mystery, ghost-hunters flock to the iconic Whaley House, grounds of the original Old Town gallows site. Join us on our after-hours, chilling paranormal investigation. You’ll have exclusive access to the very rooms where the Whaleys lived and died, not accessible to the general public tours.

This chilling new adventure gives guests exclusive access to the latest ghost-hunting equipment as they attempt to connect with lost souls. With the help of our experienced guides, each guest will be provided with and trained to use an array of traditional and state-of-the-art ghost hunting equipment or feel free to bring your own. With a wide variety of tools of the trade, you’ll attempt to find evidence of ghosts and other supernatural beings.

Join us for a spine-tingling evening unlike any other as you connect with the “other-side”.

Choose from our night tour or day tour.