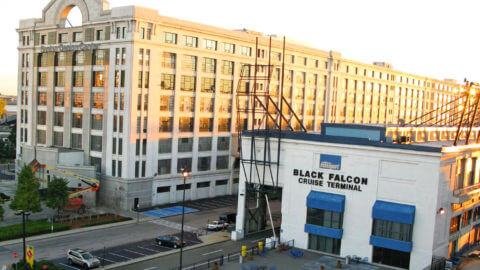 One of America’s most historically rich and attraction abundant cities, Boston is the destination of choice for travelers from all corners of the globe. A popular tourist hub, the cruise port is always brimming with activity with its nearly half a million visitors per year. Whether you’re arriving by cruise, departing on a cruise or a visitor who’s looking for ways to enrich your Boston vacation, the cruise port is an ideal starting point! Here’s a guide to help you plan out all you can see and do while in the area.

Things to Do and See

Put your feet onto the Freedom Trail!

Just a couple of miles from the Boston Cruise Port you can join the Freedom Trail at the Old North Church. One of 16 stops along this historic trail, the Old North Church is the oldest standing church in the city and earned its place in American history when its steeple was used by Robert Newman to signal Paul Revere and the other Sons of Liberty that the British troops were arriving. Immortalized in Henry Wadsworth Longfellow’s famous poem, the church is a National Historic Landmark and a “must-see” while visiting Boston.

Picture Yourself on a Midnight Ride

Another stop along the Freedom Trail, The Paul Revere House offers you a glimpse into the life and passion that led this American patriot to make his historic midnight ride. The quaint two-story colonial home is now a museum and National Historic Landmark and Boston’s oldest building. A tour will treat you to a view of colonial-era furnishings, interesting exhibits, some authentic Paul Revere silver items and a gift shop filled with crafts, books and much more.

Become a Patriot or a Loyalist

At the Boston Tea Party Ships & Museum, you’ll do more than you’ve ever done at any other museum. Here, you’ll be immersed in the events that took place that fateful night more than 230 years ago and even have the chance to dump tea overboard alongside the American patriots. You’ll be a part of a town-hall meeting, meet Samuel Adams and other patriots and learn everything about what transpired leading up to the American Revolution. This interactive museum includes holographic displays, one of only two remaining tea chests, the acclaimed multi-sensory documentary “Let It Begin Here” and much more. Discover the Institute of Contemporary Art

Home to some of the world’s most intriguing and talked about contemporary art, Boston’s Institute of Contemporary Art (ICA) is much more than an art museum. Its building, which is dramatically perched over the water, is revered by architectural connoisseurs around the globe for its beauty and the fact that it offers an open space for visitors to enjoy the museum’s offerings as well as its glorious waterfront setting.

Watch the Planes Take off on Castle Island

Although it’s technically no longer an island (it was connected to the mainland in 1928), Castle Island is one place where you can escape the bustle of the city without going too far. This 22-acre urban park is home to Fort Independence (originally built in 1634), a bastion that was built to defend the Boston harbor. Also here are Pleasure Bay (an artificial pond where folks like to swim), a playground, popular take-out restaurant Sullivan’s (try the clams cakes!), beaches, paths for walking and jogging and a great vantage point for watching the planes take off and land at Logan International Airport.

In Boston’s Seaport District, this popular brewery is where beer lovers can get to know one of the country’s leading IPA brewers. Harpoon Brewery, a staple in Boston since 1986, hosts tours, tastings and a variety of events throughout the year. Be sure to stop into their Beer Hall and munch on their delicious pretzels as you sip one of the famed brews.

Dining Near the Cruise Port

When in Boston, eating is more than just a meal, it’s an experience your taste buds won’t soon forget! And, as you’d imagine, around the Cruise Port, the options are infinite, offering a myriad of cuisine choices for every palate. You’ll be able to sink your teeth into everything from a juicy steak or hamburger, to all kinds of seafood, salads, sandwiches and international eats. Here’s some of the top restaurants in the area:

For a relaxed and casual experience, walk up to the counter at Pete’s Dockside and savor an array of breakfast, sandwiches and fried seafood. Mouthwatering specials include fried haddock, chicken parmesan lasagna, fish cakes, shepherd’s pie and more.

Enjoy tableside guacamole, frosty margaritas and the lively atmosphere of this well-known Mexican restaurant. From their tacos to their enchiladas and quesadillas, Rosa’s menu is chock full of delectable choices for brunch, lunch and dinner.

Brunch, lunch, dinner or just a lite bite at this chic spot cannot be beat. Sourcing local ingredients and serving them up in an array of creative dishes, Tamo is a popular dining destination for locals and visitors alike. Sample such delicacies as crispy salt and pepper calamari, scallops, North End Pizza, a spicy tuna roll (and other sushi), clam chowder and many other menu items.

An Italian eatery that serves up homemade recipes that have been handed down generations, Nebo will fulfill your craving for pastas and other classic dishes, but created with a modern twist. They even serve gluten free pizzas and pasta!

As you can imagine, finding the perfect souvenir, clothing, accessories, gifts and anything else you’re looking for while in Boston is easily attainable within just a few minutes of the Cruise Port. Here’s a list of some of the top spots for shopping: Close to the Cruise Port, this National Historic Landmark once served as a marketplace for fishermen, merchants and vendors and as a soapbox for leaders including Samuel Adams, James Otis and others to rally support for their efforts. Established in 1743, Faneuil Hall is now home to 100 shops, including locally owned boutiques and national recognized retailers, as well as a large assortment of pushcarts featuring art and other unique items. And, if you’re thirsty or hunger hits, you’ll be in luck; Faneuil Hall has numerous restaurants and pubs as well as a vast food hall in the Quincy Market Food Colonnade featuring many choices. 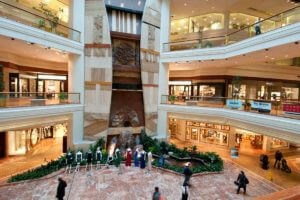 Exuding luxury and opulence, Copley Place is where you’ll have the opportunity to purchase clothing, jewelry, accessories and more from world-class retailers including Tiffany & Company, Tory Burch, Neiman Marcus, Chanel, Coach, Jimmy Choo and many more. This exquisite shopping destination draws visitors from around the world and never disappoints even the most discriminating shopper. 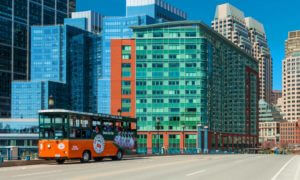 See it all Aboard the Old Town Trolley

Although the Cruise Port is within a couple of miles of many of Boston’s most popular attractions and historic sights, your best bet to see it all is to take the Old Town Trolley Tour. The orange and green trolley picks you up just outside the cruise terminal and will transport you to more than 100 points of interest. Because you can hop on and off and stay as long as you wish at any of the stops, you can enjoy and explore the city at your own pace. You’ll also have the benefit of all the knowledge and entertainment of the onboard conductor and the option to extend your tour over two days! Complete Guide to Back Bay Boston
Up Up
Back to top