Washington DC is home to some of the most remarkable and recognizable architecture in the world. From its many monuments, memorials and museums to the numerous government, historic buildings and private residences, a diverse and eclectic array of architecture exists throughout the city. While you’re vacationing in the nation’s capital, you’ll want to include some of the city’s most iconic and interesting attractions on your itinerary. Here’s a quick guide to DC’s architectural wonders. Union Station is considered one of the finest examples of Beaux Arts architecture in the city. Built in 1907, the station is a major transportation hub and a National Historic Landmark. The building, in its Neoclassical style, features a vaulted entryway and coffered ceilings with gold leaf embellishments, Diocletian windows and a main concourse that is 760 feet long—considered the longest single room in the world.

The National Gallery of Art is actually two buildings; each one offers strikingly different styles of architecture. The original West Building was designed in 1937 of pink Tennessee marble in the Neoclassical style and the more modern, geometrical East Building was designed in 1978. The East building is a stark contrast to the west, with its trapezoidal shape divided by two triangles.

Designed by Native American architect Douglas Cardinal, the National Museum of the American Indian is notable for its beautifully sculpted design. The building’s curvilinear form evokes a wind sculpted rock formation and is deeply connected to nature and the earth.{ For this very special museum, the Smithsonian Institution wanted a design that would fit in well with the other structures on the National Mall and be capable of housing enormous aircraft and many other large historic artifacts. The result is a bold architectural structure made of four marble-encased cubes created with pink Tennessee marble and connected by three glass and steel atria. Just across from the National Gallery of Art, the Air and Space Museum is worthy of a view and visit!

The building of this unique museum is a work of art, enveloped in the very culture and rich heritage of its contents. The architecture, considered classical Greco-Roman, has a base and shaft and is topped with a corona, inspired by Yoruban art from West Africa. The entire building is wrapped in an ornamental bronze-colored lattice that traces its roots to the ironwork of enslaved African-Americans. Yes, there’s an actual, authentic castle in Washington DC and it’s a sight you definitely want to see. Built in 1855, the Castle was the very first Smithsonian building, designed by James Renwick, Jr. who also designed St. Patrick’s Cathedral in New York City. The building is made of Seneca Red Sandstone and is inspired by late Romanesque and early Gothic architectural styles. Now home to the administrative offices of the Smithsonian Institution, the Castle has a visitor center and a crypt, the final resting place of James Smithson, the Smithsonian’s founding benefactor.

Another example of the Neoclassical style of architecture, the National Archives building was constructed between 1931 and 1935. Home to the original Declaration of Independence, the Bill of Rights and the United States Constitution, as well as many other historically significant documents, this building is one of the most visited in the city. The building itself is breathtaking, with its iconic façade and the Rotunda for the Charters of Freedom, among other notable features. Originally built in 1800, the US Capitol Building has been rebuilt, renovated and expanded many times over in its long history. One of the world’s most recognizable buildings and known for its massive dome and breathtaking Neoclassical style, the Capitol has many fascinating architectural features including an underground tunnel system that provides an easy passageway between the legislative offices, the Capitol, the Capitol visitors center and the Library of Congress.

Known for providing some of the best views of the city, the Old Post Office is now a part of the Trump International Hotel. Listed on the National Register of Historic Places, the Clock Tower and the Post Office are exceptional structures designed in the Romanesque Revival architectural style and definitely worthy of a view while visiting DC.

A modern icon among so many historic buildings on the National Mall, the Hirshhorn Museum building was designed to be a piece of artwork in and of itself. A hollowed-center elevated cylinder, the contemporary building floats above its lovely landscaped grounds and features curved galleries. The drum-shaped structure is eye-catching and stands out among its many Neoclassical neighbors in the area. Nearly 556 feet tall and made of marble, granite and stone, the Washington Monument was the tallest structure in the world when it was built and today is still one of the most famous landmarks in the country. The laying of the monument’s cornerstone (by Abraham Lincoln who was little known at the time), included a box with a portrait of George Washington, a copy of The Constitution, some US coins and a newspaper. The obelisk is a symbol to all Americans and a memorial to one of the nation’s most important founding fathers, George Washington. It’s also one of the most photographed icons in the city! Perhaps one of Washington DC’s most famous structures, the Lincoln Memorial is inspired by the Greek Temple Parthenon and dedicated to the 16th President of the United States, Abraham Lincoln. There are 36 columns that symbolize the 36 reunited states at the time of Abraham Lincoln’s death and the entire structure is rife with symbolism and meaning. The memorial contains three chambers, one featuring a massive statue of the President and two internal chambers that commemorate the Gettysburg Address and his Second Inaugural Address on the walls. Located on the northwest corner of the Tidal Basin, this striking memorial features the Stone of Hope which is a 30-foot-high granite statue of Dr. Martin Luther King, Jr. The statue sits past two other pieces of granite that are meant to symbolize the Mountain of Despair from King’s famous speech.

The home of George Washington, Mount Vernon was built by his father in 1735. The more than 11,000 square foot mansion sits on 7,600 acres. Over his lifetime, Washington expanded and refurbished the estate many times over and today the plantation serves as a celebration to his life and career. The mansion itself is considered one of the finest examples of the British-Palladian style, with 21 rooms and the grounds are home to numerous gardens, museum galleries and a host of other intriguing sites. Designed after the Pantheon of Rome, the Thomas Jefferson Memorial is an original adaptation of the Neoclassical style of architecture. A beautiful tribute to the third president of the United States of America, the memorial is a circular, open-air structure that features a shallow dome supported by a circular colonnade with 26 columns. A bronze statue of Jefferson holding the Declaration of Independence stands in the middle of the memorial (which has numerous symbolic features) inscribed with his date of birth and death.

A remarkable example of contemporary Scandinavian architecture, the House of Sweden is home to the embassies of Sweden and Iceland in Washington DC. The building, with its floor to ceiling windows, exudes openness and transparency, the well-known ideals of Sweden itself. An indoor waterfall, etched glass as well as several art pieces adorning the walls are a part of the structure’s unique charm.

Strikingly different from many of the conservative buildings in Washington DC, the Mead Center for American Theater stands out for its contemporary abstract design. The 75-foot-long cantilevered roof sweeps horizontally, dramatically projecting its tip at the site’s west end pointing toward the Washington Monument. A floor-to-ceiling glass curtain wall, tilted slightly outward, wraps around the street façades and beautifully reveals the center’s design. Definitely a sight to see while in the city!

Built between 1890 and 1897, this architectural wonder is the oldest of the three United States Library of Congress buildings. It is designed in the Beaux Arts style and is notable for its granite façade and elaborately decorated interior. Approximately 470 feet long, three stories high and adorned with a gilded “torch of learning” atop its dome, the Jefferson Building is among the most beautiful in the city.

A city marked by its incredibly diverse architecture, you’d be hard-pressed not to get a glimpse of some of DC’s most treasured structures. Aboard the TROLLEY TOUR, you’ll have the opportunity to see many of these buildings—and to learn a little about their history.

See It All With Old Town Trolley Tours

With over 30 years as a valued member of the DC community, Old Town Trolley Tours knows the District inside and out. With over 100 points of interest on the itinerary, we’ll take you past the very best of DC from revered monuments to world-class museums. And the best part is you’ll be able to see it at your own pace. Check out this video and see why our Hop-On, Hop-Off tours are considered among the best in the world. 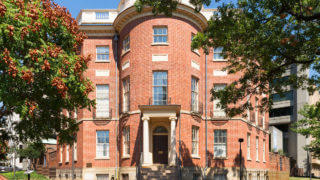 Old Stone House
Up Up
Back to top