Things to Do in San Diego This Summer 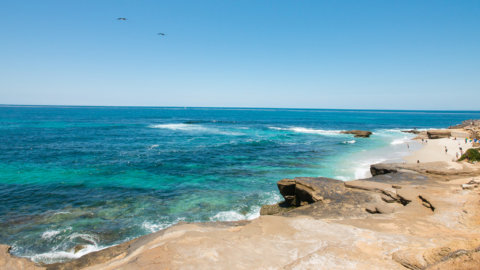 Thinking of a visit to “America’s Finest City” during the summer months? With median summer temps in the low 80s during the day, little if any rain, and pleasantly cool temps in the 60s at night, San Diego is an ideal summer destination. In addition to almost perfect weather, enjoy these fun, summer attractions and activities during your stay.

With 19 gardens, 17 museums, 13 recreation venues, nine performing arts arenas, nine various attractions and play spaces, restaurants, dog parks, and trails, San Diego’s Balboa Park offers something for everyone. Balboa Park’s land has been set aside for almost 150 years and has racked up quite the array of family-friendly activities, including summer Food Truck Fridays, where people of all ages can enjoy live entertainment and a unique, rotating selection of gourmet food trucks. Surviving fires, wars, and strife, this mega green space at the city’s center now provides beautiful sights and fun things to do in an alternative outdoor oasis. Offering cultural growth, enrichment, relaxation, community building, educational programs, family-friendly entertainment, sporting programs, creative activities, exercise, mindfulness spaces, and more, Balboa Park welcomes everyone and is open 365 days a year. Check out this must-see attraction on your next vacation to San Diego.

As the West Coast’s premier entertainment district, guests can immerse themselves in rich Victorian architecture and history, dine at restaurants led by world-renowned chefs, and dance the night away at nationally-recognized nightlife venues. Tucked tightly into 16 and a half blocks, the Gaslamp Quarter is a walkable, urban playground located in Downtown San Diego adjacent to the Convention Center, Petco Park, and Horton Plaza. And getting here is as easy as a Southern California breeze. The Gaslamp area is accessible via the freeway and several trolley and bus lines. This is a must-do if you enjoy being out and about.

See “America’s Finest City” from the land and the sea aboard San Diego SEAL TOURS.
This popular adventure offers visitors a one-of-a-kind opportunity to view San Diego’s best sights in a whole new way! This distinctive Hydra-Terra vehicle is road-ready and seaworthy all at once, with an open-air cabin that offers you panoramic views of San Diego. The Embarcadero, U.S.S. Midway, The Star of India, and the breathtaking panorama of the city from the safety of the relaxing waters of San Diego Bay are all on the agenda. And, of course, there’s always a chance you’ll encounter some cute, rotund seal lions sunbathing without a care in the world. This is a whole different level from your average bus tour.

This huge, 12-acre green space that some call San Diego’s front porch is comprised of several distinct areas where different activities can be enjoyed. The centerpiece of the project is a 40-foot wide, 830-foot long, and 1-inch deep fountain. Resembling what some describe as the country’s biggest wading pool, this is a hotbed of activity for children of all ages to splash around as the 31 jets gush water up into the air. And, in true California, eco-friendly style, the water is recycled and treated daily. Among the other zones within the park, you’ll find areas custom-built for the younger ones with cool obstacle courses, modern jungle-gyms, a rock wall, steep slides, and skateboards mounted on springs. There are Garden Rooms that feature an array of flowering plants, carved out paths, and places to sit and watch the world go by.

Just across the bay from downtown San Diego, Coronado Island beckons visitors with its pristine beaches, crystal waters, and friendly beach town persona. It’s here that the historic Hotel Del Coronado has been luring guests since 1888 and where those with an affinity for the beach, the ocean, fine food, and eclectic shops gather to relish in its delightful amenities.   To gain a true appreciation of this magnificent place, take a bike tour. The Coronado Cruise Bike Tour offers fun and adventure for everyone ages 12 and older. This 10-mile ride takes you under the Coronado Bridge, past the historic Hotel del Coronado, and allows you to see many other picturesque spots. The entire tour is bike-friendly, as flat terrains make it a relaxing ride. Afterward, if you want to dial into beach bum mode, Coronado Island offers a plethora of choices for fun in the sun. There are five white sand havens on the island including Coronado Central Beach, Coronado Dog Beach, Glorietta Bay Beach, Silver Strand State Beach, and the Ferry Landing Marketplace. Each beach has its own unique personality and provides a perfect way to enjoy the magnificent San Diego climate.

Sightseeing opportunities await you at the Embarcadero waterfront. Throughout the year, there are numerous events, concerts, art shows, and festivals taking place in and around the area. Whether you’re in town for a few days or longer, make sure this popular spot along the San Diego Bay is on your itinerary. From the Embarcadero, climb aboard the massive U.S.S. Midway, a decommissioned aircraft carrier that now serves as a naval museum. On display are 60 exhibits, 29 restored aircrafts, and several interactive experiences – including flight simulators – where visitors of all ages can take to the skies!

No tour dates currently available. Please check back in 2023.

Surrounded by beach towns, majestic cliffs, and 70 miles of pristine coastline, the beaches of San Diego are a world unto themselves and the best way to explore them is on the La Jolla & San Diego Beaches Day Tripper Tour. Get comfy as the trolley climbs to the top of Mt. Soledad for an excellent overlook of La Jolla proper. Wind back down Pacific Coast Highway and pay a visit to the Children’s Pool where seals frolic in the sand and the dramatic seven Sisters Caves. La Jolla’s beauty begins on its sandy shores. Discover this charming beach town and its neighboring areas. Just a short stroll through the Village and you’ll be treated to some of the finest shopping, galleries, and dining anywhere in Southern California.

If you get the urge to take yourself shopping after all of the sightseeing, the city has many shops to choose from at the open-air Old Town Market. From folkloric art to one-of-a-kind souvenirs from the Pacific Ocean, there’s nothing like the Old Town Market. Here, you’ll be able to browse over 40 unique shops that specialize in handcrafted items from Mexico as well as contemporary fashions. Buy a cool Mexican wrestling mask at Blanket Supply or check out the accessories and clothing for women at the Amore Collection! Casa de Aguirre is an important landmark within the Old Town Market as it displays the life and traditions of the settlers of Old Town, San Diego’s first city. The home of Don Jose Aguirre and his family, the original adobe home was built in 1853. Don Jose later gave the building and all his land to the Catholic Church. Father Antonio Ubach used the home as a site for an industrial school for Indians. Although the original structure was destroyed in 1914, it was reconstructed and now serves as a free museum at the entrance of Old Town State Historic Park. Numerous artifacts are displayed throughout the museum, telling the story of the influences the original inhabitants of Old Town had on San Diego and southern California during the mid-1800s.

Don’t even THINK about leaving San Diego before visiting the Old Town Market! A little shopping…a little eating…who’s in?! ☀️🍴

The Star of India was built in 1863 and is the world’s oldest active sailing ship. The ship sailed from Great Britain to India and then to New Zealand before becoming a salmon hauler from Alaska to California. The magnificent ship was lovingly restored after its retirement and became an official historic landmark that still sails at least once a year. Today, the Star of India is a part of the Maritime Museum of San Diego. Visitors from all over the world can tour the ship and learn about its fascinating history.

The Scripps Institution of Oceanography was founded in 1903 and is one of the oldest and largest centers for global science research. Visitors can tour the facility and view the Birch Aquarium and numerous exhibits that teach about the wonders of the ocean and marine species. Educational programs, events, and live animal interactions are offered throughout the year.

Have a sleepover adventure in one of 46 comfy, safari-style tents that border an expansive grazing area for giraffes, rhinos, gazelles, antelopes, and other exotic animals at the remarkable San Diego Zoo Safari Park. Book a Flightline Safari—strapped securely into a zip-line, you’ll soar as high as 130 feet above all the animals below. You can even record the entire experience with a helmet cam to relive your experience at home. Also on offer are exhilarating Balloon Safaris and a Jungle Ropes Safari for kids 7 and older to test their balance and jungle skills on rope bridges, tightropes, and more.

Back in 1970, a bunch of granola-eating comic book nerds banded together to organize an event that would celebrate the pervasiveness of comic books, sci-fi, and fantasy genres in popular culture and they haven’t looked back since. Today, this monster gathering of people from all walks of life beckons fans that dress to look like their favorite comic book, graphic novel, Manga, or movie character, artist, actor, and anyone and anything thing connected to that world. For those comic book enthusiasts, this is nirvana.

If you’re looking to celebrate Independence Day in America’s Finest City, you’ll find no shortage of ways to do just that. Easily, the event with the most bang has got to be the massive fireworks display that takes place right on San Diego Bay called the “Big Bay Boom.” Just find a spot on Harbor Island, Shelter Island, Seaport Village, the Embarcadero, or Mission Bay, grab that lawn chair or towel, and look toward the heavens for a show so popular that the local FOX affiliate broadcasts it live!

Got a few bucks burning a hole in your pocket and want to lay it on a long-shot to win? Spend part of your day taking in the beautiful weather and watch the ponies run at the second largest horse-racing track in the western United States. When the Del Mar Racetrack first opened in the 1940s, it was a destination frequented by the movie stars and entertainers of the day. Some of the most popular events that take place at the racetrack, in addition to the races themselves, are: Opening Day with its beloved hat contest, Friday Night Concerts, Family Fun Day on the weekends, and their Giveaway Days. For parents of young children, they even offer a daycare center.

For three days in June, the biggest beer festival in California holds court at the Del Mar Fairgrounds about 20 miles north of San Diego. Here, you’ll find over 200 brewers from all around the world debuting their latest creations, food pairings, and beer stages where the science of brewing is explained. You can even head to the midway and enjoy the rides at the largest county fair in the United States!

The three-day, Labor Day weekend is a time when those who live on either coast migrate to their local beaches for some fun in the sun. If you happen to be in San Diego, head out to Broadway Pier and marvel at the craftsmanship on display at the U. S. Sand Sculpting Challenge and 3D Art Expo. You won’t believe your eyes when you behold the delicate and intricate things people can forge with the same sand you dip your toes in. There’s also live music, food, and lots of non-sand artwork at the 3D Art Expo.

And there you have it. Our drop-everything-that-you’re-doing-and-go-see list of places that make San Diego a one-of-a-kind vacation destination! Happy travels!