What’s Open Right Now in Nashville? Top 10 Things to Do While Social Distancing Situated southwest of downtown, Music Row is home to several open businesses and attractions related to the city’s musical heritage. Considered the heart of Nashville’s entertainment industry, the Music Row area is centered on 16th and 17th Avenues South, which are known as Music Square East and West respectively. Points of interest in the district include the historic RCA Studio B, Columbia’s Historic Quonset Hut, the first recording studio on Music Row, and Owen Bradley Park as well as numerous shops and upscale eateries. “Musica,” a large bronze statue designed by Alan LeQuire, is the centerpiece of the Music Row Roundabout. Tracing its roots back to the 1800s, the Farmers’ Market is open right now and stretches from Jackson Street to Harrison Street along Rosa Parks Boulevard adjacent to the Bicentennial State Park Mall. Covering 16 aces, the market hosts farmers, artisans and other merchants as well as eateries, a weekend flea market and various special events. The North and South Farm Sheds house stalls dedicated to fresh produce and other local goods while the Market House is home to a variety of retail shops and eateries. Open year-round, the market is busiest during the May to November growing season.

There are many paths to take in life; if you can, make sure some of them are dirt. Some of those best paths or trails can be found within the surrounds of the city, at the nearby parks and lakes of this major music city. Whether it’s your first time or fiftieth, you’re sure to know that time spent on the trails is never wasted. Grab your hiking shoes, water, sunscreen and hat and you’re on your way to an adventure you’ll be sure to remember. Located south of downtown, the Gulch is a renovated, historic neighborhood that features upscale restaurants, fashionable boutiques, and vibrant entertainment venues. It attracts locals, college students, and visitors. The area is also home to Two Old Hippies, an eclectic retailer offering a variety of hipster and vintage clothing and musical instruments. While the walls are lined with memorabilia, the store’s centerpiece is a converted VW microbus. Two Old Hippies contains “The Vault,” a multi-purpose 3,000 square foot space that was a bank vault in its former life, is used as a studio space for photo shoots and audio recording.

Take a walk on the wild side as the residents of the Nashville Zoo at Grassmere come out of hibernation at this sprawling state-of-the-art animal park. View rhinos, tigers and giraffes as well as birds, amphibians and reptiles. The park also features a historic Greek Revival-style mansion. Containing a full-scale replica of the original statue of Athena, the Parthenon was constructed in 1897 for the Tennessee Centenary Exposition. The 42-foot tall Athena Parthenos sculpture is the tallest indoor artistic work of its kind in the Western Hemisphere. While other exposition buildings were removed, the Parthenon was preserved as a museum. In addition to its elaborate statue, the building houses sculptures and paintings by 19th- and 20th-century American artists. A precise copy of the original Parthenon in Athens, the edifice sits atop a rolling hill in Centennial Park adjacent to a duck pond. Located in the heart of downtown in the shadow of the Tennessee State Capitol, Bicentennial Capitol Mall State Park is open now. Patterned after the National Mall in Washington, D.C. it opened on June 1, 1996 to commemorate the 200th anniversary of the Volunteer State’s admission into the Union. Bordered on the north and south by Jefferson Street and James Robertson Parkway, the 19-acre park is bounded on its east and west sides by the northern sections of Sixth and Seventh Avenues. This expansive memorial to the state’s bicentennial celebration introduces visitors to the history and natural beauty of Tennessee. 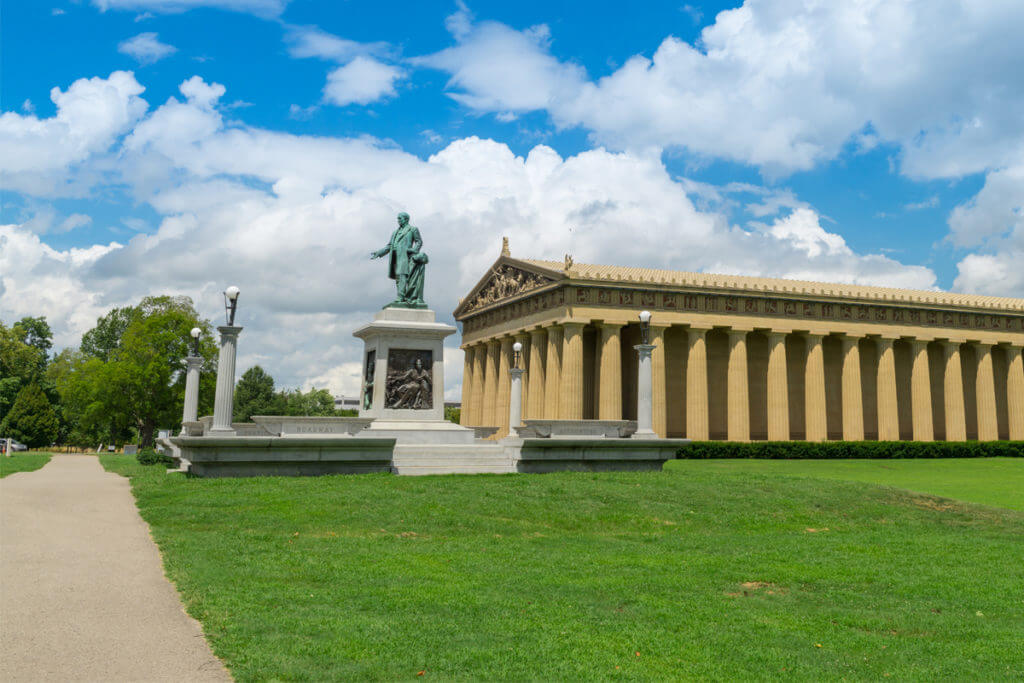 Situated in Nashville’s West End Neighborhood, Centennial Park is a lush oasis that offers a tranquil respite from the glittering lights of Lower Broadway, Music City’s Honk Tonk Highway. One of the most beloved parks in town, this gorgeous natural setting occupies 132 acres. The site has served as a fairground, a racetrack and the location for the 1897 Tennessee Centennial and International Exposition. The recreation area welcomes visitors of all ages with a variety of attractions and activities. Cheekwood is considered one of the finest American Country Place Era estates in the nation. Formerly the family home of Mabel and Leslie Cheek, the extraordinary 1930s estate, with its Georgian mansion and 55 acres of cultivated gardens and expansive vistas, today serves the public as a botanical garden, arboretum, and museum with historic rooms and art galleries, showcasing works from its 7,000 piece permanent collection as well as traveling exhibitions. The property includes 12 distinct gardens and a mile-long woodland trail featuring a large-scale modern and contemporary outdoor sculpture. Cheekwood is a perfect place for visitors of all ages. Enjoy some peace and respite in the newly-renovated Blevins Japanese Garden, let your children explore and play in the Bracken Foundation Children’s Garden, and marvel at the larger-than-life sculptures on the Ann & Monroe Carell Jr. Family Sculpture Trail. Cheekwood is listed on the National Register of Historic Places, accredited by the American Alliance of Museums, and is a USA Today Top 10 Botanical Garden.

And now you can visit the new Chihuly exhibit at Checkwood, it features large-scale installations in the gardens of the historic estate as well as pedestal works presented in the art galleries. Outdoor installations include two pieces on the newly-accessible Ann & Monroe Carell Jr. Family Sculpture Trail, as well as two new, site-specific works created for this exhibition. A monumental sculpture is on view in the Frist Learning Center Great Hall.

Open in Nashville right now, the Old Town Trolley is a great way to explore many of the unique sights and attractions that Music City has to offer. The trolley is also a convenient way to travel between locations on your travel itinerary. Old Town Trolley Tours Nashville is not currently social distancing on tours. Traveling a loop around the city, a trolley arrives at each stop every few minutes. Stay on board for a fascinating and entertaining narrative about the city, or you can hop off and experience Nashville at your own pace while avoiding the hassles of driving and finding a place to park.

The Soul Of Music City Tour Open right now, experience the true heart of Nashville aboard our new Soul of Music City Tour! It’s an evening filled with music, history and fun and a close-up view of some of the most legendary spots in town. Printers Alley, Ryman Auditorium, Municipal Auditorium & Musicians Hall of Fame, Rhythm & Blues heritage of Historic Jefferson Street, Music Row, Station Inn, and The Gulch. You’ll explore the places that have set this city apart and the ones that pay homage to the many who have come here looking for fame and fortune. You’ll hear the stories and anecdotes full of the country charm and folksy wisdom that Music City is known for. The Soul of Music City Tour is not currently social distancing. Bicentennial Mall State Park
Up Up
Back to top