What’s Open Right Now in Washington DC? 15+ Things to Do While Social Distancing Spread across 600 acres of rolling hills and beautiful gardens, Arlington National Cemetery Tours by Old Town Trolley is the only tour operator authorized to give tours at this esteemed site. Because of its sheer size, this tour provides an ideal way for guests looking to see the entire property in a manageable amount of time. With limited seating to maintain proper social distancing, our open-air trolleys are the perfect way to discover the cemetery’s history, the heroes who rest there, and other stories from your knowledgeable guide. Aboard the continuous 45-60 minute loop, you’ll have the opportunity to disembark and explore the grounds. Don’t miss your opportunity to experience one of the most informative and awe-inspiring tours during your visit to Washington DC. The National Gallery of Art was created in 1937. Through the generosity of Andrew W. Mellon, a financier who was also a public servant, the Museum gained its first collection. Mellon had a passion for art and his large collection of old master paintings, sculpture and other works were intended for all of America to enjoy. After his death, Congress accepted his collection and thus the National Gallery was born.

Honoring the 16 million people who served in the United States Military during the war, the more than 400,000 who died and the countless others who supported our troops from home, the World War II Memorial is a stunning tribute to the sacrifices that were made. 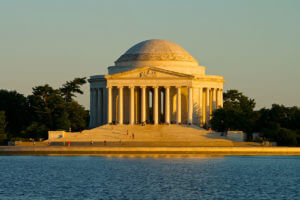 A tribute to the third President of the United States, Thomas Jefferson, the Jefferson Memorial is a recognized symbol of democracy and independence. As one of the founding fathers of our country and the author of the Declaration of Independence, Jefferson’s significant impact on the shaping of our government is known throughout the world.

Often referred to as the wall that heals, the Vietnam Veterans Memorial beckons visitors of all ages, races and nationalities. It was created to honor and remember the men and women who served in the Vietnam War and to help our country heal after the controversial, emotional conflict ended. The enormous black wall lists 58,209 names of those who are missing or were killed during the war. 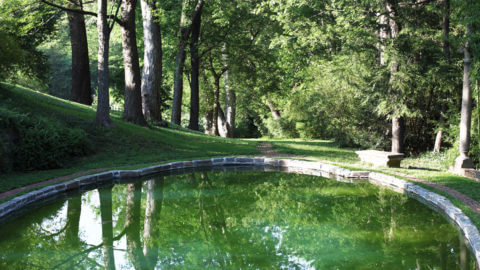 Home to over 440 acres of parks and gardens in Washington DC. Boasting one of the largest collections of bonsai trees in North America, these gardens contain the National Herb Garden, National Bonsai and Penjing Museum and the Flowering Tree Collection. Wander the miles of trails or take the open-air tram for a tour of the area.

The FDR Memorial is located along the Western edge of the Tidal Basin, between the Lincoln and Jefferson Memorials. Built in 1997, the memorial is known for its unique design, its tribute to our 32nd President, Franklin Delano Roosevelt, and for the fact that it tells the story of America during the years of FDR’s Presidency. Four outdoor rooms portray the President’s terms in office, each with different statues and quotes. Beginning with a likeness of him riding in a car during his first inaugural speech and ending with him seated in a wheelchair, the memorial traces his twelve years of office as well as the many changes our country went through during that era. The US Navy Memorial is a truly spectacular tribute to those who served or are currently serving in the nation’s sea services. A stunning plaza paved in granite forms a 100-foot diameter of the world. Fountains, pools, flags and historic panels surround the deck of the plaza tracing the achievements of the Navy, Marines, Coast Guard and Merchant Marines. The famous Lone Sailor statue stands as a representation of the men who joined the service to fulfill their patriotic duty; a striking sight, it is perhaps one of the most well-known aspects of the memorial.

Offers some of the best views of all of Washington DC. With spectacular vistas along the Potomac River, this open park is a great spot for whimsical wandering, picnics, bike rides and skating adventures.

Just 16 miles outside the city, Mount Vernon is the place where George Washington lived for more than four decades. Today, visitors can tour the first floor of the mansion, see Washington’s Tomb and walk the grounds of his expansive plantation. The mansion, built in 1735 by George Washington’s father, was originally a one and a half story farmhouse. But throughout his lifetime, George expanded and enhanced the home, and today it is three stories and 11,028 square feet, ten times the size of the average home in colonial Virginia. The estate also includes museum exhibits, a working blacksmith shop, a 4-acre demonstration farm and more. A fascinating look at the life of our first president, Mount Vernon makes for an unforgettable day trip while visiting our nation’s capital.

Close to the National Mall, puts visitors smack in the center of all things cherry blossom. This man-made inlet that sits next to the Potomac River is the perfect spot to wile away the hours on a paddleboat or take in the beauty of the seasons. In spring, visitors to the famed festival find themselves in the perfect spot to take in all of the magic of the cherry blossoms. Part of Anacostia Park. Located along the east bank of the Anacostia River, this beautiful spot is filled with hiking trails and boardwalks enticing visitors year round. Play a round of golf, test your skill at the driving range, bird watch, hike, canoe, or enjoy the company of a friend. Visit in summer for the beautiful spectacle of the water lilies in bloom.

Offers some of the best views of all of Washington DC. With spectacular vistas along the Potomac River, this park is a great spot for whimsical wandering, picnics, bike rides and skating adventures. 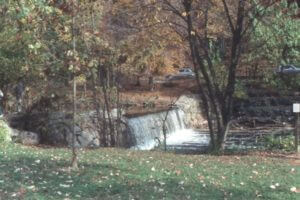 A 1700-acre park established in 1890. It’s filled with serene, wooded trails that transport visitors away from the political hubbub and into a space of peace and tranquility. Here visitors can visit the planetarium and nature center, take a horseback riding lesson or a trail ride, play a round of golf, take in a show at the Carter Barron Amphitheater or spend an afternoon with a plethora of animals at the National Zoo. Approximately 40 plus acres of gorgeous gardens. Set on the highest point in Georgetown, this park area is filled with hiking and running trails that follow behind many of the local embassies. In late spring, the full bloom of the peonies welcome visitors.

A 12-acre urban park that was established in 1912. This National Historic Landmark is home to a beautiful and welcoming tiered fountain. Home to a statue of Joan of Arc, Dante and a memorial to President Buchanan, this space has been hosting a drum circle on Sundays in the summer for the past 50 years. A waterfront park with a boardwalk running along the Anacostia River. Home to well-known ‘outdoor rooms,’ visitors to this park can wander near the dancing fountains at the entrance that welcome visitors to this special space. Dates back to the 18th and 19th centuries. This open historical spot is a great place to meet up with friends, host family picnics, take a bike ride, spend hours fishing or taking in the beautiful scenery. To see the monuments, museums, the most popular points of interest and attractions take a tour. The Old Town Trolley Tour of Washington DC is open right now and shows you more than 100 points of interest and is fully narrated. We have trolleys coming and going throughout the day, so you can see the sights and your own pace. 12 Top Washington DC Parks
Up Up
Back to top